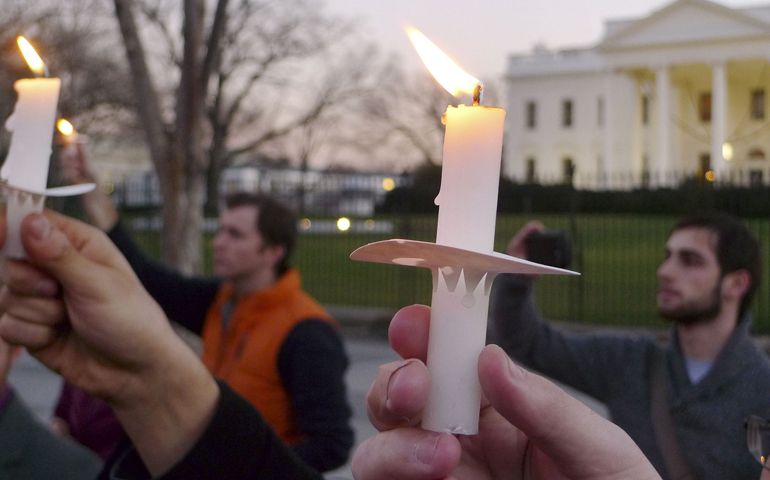 Supporters of gun control legislation hold candles during a rally in front of the White House in Washington Dec. 14 after the shooting at an elementary school in Newtown, Conn. (CNS/Reuters)
This article appears in the Gun Violence feature series. View the full series.

Boston researcher David Hemenway says we should regard gun violence as a public health threat and tackle it like we tackled the hazards of motor vehicles, cigarettes and poisons. All three products continue to circulate in society, but we have found ways to make them safer, he told a forum on gun violence in early January at Harvard University co-sponsored by the school and Reuters News Agency.

Hemenway, the director of the Harvard Injury Control Research Center at the School of Public Health, said applying public health strategies to the uniquely American ailment of gun violence sidesteps the contentious issue of gun ownership and focuses on injury prevention instead.

When trying to reduce the hazards of a consumer product, public health practitioners think it is more useful to look at what caused the injury rather than who, Hemenway explained during a recent interview on a Boston public radio program. Asking those questions has often led to product redesign.

In some ways, he said, Americans "are in the same place with guns today as we were with motor vehicles in the 1950s, because then car manufacturers tried to say it was really all the driver's fault. 'Cars don't kill people; people kill people' was the implicit mantra."

It wasn't until public health physicians began inquiring into the causes of car injuries that we realized people were being speared with steering columns and having their faces ripped apart by shattered glass, Hemenway said. Today, car manufacturers can't make cars without seat belts, collapsible steering columns and windows made of safety glass.

Hemenway said he hopes for a similar evolution with gun manufacturers.

The United States has a "horrific gun problem," Hemenway said at the forum. Guns kill 85 Americans a day and wound several hundred, he said, and firearms are the second leading killer of American youth after automobiles.

The high tally is not because American society is unusually bloodthirsty, he said. When compared to other developed countries, the US rate for crimes like assault, robbery or sexual attack is average. But the United States has "by far the most guns, the weakest gun laws and the most homicides," he said.

In other words, what distinguishes American violence is its lethality. Hemenway said the abundance of guns in US households coupled with lax gun laws and a lack of safety measures means that crime, acts of passion, domestic disputes and attempts at suicide often end in fatalities.

In an online essay Jan.7 for the Journal of the American Medical Association, "Curbing Gun Violence: Lessons From Public Health Successes," Hemenway, epidemiologist Dariush Mozaffarian and pediatrician David Ludwig made a dozen recommendations for reducing gun harm based on successful public health strategies. These included:

Any harm-reduction strategy for guns would also require changing social norms, the essay states. Hemenway and his colleagues point to successful campaigns against smoking and drunken driving of the last 50 years as providing positive precedent.

However, designing effective public health policies to prevent gun injuries and fatalities requires data, and that has been hard to come by. According to Hemenway, during the Gingrich Revolution of the mid-1990s, the National Rifle Association wanted to eliminate all firearm research at the Centers for Disease Control and Prevention.

From 1986 to1996, the agency sponsored peer-reviewed studies on the underlying cause of gun violence. Among the findings: People who kept a gun in the home for protection faced a 2.7-fold greater risk of homicide and a 4.8-fold risk of suicide than those in similar homes without guns.

Following those findings, Congress cut $2.6 million from the CDC's injury budget, the exact amount the agency had been spending annually on gun research. The move has had a chilling effect on firearms research ever since, Hemenway said.

Even the CDC's Behavioral Risk Factor Surveillance System, which interviews more than 200,000 households about aspects of public health, has had to eliminate all questions about firearms, he said. By contrast, a wealth of information is collected by a variety of agencies after every automobile accident and research for traffic safety is well-funded.

Last year, Congress prohibited the National Institutes of Health from funding projects that "advocate or promote gun control." Researchers say the prohibition, which came after an NIH-backed study drew links between alcoholism and gun violence, sends a signal to federal research agencies to steer clear of studying guns.*

To compensate for the data deficit on gun harm, Hemenway and the Harvard Injury Control Research Center created the National Violent Death Reporting System in 1998. The database collects information about violent deaths, including those by firearms. The CDC has since taken over its administration.

"It's a great system with all this really rich data, but it is only in place in 18 states because of a lack of funding," Hemenway said.

While lawsuits against the tobacco industry have been used to curb the health hazards of smoking, no such option exists for reducing gun violence. The Protection of Lawful Commerce in Arms Act of 2005 grants the firearm industry broad immunity from consumer liability, which eliminates incentives for manufacturers voluntarily to make their products safer.

There are "100 patents out there for childproofing guns," Hemenway said, but the gun industry, more interested in profit than safety, has resisted implementing them.

Hemenway said he hopes the horror of the deaths in Newtown, Conn., will inspire changes in addressing our "crazy gun situation in the United States."

"If not now, when?" he asked. "85 people a day are dying so what do we do? Throw up our hands and just throw people in jail? God forgive us if we don't do something now."

[Claire Schaeffer-Duffy is a longtime contributor to NCR based in Worcester, Mass.]

(*Editor’s Note: An earlier version of this story said that a provision in the 2010 Affordable Care Act restricted doctors from questioning patients about their gun use. Among the executive actions to reduce gun violence that the President Obama announced Jan. 16, is a item 16, which reads: “Clarify that the Affordable Care Act does not prohibit doctors asking their patients about guns in their homes.”)

The hope of Easter and Pentecost in a nuclear age