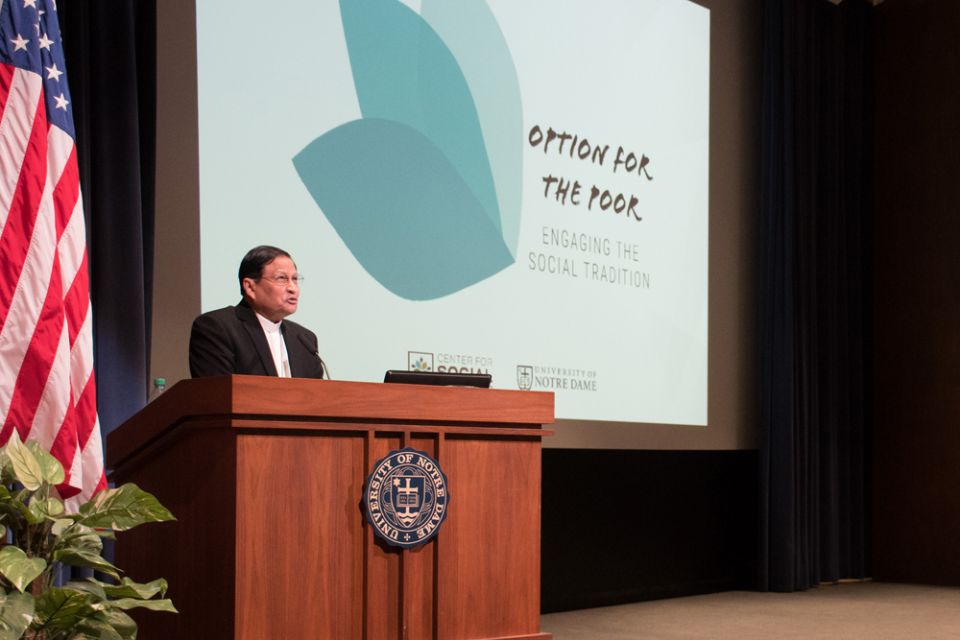 Notre Dame, Indiana — Poverty is a "manmade disaster" that demands a response on the scale of a "third world war," Cardinal Charles Maung Bo of Yangon, Myanmar, told a conference on Catholic social teaching.

"Poverty is not natural, as rain or snow. People are made poor, kept poor," he said. "Poverty is the mortal sin of modern times."

But instead of putting economic and environmental justice front and center, "rich countries are hijacking the discourse from the poor," the cardinal said.

"Celebrating victimhood by the rich and the other privileged classes is fast becoming a national infatuation," he said.

Bo, the first cardinal from the country formerly known as Burma, urged wealthier countries to turn from their internal culture wars toward compassion for the poor and hungry.

"Without belittling psychological, spiritual and mental suffering of the millions, we need to regain the discourse of the poor, their suffering," he said.

"Human suffering has one generic binary: haves and have nots," he said. "Celebrating other victimhoods can wait."

Bo was a keynote speaker at the March 21-23 biennial conference on Catholic social tradition, sponsored by the Center for Social Concerns at the University of Notre Dame. This year's theme was "Option for the Poor."

The cardinal praised the university and conference organizers for bringing attention to the plight of the poor and for asking him to speak on "A Bridge across Continents in Fellowship with the Poor."

"This is not an era of bridges, but walls," he said, adding that both have become "political artillery."

"When arrogance of political and economic powers enthrone themselves on citadels with a culture of indifference, my bountiful praises are for your moral courage to bring the tears and brokenness of the poor once again to center stage," he said to the nearly 350 attendees.

Bo also criticized the so-called "prosperity gospel" in the United States, which has "repackaged" Christ's message of charity and justice.

"One of the reasons [people in the] East will never be enthusiastic about Christ is how he is presented by modern-day evangelical pastors," he said. "The Bible is not about prosperity. It is about justice." 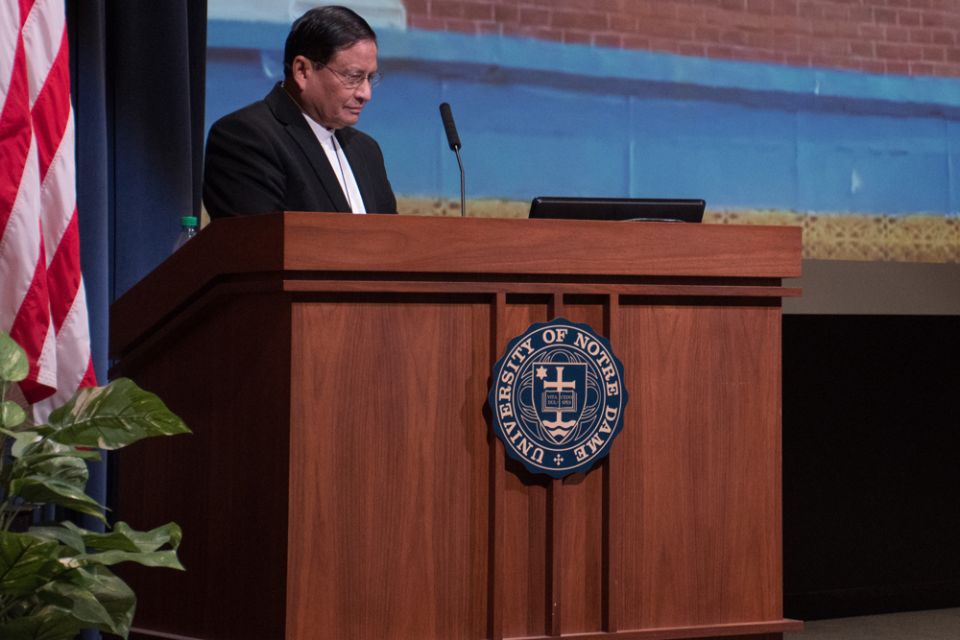 He highlighted the nearly 15,000 children under age 5 who die every day from hunger and malnutrition, and the millions of undernourished and hungry people in developing countries, while rich countries waste billions of pounds of food.

Quoting Pope Francis, he reminded the audience that "throwing food away is like stealing from the tables of the poor, the hungry."

Despite natural riches of gold, jade and minerals, Myanmar is one of the three poorest countries in Asia, the cardinal said.

"Option for the poor is not an option in Asia," Bo said, but rather a requirement. He said the church has aligned itself with the poor and powerless in his country, where Catholics make up less than 2 percent of the population.

"We are small but we are a confident church," he said, adding that Catholics were buoyed by Francis' visit in November 2017.

Related: Francis tells the world: 'The presence of God today is called Rohingya'

He urged Westerners to "listen to the cry of the poor and the cry of the earth," and to build bridges at a time when "insecurity, isolation and nationalism threaten to tear the fabric of the human family."

With Catholic social teaching as a road map, the church can facilitate more "people-to-people dialogue" to increase understanding, Bo said.

"America needs to understand other parts of the world," he said.

Another conference speaker, Dominican Fr. Gustavo Gutierrez, also emphasized that poverty has human causes. Unfortunately, "still people believe that is not the case," he said, through an interpreter.

He spoke about the "complexity" of poverty, which includes racism and "despising people who are not like me, those who are seen as not being human."

Gutierrez first explored the "preferential option for the poor" in his groundbreaking 1971 book A Theology of Liberation: History, Politics, Salvation. Now 90 and living in Lima, Peru, Gutierrez returned to Notre Dame for the conference and for festivities celebrating the newly canonized St. Oscar Romero.

The priest — who also received the Center for Social Concerns' Micah Proclamation — warned against "very devout Christians who go to Mass on Sunday [who] keep forgetting the voice of the poor and don't pay attention what's going on in the world."

Economist Charles Clark of St. John's University in New York also saw poverty as the result of human action. "The best way to help poor countries is to stop stealing from them," he said. "Poor countries subsidize the standard of living in rich countries."

Theologian Lisa Sowle Cahill of Boston College called for an "option by the poor" to overcome a lack of political will, which she sees as a "social expression of sin."

"Momentum for structural change has to involve cultural transformation at multiple levels or there will not be broad buy-in to generate political will," she said.

Justice | Cardinal from Myanmar: Poverty is a manmade disaster

The 'culture of prosperity'