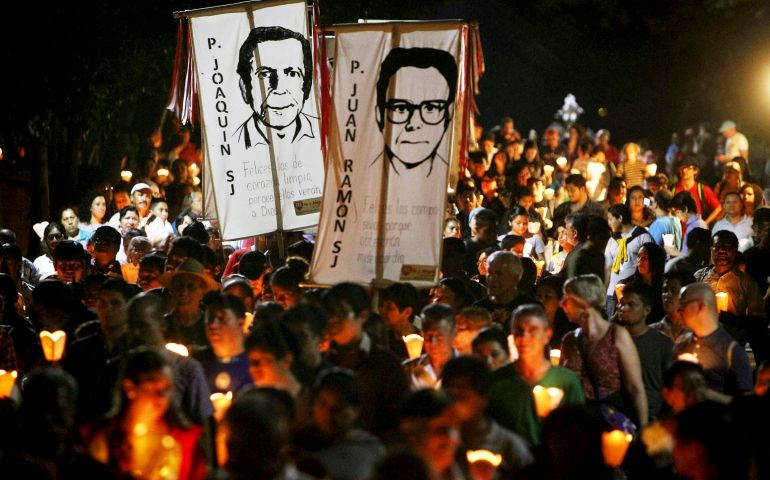 People participate in the "little lanterns march" at Central American University in San Salvador during the 2015 commemoration of the 26th anniversary of the massacre of six Jesuit priests and two women, murdered in November 1989. (CNS/EPA/Oscar Rivera)

Continuing court delays are making it unlikely that the U.S. government will extradite a former Salvadoran army colonel to Spain to stand trial for the massacre of six Jesuit priests, their housekeeper and her daughter.

Fifteen months have passed since a U.S. magistrate ordered the extradition of former Col. Inocente Orlando Montano to Spain. Five of the slain priests were citizens of Spain, which wants to prosecute Montano and more than a dozen other Salvadoran officers for the atrocity.

In her landmark ruling, Magistrate Kimberly Swank concluded the evidence showed that Montano participated in the planning of the "terrorist" act. At the time of the November 1989 massacre, Montano was vice minister of defense for public safety, in command of the National Police, the Treasury Police and the National Guard.

Montano's lawyer appealed Swank's ruling on April 1, 2016, in a federal district court in North Carolina where he is being held. More than a year later, U.S. District Judge Terrence Boyle has yet to rule on the appeal.

"It's outrageous," international human rights attorney Carolyn Patty Blum told NCR, referring to the inaction on the case, along with the latest wrinkle on May 11 when Boyle said he may release Montano from jail due to health reasons while he's deciding the case, only to reverse himself five days later, saying Montano will remain incarcerated.

A decision on the appeal is long overdue, said Blum, who served as the key legal adviser for the Center for Justice and Accountability, which filed the original petition in the Jesuit case with the Spanish court.

Boyle "has had this case for a solid year, a ludicrous amount of time, and he waited over six months before ordering a hearing," said Blum, who founded and directed the International Human Rights Law Clinic at Berkeley Law, University of California, and currently oversees the Cardozo Law Institute in Holocaust and Human Rights.

Montano, now in his mid-70s, has long sought to be released from jail after having surgery for bladder cancer.

Blum has opposed his release, saying that his chronic health issues "can be managed from his cell and he should remain incarcerated. We're talking here about mass murder, about conspiring to commit a massacre — one of the worst crimes in El Salvador's history — not securities fraud."

Swank's extradition order was lauded by international human rights groups. It raised hopes that Spain could finally uncover the full details of the case and dissolve more than a quarter century of impunity enjoyed by heretofore-untouchable high-ranking Salvadoran military officers, many with close ties to the U.S. military.

Montano is the highest-ranking official in recent U.S. history to be ordered extradited for human rights violations.

Swank stated that the evidence showed that Montano attended the key meetings where the high command plotted the assassination of Jesuit Fr. Ignacio Ellacuría, along with all witnesses.

Ellacuría was the rector of the University of Central America, where the priests were slain by a U.S.-trained unit using high-powered weapons. At the time, he was a key negotiator trying to mediate a peace between the U.S.-backed, right-wing Salvadoran government and the Farabundo Martí National Liberation Front (known by its Spanish acronym, FMLN).

Of the 26 officers cited for the Jesuit massacre by the U.N. Truth Commission, 19 were graduates of the U.S. Army's School of the Americas, now known as the Western Hemisphere Institute for Security Cooperation.

Montano was not only a graduate of the Army school, but also of the Jesuit university where the priests were executed.

Montano, who has denied any involvement in the massacre, entered the U.S. in 2002 after lying on immigration papers, falsely stating that he had never been a member of the Salvadoran military.

In addition to being at key meetings where the murders were planned, Swank noted that Montano oversaw the government radio station that made threats against Ellacuría, calling him "an armed terrorist and an intellectual figurehead for the rebel FMLN."

She also cited evidence that Montano "threatened the wife of a witness who asked how it was possible that the government could issue an order to kill the Jesuits."

Swank's ruling rejected the core arguments in the appeal, which raised no material issues that Montano had not raised before, Blum said, making Boyle's inaction harder to grasp. "He is now the sticking point."

Either side can appeal Boyle's ruling to the 4th Circuit Court of Appeals, which would further delay the extradition.

In addition to court delays and questions of Montano's health, there's also the requisite that the secretary of state review the case. He has the final say over whether Montano is sent to Madrid.

True change requires input of everyone, not just the powerful, pope says