Cuban bishops call for dialogue as island reels from protests 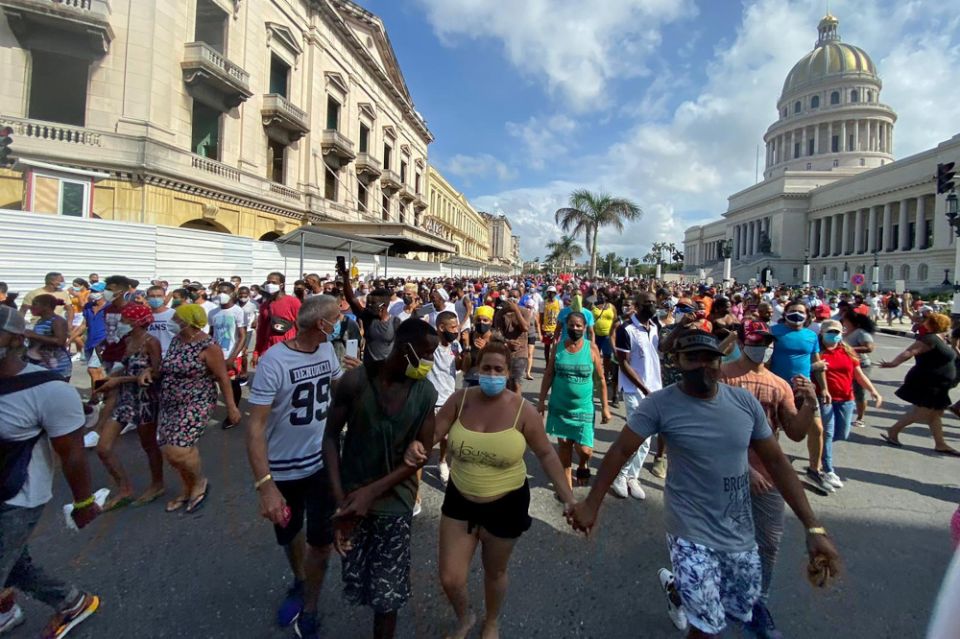 People participate in demonstrations in Havana July 11. Thousands of Cubans took to the streets across the country to protest a lack of food and medicine as the country undergoes an economic crisis aggravated by the COVID-19 pandemic and U.S. sanctions. (CNS/Reuters)

Bogotá, Colombia — The Cuban bishops' conference called on the island's government and protesters to "listen to each other" and avoid violence as the country reels from demonstrations sparked by food shortages, power outages and worsening economic conditions.

The protests which broke out July 11 were the largest in decades. They were quickly repressed by the island's communist government, which arrested dozens of people, cut access to the internet and also detained — and then released — a priest who was trying to protect young protesters from police.

In a statement published July 12, the bishops said thousands of people have taken to the streets of Cuba to protest the "deterioration of social and economic conditions" and added that while the government has "tried to take measures" to solve problems, Cuban citizens should have "the right to express their needs and hopes" in public.

The bishops said that they were worried that the protests would be ignored and that both sides would "maintain rigid positions."

"We will not reach a favorable solution through imposition, or by making a call for confrontation, but only by listening mutually to each other and looking for accords," the statement read.

The protests began in San Antonio de Los Baños and were quickly replicated in at least a dozen cities across the island.

In some towns, protesters turned over police cars and looted government-run stores that sell imported goods at high prices, and are sometimes the only places where people can find basic items such as toothpaste.

Cuban President Miguel Díaz-Canel blamed the decades-long U.S economic embargo for the protests. He said July 12 the White House was trying to "asphyxiate the island, in the hopes of creating social upheaval." Díaz-Canel also called on his supporters to take to the streets in defense of the revolutionary government, that has been in charge of the island since 1959.

U.S. Secretary of State Anthony Blinken responded to Díaz-Canel's accusations, saying that it would be a "grievous mistake" for Cuba's government to interpret the protests as the product of U.S. policy. Blinken said that the protests reflected the Cuban government's failures to meet the needs of its people.

Read this next: Religious leaders in Cuba voice support for peaceful protests

Amid the protests, Fr. Castor José Alvarez Devesa was arrested and beaten by police in Camaguey, but was released the following day after church groups posted messages about his detention.

In a Facebook video, Alvarez thanked those who had asked for his liberation. "I was trying to provide some company to the protesters, and to help avoid confrontations, but I was hit with a baseball bat" he said in the video, which showed he had a bandaged head.

"Thanks to God I am all right," Alvarez said. "But we have to continue praying for those who are still detained, so that there will be justice for them ... and so that Cubans can find the road to peace and liberty."

In 2018, Alvarez visited the Vatican to ask for the church's help in facilitating a transition to democracy in Cuba. Along with two other priests he wrote a letter to then-Cuban President Raul Castro, in which they asked for free elections and freedom of the press among other reforms.

Cuba's political structure has changed little since then, with the island still run as a one-party state.

But Cuba's economy has deteriorated during the pandemic because of a sharp decline in revenues from tourism as well as a poor harvest of sugar, one of Cuba's main exports.