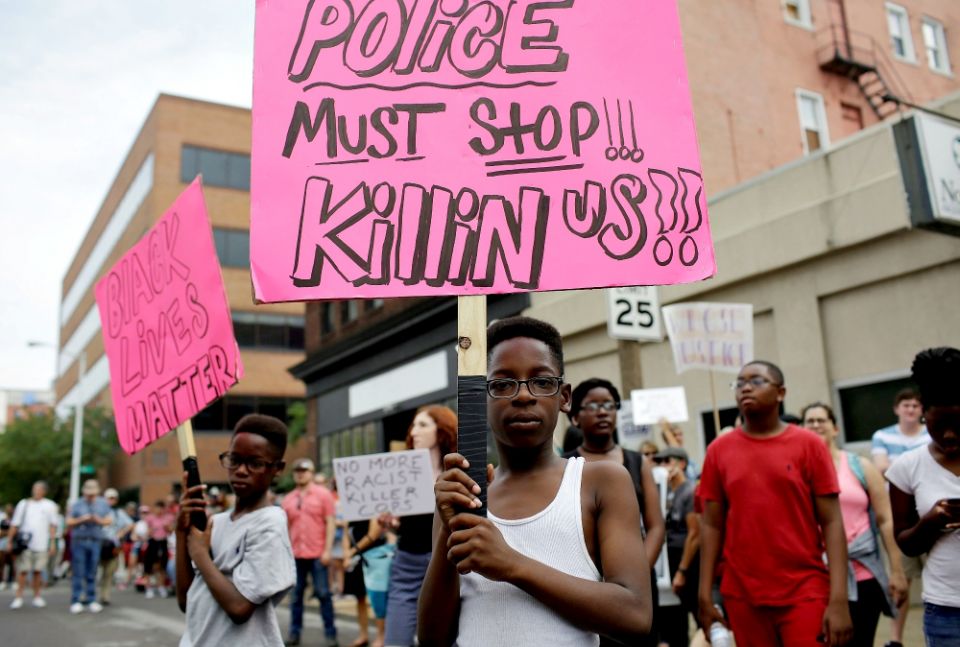 Young people hold signs during September 2017 protests after a not-guilty verdict in the murder trial of former St. Louis police officer Jason Stockley, charged with the 2011 fatal shooting of Anthony Lamar Smith, who was black. Stockley is white. (CNS/Reuters/Joshua Lott)

They took turns describing themselves, their hometowns and how race has impacted their lives.

To the last question, Christian Br. Kevin Griffith spoke about a school where he once taught in the Little Haiti section of Miami, its student body a third Latino, a third Haitian, a third Anglo. He was amazed how well the students got along with each other, despite their different backgrounds.

"Race wasn't an issue to them. It was an issue to the adults," said Griffith, provincial of the Edmund Rice Christian Brothers' North America province.

The conversations at the Redemptorist parish were part of the annual assembly of the Conference of Major Superiors of Men, organized through its Justice and Peace Office and the St. Louis Archdiocese's Peace and Justice Commission.

Rather than seeking to bring about solutions or solve specific issues, the encounter was meant as a reacquainting between young people active in their city's struggle for racial justice and religious leaders who until recently have been seen as largely absent. 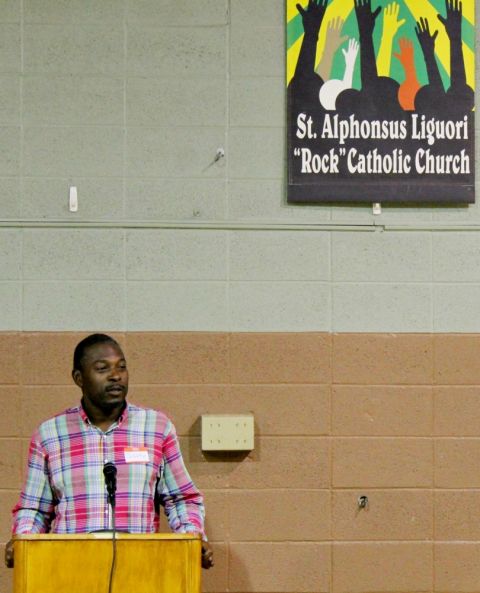 A community seeking change offering the church a second chance.

"This is very important why you all are here. This is a very transformational time here in our region," said Justin Idleburg, a community activist and board member with Forward Through Ferguson.

The discussion began by looking back at the unrest that erupted in nearby Ferguson following the death of Michael Brown on Aug. 9, 2014, and at the demonstrations that followed the not-guilty verdict last September in the Jason Stockley case, a police officer acquitted of first-degree murder in the 2011 shooting death of Anthony Lamar Smith.

Idleburg recalled the scene he saw four years ago in Ferguson after Brown's death: people everywhere, in cars, walking down the middle of the street. Many were peacefully protesting, while others rioted and looted. Police arrived armed with militarized weaponry along the streets and on rooftops. In Idleburg's view, the police placed the protection of businesses before protecting citizens.

"No one protected the people. The only people that came out to protect the people were the people and the legal observers," he said.

"Now how does that make me feel by being a person that was born, raised, educated here, and to come to find out when you call an injustice what it is, they tell you that, no, you're doing everything wrong?" Idleburg asked.

When a friend from an association of black attorneys based in Washington, D.C., asked Idleburg what St. Louis' black leadership and the church had been doing to address the city's issues, he replied, "Golf tournaments and fundraising."

"No one came to help us. And people didn't understand why people were outside hollering and screaming," he said.

The Rev. Darryl Gray, a Baptist minister, said that when he later met with protesters, they told him they didn't trust the church, "because we haven't seen you lately." They weren't angry at the church, just disappointed that it hadn't reflected the one their grandparents talked about, he said.

"Our young folk say even by being here tonight, they say we're trying to give the church another chance," Gray told those gathered in the St. Alphonsus gymnasium. "So we have an opportunity, as well as an obligation to let them know that we are the church that Christ intended us to be."

A part of the Southern Christian Leadership Conference for four decades, Gray recounted how he and other African-American clergy reached out to the St. Louis Archdiocese the day before a verdict was expected in the Stockley case with a straightforward message:

Gray remembered the archdiocese's response to the Rev. Martin Luther King's "clarion call" following Bloody Sunday (March 7, 1965) in Selma, Alabama, by sending two planeloads of priests and sisters to join in a march two days later from Selma to Montgomery, the state capital.

Gray and others see St. Louis as the "new Selma for America," the beginning of a new civil rights movement — one that, like the movement King led in 1960s, can't be successful without the involvement of the church.

Days after Brown's death, the St. Louis Archdiocese resuscitated its 1963 Human Rights Commission, now renamed the Peace and Justice Commission. That original commission was robust in the 1960s and '70s, said Marie Kenyon, the current director, but it lapsed in the 1990s under Cardinals Justin Rigali and Raymond Burke.

The commission today has focused its work around examining how issues facing the region impact families, and strengthening them to build stronger communities.

Four days after the Stockley verdict, Archbishop Robert Carlson led other St. Louis religious leaders and protesters in an interfaith prayer service in downtown Kiener Plaza. Afterward, they marched together to City Hall, where a six-minute moment of silence was held for Smith.

"We prayed with our feet," Gray said, describing the march as the moment the city's church community "woke up."

Jesuit Fr. Chris Collins, a member of the Peace and Justice Commission and special assistant to the president for mission and identity at St. Louis University, said that area Catholics "had been characterized in many of our parishes and schools as somewhat drifting away from the realities and the challenges around racism and injustice within our city and within our archdiocese."

The invitation ahead of the Stockley verdict to become more involved was humbling, he said. "We didn't deserve it, to be honest."

Earlier in the day at the Conference of Major Superiors of Men assembly, in a speech on racism within religious orders, Jesuit Fr. Joseph Brown rebuked assimilation within the church and said it must embrace difference over conformity. He pointed to the origins of the Cristo Rey Network of inner-city schools, where Jesuits in Chicago went door to door asking what families needed, rather than forcing a program onto them.

"You want interracial justice? Go places and listen and be humble enough to say 'You lead us,' " Brown said.

At the St. Alphonsus event, Idleburg challenged the Catholic Church in the city to do more, describing the surrounding neighborhood as "the land of despair, where nobody has an opportunity to thrive." 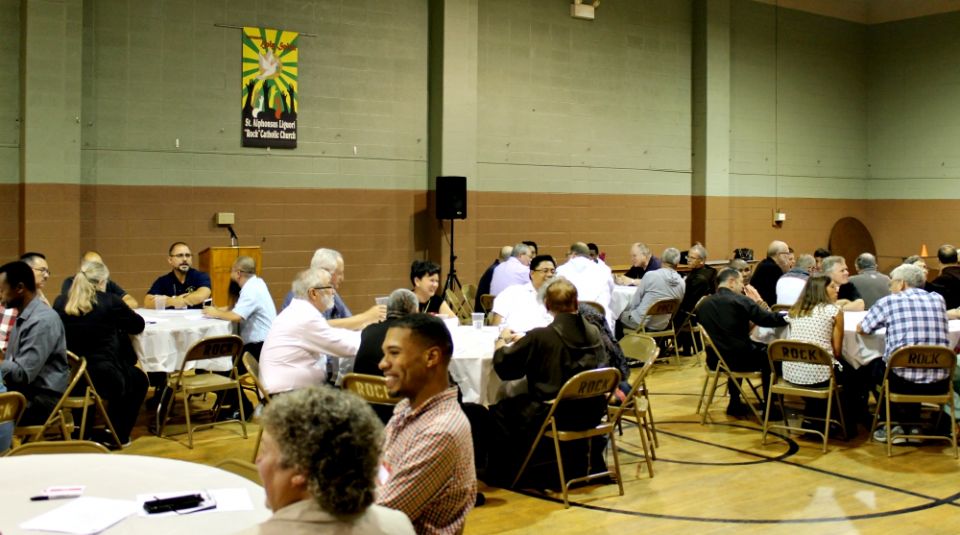 He said the Catholic parish near his home at one point offered drug recovery programs, but didn't take a more holistic approach to look at what's happening in the community. He added he'd like to see the archdiocese find a way to replicate its St. Joseph Apartments, which offer affordable living to seniors, in the city's impoverished areas.

The table discussions, while brief, allowed religious leaders to hear directly from young people in the struggle for justice: their challenges, their hopes and their expectations from the church, whether in St. Louis or elsewhere. Gray said the church has an obligation to ask two questions around issues of racism and injustice: Why is this happening? And what can we do?