Economy for the common good 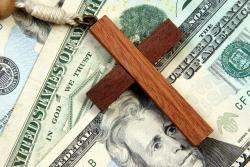 Catholic social teachings, grounded in principles aimed at providing guidance to moral decision-making, played little, if any, role in preparing the nation for the 2008 economic meltdown, according Catholic educators, some of whom are calling for an examination of the teachings’ place in Catholic educational institutions.

David O’Brien, who next fall will be professor of faith and culture at the University of Dayton, Ohio, is among the educators who feel Catholic social teachings are not being adequately taught. An emeritus professor at Holy Cross University in Worcester, Mass., O’Brien said the social teachings need to be more widely integrated into Catholic curricula. At the moment, he says, with few exceptions, they are limited to Catholic theology and religion departments

By most accounts, the economic forces that spawned the worst economic collapse since the 1930s were both personal and structural. They included greed, the failure of financial institutions to adequately consider the common good, and the failure of government to provide for some of the most vulnerable in our society.

These forces have moral considerations and Catholic social teachings speak to them. However, few Catholic voices were prominent in the months and years leading up to the economic collapse.

Catholic educators contacted by NCR generally agree that Catholic social teachings, had they been taught and disseminated more widely, would have added an important moral component to U.S. political and economic discussions.

These educators say that the teachings stress solidarity and the involvement of government, when necessary, in assuring the common good. By contrast, since the 1980s U.S. politics and economics have been fueled by laissez-faire attitudes and individualistic values that have stressed the need to minimize government controls.

Catholic social teachings date back to the late 19th century, and are contained in papal encyclicals and other episcopal documents. Over the years they have attempted to apply Catholic moral teachings to social, political and economic issues.

These teachings call upon Catholics to stress the sanctity of human life, the dignity of the person, the call to community and participation, a preferential option for the poor, the rights of workers to organize and earn a fair wage, and the care for God’s creation.

While such teachings have evolved over the decades, their economic components reached prominence in the United States in the mid-1980s when the U.S. bishops, under the leadership of Rembert Weakland, then archbishop of Milwaukee, worked to draw up a pastoral letter on economics. It was published in 1986 and called “Economic Justice for All.”

The pastoral invited Catholics to use the resources of Catholic faith “to shape a society that better protects the dignity and basic rights” of all. It offered six principles that Catholics could apply to evaluate economic matters:


Stephen Schneck, director of the Life Cycle Institute at The Catholic University of America in Washington, said recently that as the bishops deliberated the content of the pastoral, its communal language came up against the views of some prominent Catholics who felt the pastoral needed to stress free-market principles.

“When the U.S. Catholic bishops began drafting the pastoral letter,” he said, “they called on lay Catholics to join in the discussion. A group of laymen led by William E. Simon and Michael Novak took the bishops at their word. They issued a critique called ‘Liberty and Justice for All’ that praised the principles of free-market capitalism.”

It was clear, Schneck stated, that Catholics were not of a like mind on these matters. He added that Catholic social teachings in recent decades have not played well in the free-market capitalism that has dominated the nation in recent years.

Many Catholic thinkers, according to Schneck, have shown what he calls a “worrisome dependence” on free-market models that see the human person as one “primarily motivated by self-interested consumption.”

“Classical social thought,” stated Schneck in an e-mail, “contained in encyclicals such as Pope Leo XII’s Rerum Novarum [1891] and Pope Pius XI’s Quadragesimo Anno [1931] spell out such concerns.” More recently, he said, “Economic Justice for All” did the same.

Asked why Catholic social teachings have not played a greater role in shaping the moral consciousness of Catholics, he responded that Catholic university social science departments are largely staffed by researchers shaped by “the dominant economic models of their field’s discipline.”

“And they didn’t see this meltdown coming,” he said.

Catholic educators today, he said, lack a fully developed economic theory “that reflects traditional Catholic conceptions of the common good, the dignity of work, natural law and similar components of such an economic model.” He would like to see more work done developing such a theory.

Vincent Miller, associate professor in the theology department at Georgetown University in Washington, agrees with Schneck that the principles contained in Catholic social teachings have come under attack from a number of areas, intellectual and cultural.

He said that the most prominent U.S. think tanks have been allied “with the neoliberal policies that have dominated economic thought since [President Ronald] Reagan and [British Prime Minister Margaret] Thatcher.” These, in turn, have had a wide influence on society, Catholics included.

According to Miller, the advances of Catholics in U.S. society in the past half century have loosened them and the church from their strong communal moorings once anchored by their immigrant and labor sensibilities.

Catholic social teaching used to matter, he said, because there was a working class that “understood itself as such, experienced the difference that union struggles made in their lives, and, thus, appreciated and engaged papal social teaching that supported them.”

“The common good was woven into the specific interests of specific communities. Post-World War II affluence eroded many of these things,” he said. “The labor movement changed. People lived in suburbs in single family homes. Financial devices, including health, life, disability insurance, pensions, replaced truly social safety nets. Politics detached from neighborhood- and ward-level organizing and patronage. There was no longer a lived practice of the common good.”

These social changes, Miller went on, opened up the space for “neoliberal economics where everything is market-based.”

“Long before [Milton] Friedman preached his gospel we were already living in his church.”

According to Miller, these radical changes in Catholic economic perspectives were also exacerbated by neoliberal deregulation and the creation of global institutions such as the World Trade Organization. All this, he said, “separated the economy from democratic control that could yoke it to the common good.”

Asked if the economic collapse has any lessons for Catholics, Miller responded that the crisis should remind us of “the profound moral dimension of economic life.”

“Obviously a declining economy puts tremendous pressures on people’s lives that have moral implications. The abortion rate goes up, property crimes go up, domestic abuse goes up, and alcoholism goes up, and so on. But also, the inequities in our social life become more compelling as the ranks of the poor swell and the gap between those who have and those who have not becomes much wider.”

Miller thinks that that the economic crisis will affect how economics and Catholic social thought will be taught on our campuses and in our institutions. “I’d very much like to hope, too, that it might wake up the institutional church in America to reeducate Catholics in the pews about obligations of economic morality.”

Daniel K. Finn, professor of theology and Clemens Professor of Economics and the Liberal Arts at St. John’s University in Collegeville, Minn., agrees that Catholic social teachings have a lot to offer. He is not hopeful, however, that they will have the impact in Catholic higher education he would like to see.

“There is not a sufficient consensus among relevant Catholic intellectuals on these matters,” Finn said. “If and when there is, they have insufficient influence on Catholic education. So in a sense the economic issues are a subset of the wider ‘Catholic character’ issue for Catholic colleges and universities.”

Finn, like other educators interviewed by NCR, said he believes that the current economic crisis holds lessons for Catholic social teaching, but the nature of the lesson will probably depend on with whom you speak.

“Whether there’s a large long-term shift away from the confidence in ‘free’ markets that has typified public discourse in the U.S. for 30 years will probably depend on whether Obama’s efforts are successful,” he said.

Sister of Charity Marie de Paul Combo, who has steeped herself in Catholic social teachings for many years in her peace and justice work, concurs that these teachings should have a larger impact on the consciousness of Catholics. However, for that to happen, she said, they will have to make their way out of a restricted segment of the Catholic population, including some educators and justice advocates, into the pulpits of churches across the nation. She is hopeful, but not confident this will happen any time soon.

Tom Fox is NCR editor. His e-mail address is tfox@ncronline.org.

Justice | Economy for the common good