Film marks new round in battle over sugar 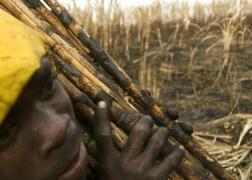 A wealthy Catholic family in the Dominican Republic is attempting to block, in a U.S. court, commercial distribution of a documentary alleging that the family oversees what amounts to modern slavery of Haitians who work in its extensive sugar operations.

The complex tale has at its center the story of a controversial Spanish-born priest, Fr. Christopher Hartley, whose path to the Dominican Republic wound through the New York archdiocese, where he was befriended by the late Cardinal John O’Connor, and whose dismissal from the Caribbean nation was ostensibly for running afoul of the local bishop over internal church matters. (See accompanying story.)

Long before the confrontation with the local bishop, however, Hartley was making waves by denouncing the practices of the owners of sugar plantations in his parish, most notably the operations owned by the Vicini family. His allegations -- among them that the Vicini family engaged in human trafficking by luring thousands of Haitians over the border to work their plantations -- were central to the documentary “The Price of Sugar.” The film has gained some renown during the past two years in film festivals and among limited audiences. (See accompanying review.)

The documentary was directed and produced by William M. Haney III and Uncommon Productions of Waltham, Mass. Haney and the firm, of which he is a partner and co-owner, are being sued for defamation by Felipe and Juan Vicini, who argue in their complaint that most of the claims made in the documentary are false and that many of the scenes and people interviewed, contrary to presentation in the documentary, were not on Vicini property or employed by the family.

Uncommon Productions has asked for a summary judgment for dismissal of the case, and a hearing date has been set for Aug. 19 in U.S. District Court in Massachusetts.

“The very notion of barring the broadcast or distribution of a documentary or indeed any other form of commentary is at odds with the First Amendment as it has been interpreted,” said noted First Amendment attorney Floyd Abrams, in a June 26 phone interview. “We don’t live in a country with prior restraint on speech. Beyond that we don’t issue prior restraints on speech ever because they are said to be libelous.”

While litigation could take considerable time if the judge does not dismiss the complaint in August, Abrams said it is unlikely that a judge would bar broadcast before a judge or jury ruled on the matter. If the complainant wins he would get an award, “but what he can’t do is stop the speech and certainly not in advance of a judicial ruling. I think the chances of suppressing the documentary are about nil.”

Whatever the ultimate outcome of the suit, the documentary has already had a significant effect as one of several major investigations of the sugar industry, most of which have characterized workers’ conditions as comparable to modern slavery. The issues swirling about “The Price of Sugar” also call attention to the strains within the church that can occur when the spotlight is turned to perceived human rights abuses and over methods employed to remedy the situations.

The Vicinis, represented by the Washington law firm Patton Boggs, depict Hartley (with the help of a Dominican Republic cardinal) as a vainglorious self-promoter out to gain celebrity on the backs of poor people. Attorney Benjamin Chew in an interview claimed Hartley knowingly made false claims about the Vicinis, lied on a sworn declaration to a federal court in Washington, D.C., and misrepresented the reasons he was asked to leave the Dominican Republic.

Haney, on the other hand, said he found Hartley, now stationed in a lonely outpost in Ethiopia near the border with Somalia, “a credible, inspiring human being.” The producer said he spent a lot of time with the priest over a two- to three-year period and “a lot of time plumbing his past. I spent hundreds of hours with him on camera, off camera, at his house at night, early in the morning, with guys threatening him, in difficult situations, in church with him. I did not see anything but for a passionate guy who cared deeply about the rights of his parishioners.”

Depictions of the sugar industry, both in the United States and in the Dominican Republic, as the last holdout of organized slavery in this hemisphere are hardly new. One landmark piece of journalism on the subject is Marie Brenner’s “In the Kingdom of Big Sugar,” which ran in Vanity Fair in February 2001. The massive article in one section details “Big Sugar’s dark history of labor controversy.” The sugar industry was investigated by congressional committees, and was the subject of earlier documentary filmmakers, notably Stephanie Black in “H-2 Worker” in 1990 “and most vividly by Alec Wilkinson in ‘Big Sugar,’ which first ran as a series of articles in The New Yorker in 1989.” Brenner also writes that the government brought charges against U.S. Sugar in the 1940s, “accusing it of violating ‘the right and privilege of ... citizens to be free from slavery.’ ”

The case ended when a judge ruled that a jury had been illegally selected and soon after, “sugar companies in Florida were given permission to import ‘guest workers’ from the Caribbean for the cutting season.”

In 1983, Brenner said, “a congressional report criticized Big Sugar’s labor practices and pointed out that ‘foreign workers ... can be summarily dismissed and sent home, never to return to the United States, for the slightest infraction or sign of organized protest over wages and working conditions.” Those workers could be sent back to their native countries without access to lawyers or legal processes.

The wages and working conditions for sugar workers in the United States are generally held to be abysmal, with workers, from St. Lucia, Jamaica, Trinidad, toiling in remote locations far from any regular government scrutiny and intimidated from seeking outside help.

Haney’s documentary, then, follows in a tradition of reporting on the state of sugar cane cutters, machete-wielding harvesters who do backbreaking and dangerous work. “The Price of Sugar” asserts that sugar workers hired by the Vicinis would not be told in advance what they would be paid and ultimately were paid a pittance in vouchers that could be spent at a company store -- all claims that the Vicinis deny in their complaint.

“The Price of Sugar” was one of at least two documentaries released in 2007 that focused on sugar cane workers in the Dominican Republic, Hartley and the Vicini family. “The Sugar Babies,” a film written, produced, directed and shot by Amy Serrano, covers much of the same ground but broadens the scope to include the sugar industry in the United States as well. Employing hidden-camera interviews, the film documents the far-flung network of Dominicans who secure workers from Haiti and the collusion between that network and Dominican immigration officials.

At one point in the film, a former resident of a batey states: “Rendered invisible are powerful owners of the sugar industry who are the ones who have sustained the trafficking of humans for many years,” adding that the owners do not want labor that is legally contracted, but rather “labor that is undocumented. They want manual labor that is submissive under the mantel of fear and the terror of deportation.”

Then a narrator asks: “Who are the Vicinis and why do they get away with it?”

While “The Sugar Babies” has been controversial and there have been attempts by U.S. sugar manufacturers to squelch individual showings, it has not yet been the object of a broad suit like that brought against “The Price of Sugar.” The Vicinis are asking the court to rule that the latter film constitutes defamation; that the defendants “shall immediately cease and desist from showing, marketing or selling” the documentary; and that the defendants shall immediately take down “The Price of Sugar” Web site.

Whatever the merits of the case against Haney and Uncommon Productions, other incidents suggest that the Dominican Republic can be a tough place for Catholic priests who call attention to what they perceive as violations of the human rights of sugar cane workers.

Hartley said the friend who invited him to look into the Dominican Republic has also lost his pastorate because of his activism.

According to “The Sugar Babies,” a Belgian priest, Fr. Paul Ruquoy, who lived and worked in the Dominican Republic for 30 years and is seen in the documentary speaking with men who help obtain Haitians for the sugar fields and explaining the mechanics of procuring workers, received death threats and was forced to leave the country.

If foreign priests see in the working and living conditions of the bateys a summons to social justice, other church authorities view the outsiders as unwelcome meddlers.

Cardinal Nicolás de Jesús López Rodríguez sent a letter to the editor of a major Dominican Republic newspaper in which he condemns foreign priests and accuses Hartley of being a self-promoter.

“When this festival of accusations began I first thought that it had only to do with that motley group of nongovernmental organizations of every type, color, nationality and sort that for many years now have been stalking around our country so as to devote themselves to harming us while abusing our hospitality, which is renowned among those persons of goodwill who visit us,” the cardinal wrote.

“Then there arrived two Catholic priests, one Belgian, the other Spanish, who believed themselves to be the redeemers of certain immigrants and who were not content with spreading every type of lie. Since, thankfully, leaving the country, to which they never should have come in the first place, they have been jumping all over Europe, with a zeal for self-promotion worthy of pity.”

There is an added twist to this very Catholic story that suggests that people trained in the same institution can come to very different conclusions about difficult issues. About two years into the filming project, said Haney, someone jogged his memory and told him that he and Felipe Vicini, one of the family members who eventually sued the filmmaker, had gone to the same exclusive Benedictine high school, Portsmouth Abbey School in Rhode Island. Haney, 47, attended because his father taught there. He believes Felipe was a year ahead of him. “I know we must have crossed paths there, but I had virtually no recollection of him.”

When he realized the connection, he wrote a letter to Vicini telling him about the project and, he said, clearly outlining all the negative material he was discovering. He said the two met over a two-day period for which Haney had flown in a film crew. They met for several hours each day, he said. He offered to take Vicini with him to the bateys they had filmed so that he could see for himself the conditions Haney had described. “The film crew sat outside of his office for two days” said Haney, but Vicini refused to be interviewed on camera.

Vicini’s lawyers said their client refused because he knew by then that the documentary contained false information that the filmmaker refused to change.

Justice | Film marks new round in battle over sugar