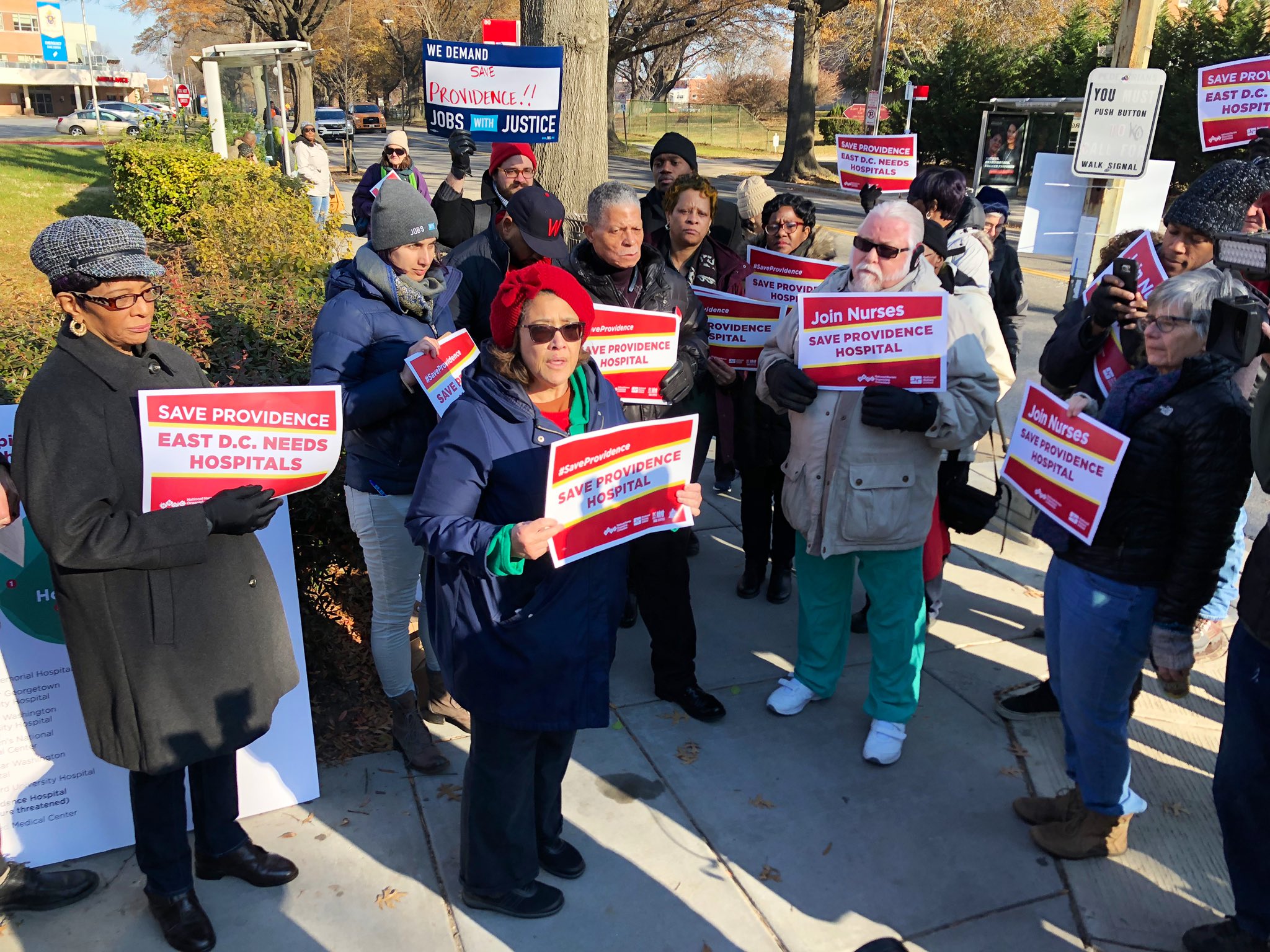 Ascension Health, the nation's largest health care company, which operates 141 hospitals and medical facilities across the country, has dramatically reduced services at Providence Hospital, which serves some of the poorest sections of Washington, D.C.

Since Dec. 14, the hospital, a subsidiary of Ascension Health, has been operating only as an emergency room and bare-bones 10-bed inpatient facility, employing about 100 nurses and a small number of other staff. It is keeping 12 nurses on call in case the operating room is needed. These, too, are slated to close April 30, 2019.

Founded by the Daughters of Charity during the Civil War and chartered by Abraham Lincoln, the hospital serves a largely poor, African-American and disabled patient base on the east side of the city. Ascension has said in public statements that the hospital, which has seen declining use, is no longer needed and that the company intends to provide for healthcare needs of the District's communities in other ways, focusing on preventative care.

But opponents of the closure are appealing to the courts and the National Labor Relations Board to keep the hospital open, arguing Providence and Ascension have a responsibility to sick patients who still need service.

The District of Columbia filed suit against the hospital and its parent company in Washington district court Dec. 14, alleging that Ascension violated Washington, D.C., law when it closed without receiving permission from the State Health Planning and Development Agency — the public authority that oversees the provision of healthcare — and without a proper plan in place to ensure care for its patients.

The city also asked a judge to issue an injunction, preventing the hospital from further diminishing services. A judge denied that request in a hearing Dec. 20, writing that he was refusing the motion for an injunction because "the plaintiffs failed to demonstrate substantial likelihood that they would prevail on the merits."

Ascension took the ruling as a victory and issued a statement Dec. 20 that listed the health services the network would continue to provide in the nation's capital.

"We are pleased with today's ruling. We remain committed to reimagining healthcare at Providence that genuinely meets the needs of the community, as we have said many times," the statement read.

Between Dec. 14 and Dec. 20, the National Catholic Reporter sent eight emails and made phone calls to Ascension communications staff asking specific questions about the timeline of the hospital closing, what services would continue to be offered, how many staff remained employed, what steps Ascension was taking to establish transfer plans for patients to receive care in other facilities, whether there are plans to sell any of the property currently occupied by the hospital and when Ascension planned to submit a revised closure plan to the State Health Planning and Development Agency, the issue at the heart of the lawsuit.

After the Dec. 20 court ruling, Ascension issued the above statement, explaining the scope of Providence health services going forward.

"This will include primary care services both on campus and at the Perry Clinic, outpatient behavioral health services, Carroll Manor, and services at the Police & Fire Clinic and Catholic University of America Student Health," the statement read. "In addition, Providence's Emergency Care Center and a downsized Inpatient Unit remains open through April 30, 2019, and available to serve the District of Columbia community, including supporting services such as lab, diagnostic imaging, respiratory care, discharge planning, and other ancillary services and support."

"This is a Catholic hospital that says in its mission it wants to treat everyone with dignity and respect. This was neither," Stephen Frum, National Nurses United.

Washington's city government was undaunted by the judge's ruling. Acknowledging it was a disappointment, the city noted it "still had a viable complaint pending in the courts," said Chief of Staff to the Deputy Mayor of Health and Human Services Jay Melder in a statement. "We will continue the fight and are pursuing all options, inside and outside the courtroom, to protect patient access to safe and reliable healthcare services at Providence Hospital."

The city alleges that Providence is moving to close the hospital, as evidence by its many layoffs and shuttered wards.

"Providence, by eliminating staffing, limiting the patients it is willing to accept and reducing, if not altogether eliminating, services including acute care is failing to comply [with D.C. laws] which require that it maintain a sufficient number of staff with the qualifications, training and skills necessary to meet patient needs," the lawsuit reads in part.

National Nurses United, the union representing 250 Providence nurses, filed a complaint with the National Labor Relations Board Dec. 12, alleging Ascension acted in bad faith in its last several negotiations with the nurses' union because executives knew they planned to close the hospital but withheld that information from staff and labor representatives. The lack of transparency influenced the outcome of labor negotiations, the union alleges.

"Generally, we try to get done what we need to do without resorting to board charges because we find them frustratingly burdensome to resolve," Stephen Frum, a labor representative for Providence nurses, explained to NCR. "But in this case, Ascension has acted so terribly with the public and with the nurses and been duplicitous. For 18 months they've known they were going to close the hospital."

National Nurses United has filed charges against Providence Hospital before the National Labor Relations Board at least five times since 2014, alleging that Providence has bargained in bad faith, refused to negotiate, created coercive work conditions and retaliated against union members.

In its complaint to the National Labor Relations Board, National Nurses United argues that in its contract negotiations with Providence in the fall of 2017 Providence should have revealed that it planned to close the hospital. The nurses' union sought then — and failed to win — a severance agreement as part of its three-year contract. National Nurses United is again in negotiations with Providence, this time attempting to win severance for the 150 nurses who were laid off when the hospital scaled back most of its services in mid-December.

Other laid off workers have severance pay, but not the nurses, Frum said. "This is a Catholic hospital that says in its mission it wants to treat everyone with dignity and respect. This was neither." 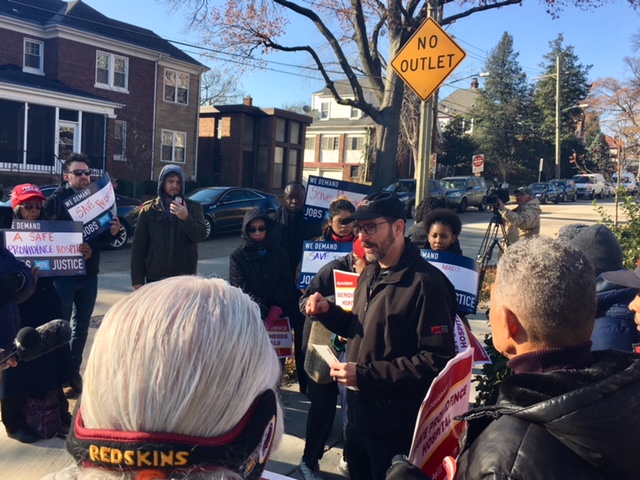 Ascension was the subject of labor complaints to the National Labor Relations Board in 2016, 2017 and 2018 when nurses, office staff, radiology employees and operating engineers at hospitals in Connecticut, Wisconsin and Michigan, in separate cases, argued Ascension refused to bargain, bargained in bad faith or used unfair labor practices. Several of those were withdrawn or dismissed. A complaint against Ascension Crittenton Hospital in Rochester, Michigan, brought by the Office and Professional Employees International is still open.

In 2016, the National Labor Relations Board issued a ruling against Ascension's St. John River District Hospital, in East China, Michigan, saying the hospital "engaged in unfair labor practices" by refusing to recognize and bargain with the International Union of Operating Engineers as the collective bargaining representative of the employees.

Ascension's communications staff did not respond to multiple phone calls and emails seeking comment on the National Labor Relations Board complaints and did not respond to eight emails over six days providing detailed questions about multiple aspects of the decision to close Providence.

In late July, Ascension Health announced it would close Providence, setting off a flurry of community, labor and political opposition. Providence has long struggled financially. Eighty percent of its patients use Medicare and Medicaid, a fact Ascension cited as among the reasons continued operation was unsustainable. Admissions at Providence were down to 5,700 in the year ending June 30, 2018, from 8,000 the year before, according to Ascension's annual report.

Ascension reported $459 million in net income during the first quarter of fiscal year 2019 — the three months that ended on Sept. 30, according to financial records. Across its network, Ascension spent $1.9 billion in fiscal year 2018 providing care to people living in poverty. The figure represents uncompensated care for uninsured people along with the gap between what Medicare and Medicaid pays and what the hospital says it actually costs to provide that care.

Still, Ascension is the largest and most profitable non-profit healthcare system in the country. Its CEO Anthony Tersigni was cited by the Wall Street Journal as the highest compensated nonprofit executive in 2014, when he made $17 million. In 2015, the most recent year for which salary information is publicly available, he earned $13 million.

The attempted hospital closure is a piece of the company's strategic plan to shift focus away from inpatient, hospital care and towards preventative, public health and outpatient treatment. The shift is being implemented across Ascension's 165,000 employee network of medical centers, hospitals, home healthcare agencies and nursing homes, in keeping with developments in the healthcare industry at large. Tersigni told employees in a March video statement that Ascension  will "create new, transformational care delivery models for the future to extend the reach of our national health ministry." But Ascension has not been specific about what exactly that transformed delivery model will entail for Washington, D.C., patients.

In a strongly worded Dec. 5 letter, the D.C. Department of Health admonished the hospital for not drawing up a sufficient shut down plan and for failing to specify to regulators how it would ensure smooth transition of care for its patients.

Providence had been in financial and management crisis for several years, cycling through three hospital presidents since 2015.

[Eileen Markey is the author of A Radical Faith: The Assassination of Sr. Maura, a biography of one of the churchwomen of El Salvador. She teaches journalism at Lehman College of the City University of New York.]