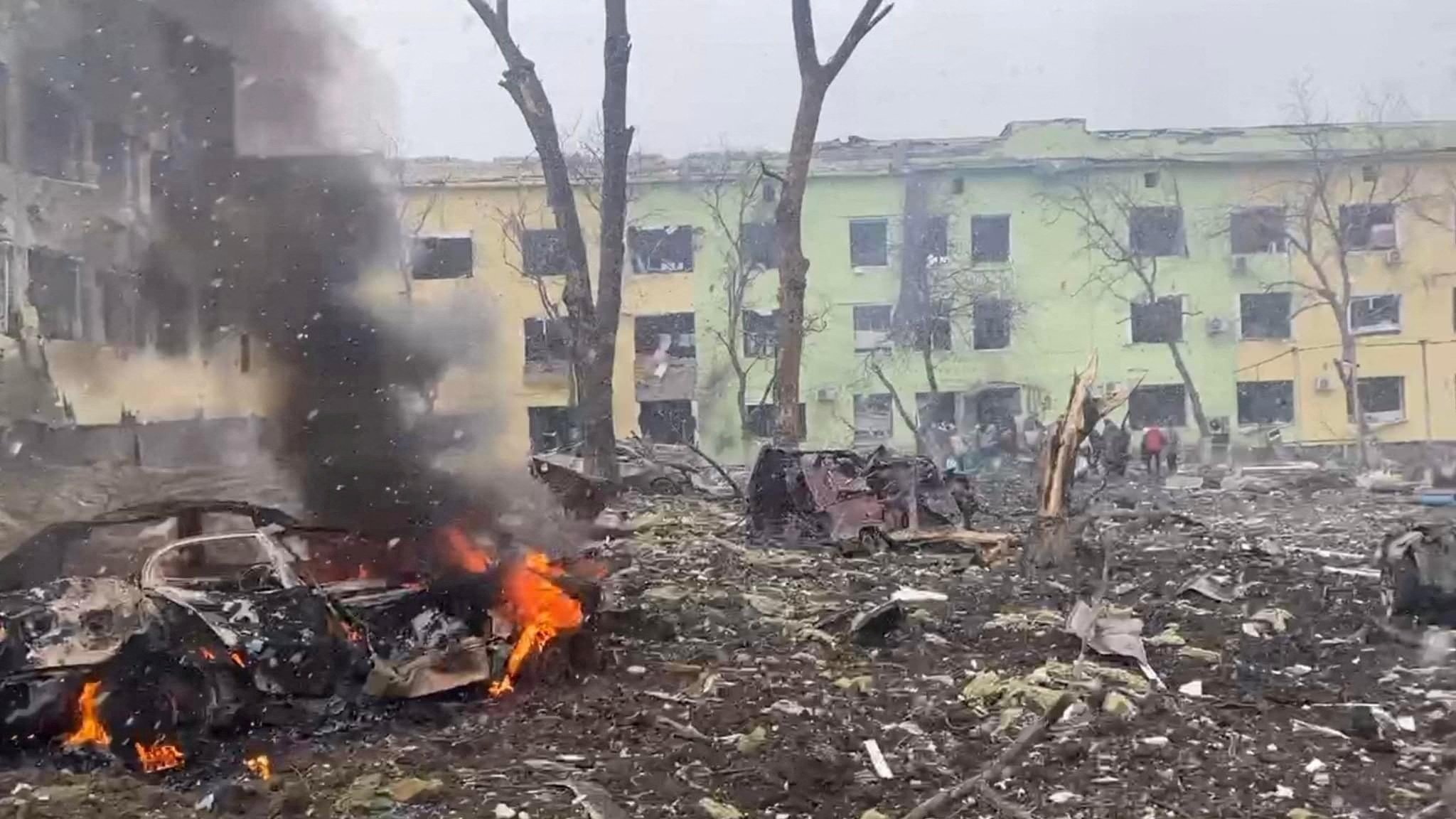 A view shows cars and a building of a hospital destroyed by an airstrike in Mariupol, Ukraine, in this handout picture released March 9, 2022. \(CNS photo/Press service of the National Police of Ukraine/handout via Reuters)

ROME — Condemning Russia's bombing of a children's and maternity hospital in Ukraine, the Vatican secretary of state insisted diplomacy and negotiations are the only ways to prevent the situation from getting much worse.

"If everyone clings to their positions, nothing can be done. The war will continue and become increasingly deadly, and with the prospect, God help us, that it could even spread. I hope not, I hope not," Cardinal Pietro Parolin, Vatican secretary of state, told reporters March 9.

The cardinal, who met with reporters after giving a speech at Rome's Pontifical University of St. Thomas Aquinas, was asked about the Russian shelling of the hospital in Mariupol. A city official told the BBC three people, including a child, were killed and at least 17 were injured.

"Bombing a hospital is unacceptable. There are no reasons, there are no motivations, to do this," Cardinal Parolin said.

Questioning Russia's action "is not only legitimate, but obligatory," he said.

The "first version" Russian President Vladimir Putin gave for invading Ukraine, the cardinal said, was that it "was a military operation aimed only at destroying military installations in Ukraine in order to guarantee the security of Russia. But, obviously, bombing a hospital for children, a pediatric hospital, has nothing to do with this purpose."

Pope Francis, after reciting the Angelus March 6, specifically rejected Putin's claim, saying, "It is not merely a 'military operation,' but a war, which sows death, destruction and misery."

The two spoke for more than 30 minutes, he said, and he pleaded with Lavrov, including on behalf of Pope Francis, to protect civilians and to guarantee the opening of humanitarian corridors to allow civilians to flee and to permit the delivery of humanitarian aid.

"It's not like he gave me any guarantees," Cardinal Parolin said.

Cardinal Parolin also was asked about comments by Russian Orthodox Patriarch Kirill of Moscow in support of Putin's war and, seemingly, his view that the common roots of Russian and Ukrainian faith and culture mean that Ukraine should remain always under Russia's influence. The patriarch blamed the West for driving a wedge between Russia and Ukraine, including by promoting "gay parades" and other attacks on traditional moral values.

The Italian news agency ANSA said Cardinal Parolin responded, "Kirill's words do not favor and do not promote an understanding, on the contrary, they risk igniting tempers even more and going toward an escalation and not resolving the crisis peacefully."