Dear Parkland students: This land is your land 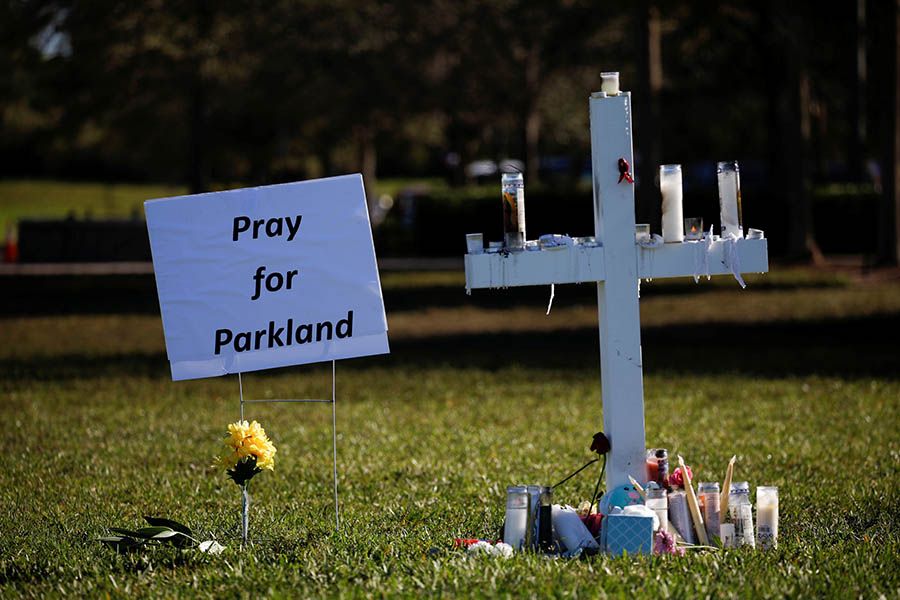 Flowers and candles, including one with an image of Our Lady of Guadalupe, adorn a cross in a Parkland, Fla., park Feb. 16. The display was put up to commemorate the victims of the Feb. 14 shooting at nearby Marjory Stoneman Douglas High School that left at least 17 people dead. (CNS/Carlos Garcia Rawlins, Reuters)

You're right, of course. It has to stop.

Allow me to suggest that the National Rifle Association's millions of dollars caused the deaths of your classmates and teachers.

While no one knows how many folks belong to the NRA, just about anyone can find the list of U.S. members of Congress, or of state and local lawmakers who have taken, now take, and probably will take NRA money. The NRA owns a lot of legislative votes.

I appreciate your efforts in organizing the March 24 national demonstrations. I think you should consider as well doing all you can to make sure every voter knows who is on the take from the NRA. I do not particularly care how much they got or get. A single dollar will sway my vote against that candidate.

The NRA came into existence just after the Civil War, in 1871. The North, you will recall, had won in that disgraceful expenditure of lives, but did so without the sort of sharpshooters who populated the South’s Confederate ranks. So, two Union officers, Col. William Church and Gen. George Wingate, thought would be it a good idea set up an organization, get some open land, and do some rifle training. You know, just in case they needed to raise a militia again against an enemy, foreign or domestic.

Church and Wingate found a place out in Queens, New York, called Creed Farm, where their newborn NRA could train members of the New York National Guard and others. Soon, however, the neighbors had had enough, and the NRA packed up and moved to Sea Girt, New Jersey.

Now it’s all over the country. And, you know what they do. Sure, they have shooting matches and they do firearm training. But they spend an awful lot of money tracking gun laws, with a goal of changing those laws to loosen restrictions. Their marketing strategy includes a “he man” approach coupled with a “she must be able to defend herself” message.

Now, no one knows for sure how many folks belong to the NRA (one is too many, if you ask me) but it certainly seems to raise a lot of money. Some say they have $350 million in the bank.

Not only that, the NRA today is an all-purpose family care agency. You can get a lifetime membership for $1,500 (easy payment plans available). You can buy NRA life, health, accident, home and auto insurance. You can insure your weaponry against loss, damage, flood, fire, and theft. You can get an NRA personal loan, and join the NRA Wine Club. You can get discounts on hearing aids, car rentals and prescription drugs. They even have custom printed bank checks with pistols in the background.

Of course, the branch of the NRA you want to — please excuse the word — target is the NRA Institute for Legislative Action. That’s where the gun lobby lives. They are the folks who have distorted the Second Amendment to the Constitution to make it sound as if everyone has a right to have an AR-15 under the bed.

By the way, the NRA says "AR" stands for "America's Rifle," not, as you sadly know too well, "assault rifle."

The NRA lobby has been so successful that only eight U.S. states, New York City, and Puerto Rico do as much as they can to limit the purchase, sale, and possession of firearms. Apparently, the rest of the country thinks you need to carry a concealed weapon, maybe even an AR-15, around with you in case you run into a mad elk in the parking lot or an alligator in the elevator.

You know how crazy that is.

Please remember one thing: the NRA began at Creed's Moor. That place is now called  Creedmoor, once the site of one of the U.S.'s largest mental hospitals. It is where songwriter Woodie Guthrie died.

The whole thing is crazy and you know it's crazy. It is up to you to stop the madness. As Woodie Guthrie wrote, this land is your land.

[Phyllis Zagano is senior research associate-in-residence at Hofstra University in Hempstead, N.Y. Her books include Women Deacons: Past, Present, Future and In the Image of Christ: Essays on Being Catholic and Female.]

Column | Dear Parkland students: This land is your land

We need to find common ground on gun legislation

On serving both God and guns, and banning someone from the Eucharist