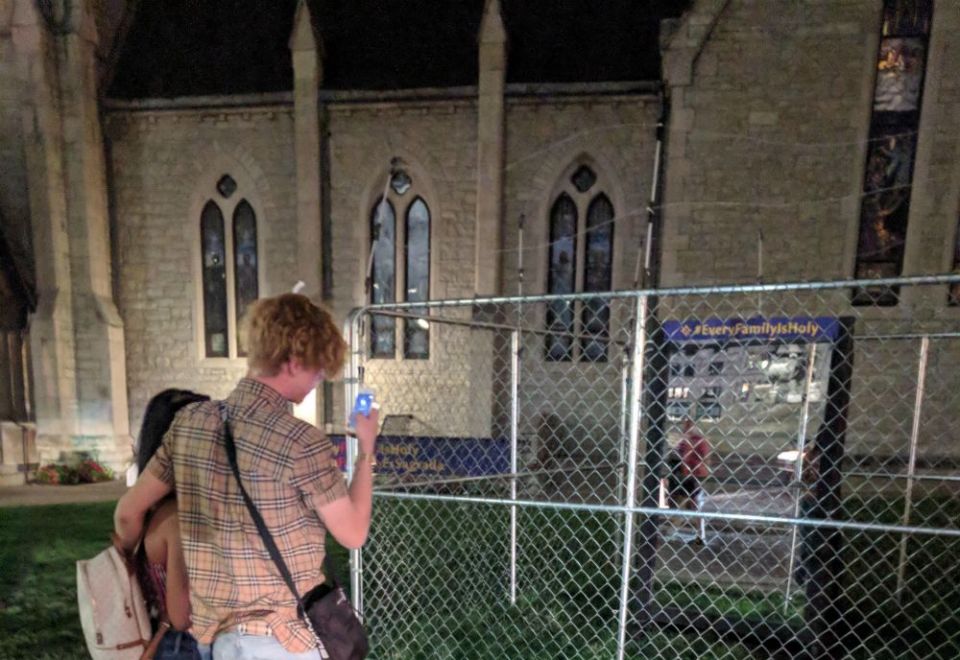 INDIANAPOLIS — An Episcopal church that made headlines when it protested U.S. immigration policies by decorating its lawn with fenced-in statues of the Holy Family has left the cage standing but replaced Mary, Joseph and Jesus with a mirror labeled #EveryFamilyIsHoly, CNN reported July 27.

The Rev. Stephen Carlsen, dean and rector of Christ Church Cathedral, said the group of Episcopal priests that put up the display wanted to help visitors imagine how it would feel to be in the place of detained and separated migrant families.

DES MOINES, Iowa — One year after two Des Moines Catholic Workers, Jessica Reznicek and Ruby Montoya, announced July 24, 2017, that they had intentionally caused millions of dollars of damage to the Dakota Access Pipeline, federal prosecutors have filed no charges against them, the Des Moines Register noted July 23.

The two women were arrested, but soon released, for vandalizing an Iowa Utilities Board sign right after they made their announcement, and their Catholic Worker house was raided by FBI agents in search of evidence against them Aug. 11, 2017. Both have gone into hiding.

Des Moines Catholic Worker Frank Cordaro and anti-pipeline activist Ed Fallon theorized that no charges have been filed because the energy company doesn't want a trial, while Chad Carter, vice president of Operating Engineers, Local 234, the union which represents some of the pipeline workers, suggested authorities may lack evidence or suspect the women were taking credit for acts they didn't commit.

SYRACUSE, NY — A national Catholic Worker gathering held in Syracuse, New York, to celebrate the 85th anniversary of the founding of the movement ended in an anti-drone protest at Hancock Field Air National Guard base, during which five protesters were arrested, July 29.

A video of the event shows protesters holding signs with messages including "Ground the Drones," "Let Agapé, the command of Jesus disarm us all," "Every Drone Flown A Theft From Those Who Hunger," "Weaponized Drones Separate Families Forever," and "There is No Mercy as the Drone Falls."

Other signs called on drone operators to refuse orders to strike or told the Catholic bishops that all U.S. wars are unjust. The signs also highlighted protesters' home locations, including Fresno, California; Rochester, New York; Chicago; Las Vegas and the state of Missouri.

OAKLAND, Calif. — The Sierra Club, the nation's largest grassroots environmental group, announced that it agreed this spring to affiliate with the International Campaign to Abolish Nuclear Weapons (ICAN). The decision comes after the organization's board of directors called for a ban on nuclear weapons during November 2017.

ICAN, which includes faith-based activists such as Dominican Srs. Carol Gilbert and Ardeth Platte, won the 2017 Nobel Peace Prize for promoting the United Nations' Treaty on the Prohibition of Nuclear Weapons.

The theme of the walk is "No More War — A World Without Nuclear Weapons" and will join nearly a week of events sponsored by the Ground Zero Center for Nonviolent Action in commemoration of the anniversary of the bombings of Hiroshima and Nagasaki.

Similar peace walks have been happening over the past 14 years. Sponsors of this year's walk include the Nipponzan Myohoji Buddhist Order, Eugene and Tacoma Catholic Workers, Ground Zero Center for Nonviolent Action, Lake Forest Park for Peace, American Indian Organization for Change, Veterans for Peace, and Foot Prints for Peace.

Walkers plan to travel 11-13 miles each day and invite others along the way to join the walk for shorter periods or to speak at evening potluck dinners.