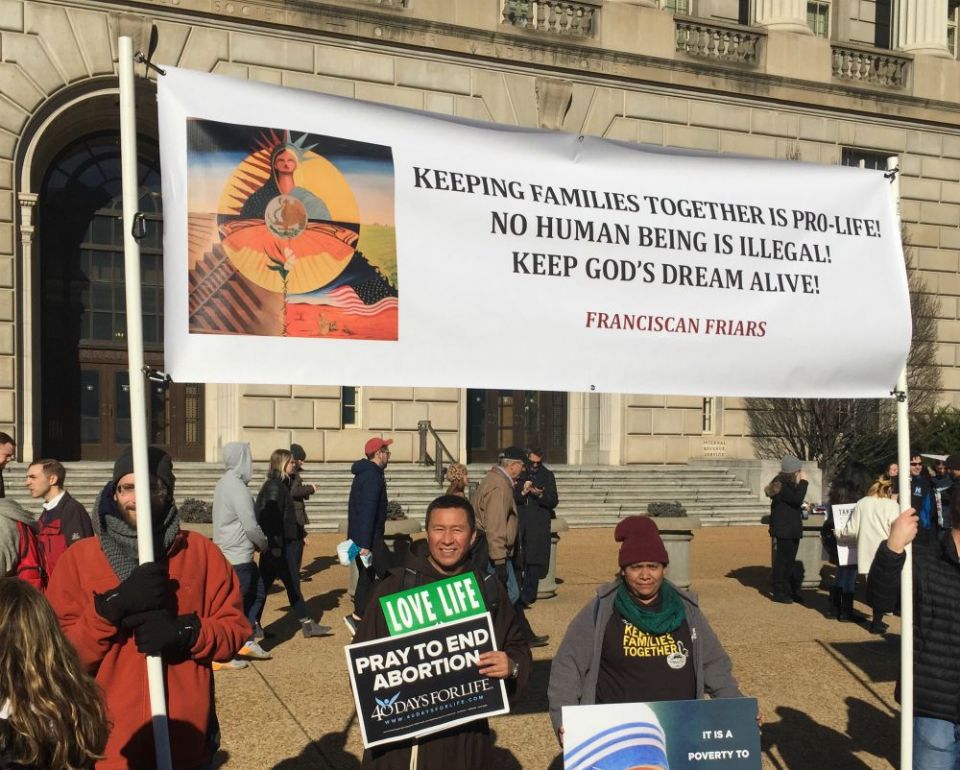 WASHINGTON — A group of local Franciscan friars brought attention to immigration as a pro-life issue at the March for Life in Washington Jan. 19.

The friars held large banners that read "Keeping Families together is pro-life. No human being is illegal. Keep God’s Dream Alive," and "Choose Life! Support a Consistent Ethic of Life" followed by a crossed-out list including "abortion, destruction of earth’s ecosystems, injustice, nuclear weapons, pandering to fear, racism, social inequality [and] torture."

According to an email from event organizer Franciscan Fr. Jacek Orzechowski, the group stood on the side of Constitution Avenue for about an hour during the march, receiving many positive comments and requests to take photos with the banners, especially from Latinos.

"Being indifferent or turning our back on the DREAMers, refugees, TPS recipients, and other immigrants pleading for justice is antithetical to the culture of Life and to the integrity of our Pro-Life Movement," Orzechowski said in a reflection emailed to NCR.

"Silence or merely symbolic gesture of concern in lieu of justice is incompatible with the Church’s commitment to upholding the dignity of human life, be they the unborn or an immigrant family from Central America, Haiti or Africa."

DETROIT — Central United Methodist Church is offering sanctuary to an Albanian immigrant, Ded Rranxburgaj, and his family after he was ordered deported despite his claim that he is the sole caretaker of his wheelchair-bound wife, Fox News reported Jan. 18.

Rranxburgaj and his wife came to the U.S. 17 years ago and had previously received temporary permission to stay due to his wife's condition. He was originally ordered removed in 2006, and his appeal was denied in 2009. The couple have a son who qualified for the DACA program and another who is a U.S. citizen.

Meanwhile, according to a Jan. 18 report from the Texas Observer, Hilda Ramirez and her son Ivan, 11, immigrants from Guatemala, reentered sanctuary in a North Austin church after their one-year stay from deportation expired and was not renewed. They had spent eight months in the church before being granted the stay in October 2016.

Mother and son were denied asylum after they entered the US in 2014, fleeing family violence.

Greensboro, North Carolina-based WFMY News reported Jan. 20 that Oscar Canales, a business owner and father of four from El Salvador, recently entered sanctuary in the Congregational United Church of Christ in Greensboro after he was ordered deported on Jan. 18. Canales came to the U.S. in 2005 with a work permit.

DULUTH, MINN. — Hildegard House Catholic Worker in Duluth, Minnesota, is asking "any sacred, blessed, holy item from any spiritual tradition (prayer ties, rosaries, holy water, feathers, scapulars, medals, etc.) to be sent to them as soon as possible" according to an email request.

The Catholic Workers have been involved in resistance to the Enbridge pipeline, including working closely with a Native American group, the Ojibwe, whose land the proposed pipeline route would cross. They plan to use the sacred items in a "prayerful act of resistance to the pipeline" and hope to receive them within the next month.

One bled out, the other bled in