no ban no wall c.jpg 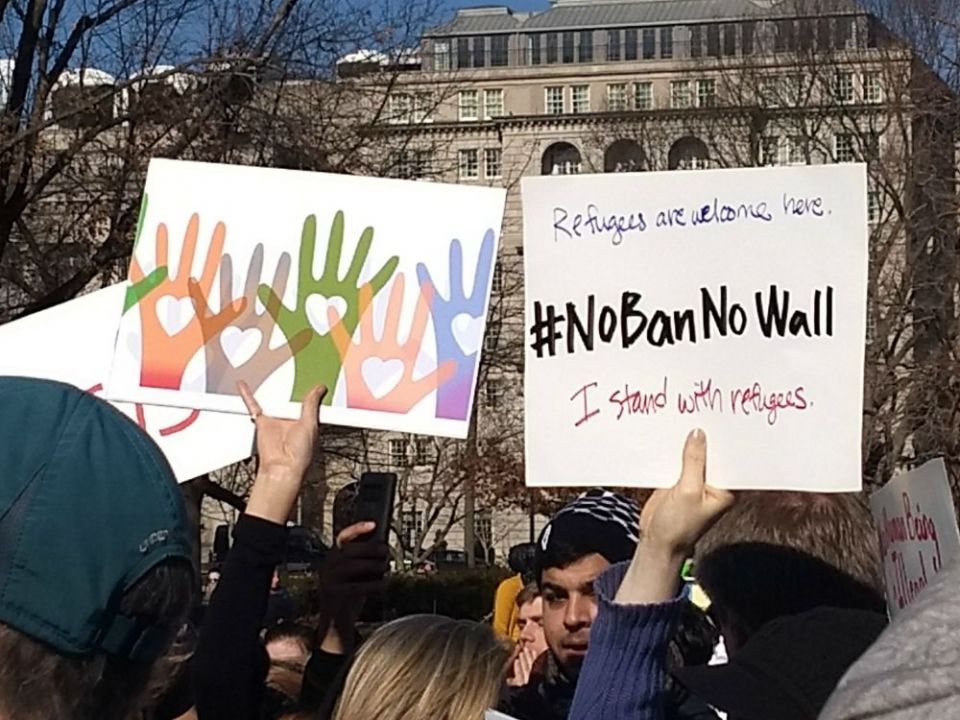 The Jan. 27 rally was in protest of the original ban and its subsequent updates, which a Jan. 23 press release from the Franciscan Action Network called discriminatory and harmful to the refugee resettlement program. The group estimates that although the 45,000-refugee cap is already historically low, only about 15,000 refugees will arrive this year due to the travel ban and other policy changes.

During the protest, allies formed a human chain around Muslims to defend them during midday prayer and also marched to the Trump hotel and Customs and Border Patrol headquarters. The event featured speakers including Afkab Hussein, a Somali refugee separated from his family because of the travel bans; Naeem Baig, a Muslim spoken word artist; and the Rev. Reuben Eckels of Church World Service.

NEW YORK — The Center for Migration Studies of New York, a member of the Scalabrini International Migration Network, recently released a report arguing that young migrants who would be eligible for legal status through the Dream Act are poised to increase their contributions to their communities, especially if they receive a pathway to citizenship.

The study, released Jan. 22, is co-authored by Donald Kerwi, the center's executive director, and Robert Warren, a senior fellow at the center.

It reports that 2.2 million residents would be Dream Act-eligible. Those individuals have lived in the U.S. for an average of 14 years; 65 percent of them ages 16 and over participate in the work force, and 88 percent speak English exclusively, very well, or well. About 50,700 temporary protected status recipients from El Salvador, Haiti and Honduras would be Dream Act-eligible.

The U.S. has already made a $150 billion investment in educating Dreamers; if allowed to stay and become citizens, they could repay that investment through increases in "education levels, employment rates, self-employment numbers, US family members, and English language proficiency," the report concludes.

During the press conference, Joe Morrison, one of the lawyers working on the case, said the workers in question entered the U.S. under the H2A visa program, which allows foreign workers to enter the U.S. temporarily if a company claims it cannot find local workers.

Morrison said H2A recipients are "more vulnerable and have fewer legal rights in this country than undocumented workers" because their visas tie them to specific employers and they are specifically excluded from the Agricultural Worker Protection Act.

Highland Park, NJ — Harry Pangemanan sought sanctuary in The Reformed Church of Highland Park Jan. 25, becoming the third Indonesian immigrant who is living in the church to avoid deportation, according to a Jan. 27 report from nj.com.

Pangemanan is a Christian who fled religious persecution in Indonesia in 1993. After overstaying his visa, he self-reported to Immigration and Customs Enforcement after 9/11 and had previously received stays of removal, although he was arrested and detained for about two months in 2009. The church helped him obtain another stay of removal.