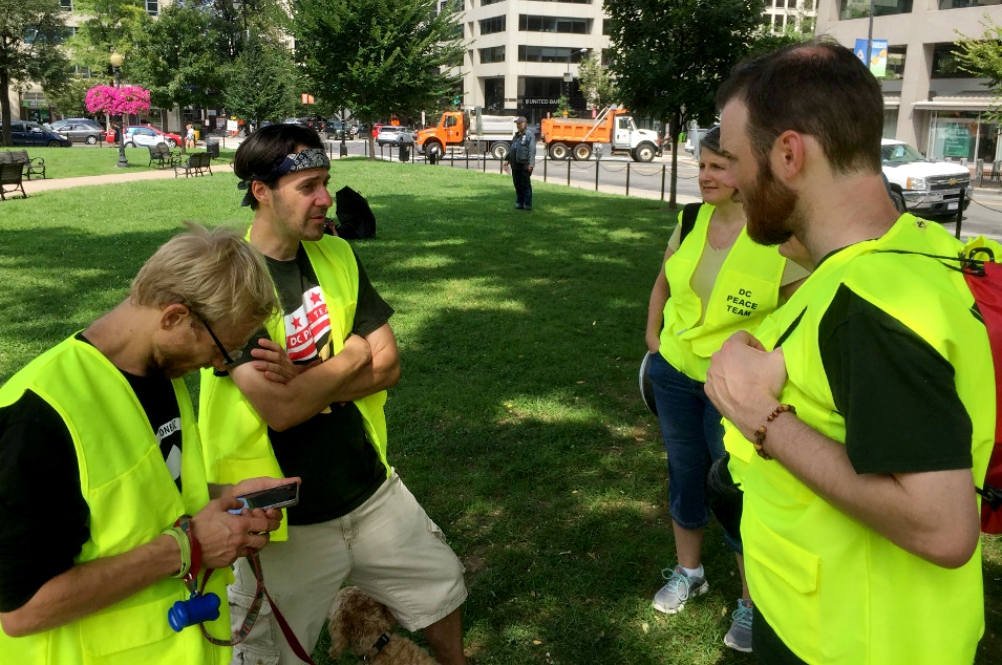 WASHINGTON — DC Peace Team deployed a majority-Christian unit of 24 trained unarmed protectors, including eight Catholics, to protect a group of approximately 800 counterprotesters during a "Unite the Right" rally Aug. 12 in Washington, D.C.

"Recognizing the dignity of every person, we will seek to interrupt dehumanization, prevent violence, and when possible engage in constructive dialogue," the group stated in an Aug. 10 press release.

Eli McCarthy, a DC Peace Team coordinator and director of justice and peace for the Conference of Major Superiors of Men, told NCR in an email after the event that the protectors were able to defuse several tense situations, including some that involved people throwing objects, preventing them from escalating into more serious violence.

Religious leaders and faith-based groups were also among counterprotesters at the event, which was attended by fewer than 30 white supremacists.

"Our goal is not to engage in direct action, yet we also do not offer ourselves as 'neutral' observers. We stand in solidarity with the counter-protesters as they seek to stand up for justice for all," the Rev. James Ross II, minister of justice formation at First Congregational United Church of Christ, said in the press release.

Patrick Carolan, executive director of Franciscan Action Network, referred to St. Francis of Assisi's meeting with the sultan of Egypt during the fifth Crusades as an example of cultivating peace.

"We are proud to stand up and lend our support to those people and organizations who work to do the same," Carolan said in the press release.

OMAHA, NEBRASKA — In the wake of Pope Francis' change to the catechism to say that the death penalty is "inadmissible," and 10 days before the state of Nebraska was scheduled to hold its first execution in 21 years, about 40 anti-death-penalty protesters congregated outside of Gov. Pete Ricketts' church, the Omaha World Herald reported Aug. 6.

The protesters who gathered outside St. Margaret Mary Catholic Church in Omaha Aug. 5 carried a large banner that read "Who Would Jesus Kill?", along with other signs, such as "Who Would St. Ignatius Murder?", "Not in My Name," "No Execution!", and one with a photo of Pope Francis and the words "I SAID NO!"

Nebraska's three Catholic bishops have spoken against the execution, but Ricketts has been a major advocate for the death penalty, helping fund the successful campaign to reinstate it after lawmakers overrode his veto to outlaw it in 2015.

Cordaro noted a statement from Pates during the Obama administration that said its armed drone program "was not just, was not moral," in Cordaro's words, but he claimed Pates never brought the message of the statement home. "Please, Bishop, for God's sake, speak out."

WASHINGTON — About 30 people from the faith-based community of the Washington, D.C., area gathered Aug. 9, the anniversary of the bombing of Nagasaki, for a Prayer Service of Repentance to call for the abolition of nuclear weapons.

The vigil included an opening address by Art Laffin, a "litany of repentance," the reading of the Hiroshima Peace Declaration, and an "apology petition," signed by more than 700 people, that expressed repentance for the bombings and continued nuclear proliferation.

According to an email from Laffin, community members also offered prayers and, after each prayer, placed a rose on a photo of an atomic bomb victim displayed on the street to create a "makeshift shrine."

The Dorothy Day Catholic Worker in Washington organized the event, which was also sponsored by the local, national and international Pax Christi; Columban Center for Advocacy and Outreach; Assisi Community; Jonah House; Maryknoll Office for Global Concerns; the Sisters of Mercy Institute Justice Team; and the Franciscan Action Network. 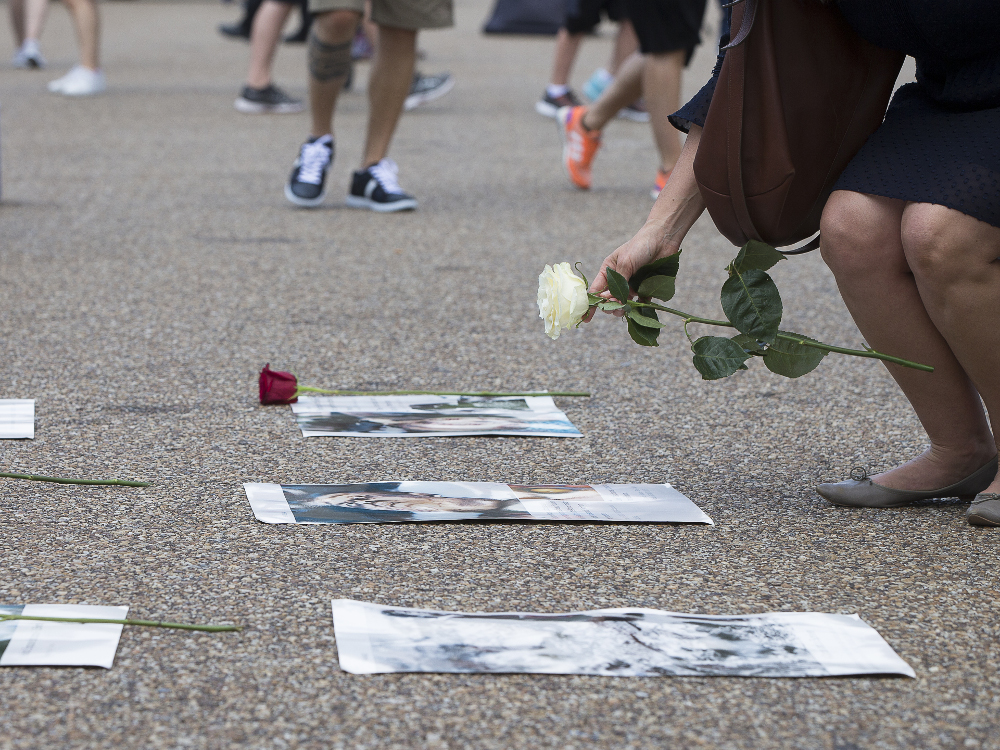 A woman places a rose on the photo of an atomic bomb victim in Washington during a Catholic prayer service of repentance near the White House Aug. 9 for the use of nuclear weapons on Japan during World War II. (CNS/Tyler Orsburn)

The same group also held a similar Prayer Service of Repentance and a nonviolent witness outside the Pentagon the morning of Aug. 6, the anniversary of the bombing of Hiroshima.

During that event, Kathy Boylan left the designated protest area and walked toward the Pentagon entrance with a banner reading: " 'Hiroshima and Nagasaki: A Butchery of Untold Magnitude' —Pope Paul VI." She was arrested and charged with interfering with agency functions, and failure to obey a lawful order.

BÜCHEL, GERMANY — Two U.S. activists, Redwood City Catholic Worker Susan Crane and Nukewatch member John LaForge, were detained Aug. 6 after they entered the Büchel Air Base, where 20 U.S. nuclear weapons are reported to be deployed. Crane and LaForge wore signs reading "Weapons Inspector" and searched the base with a radiation monitor.

"We hoped to confirm that the US has removed its nuclear bombs in compliance with the Nuclear Nonproliferation Treaty, but our investigation was halted by the military," Crane said in a media advisory sent out by La Forge Aug. 7.