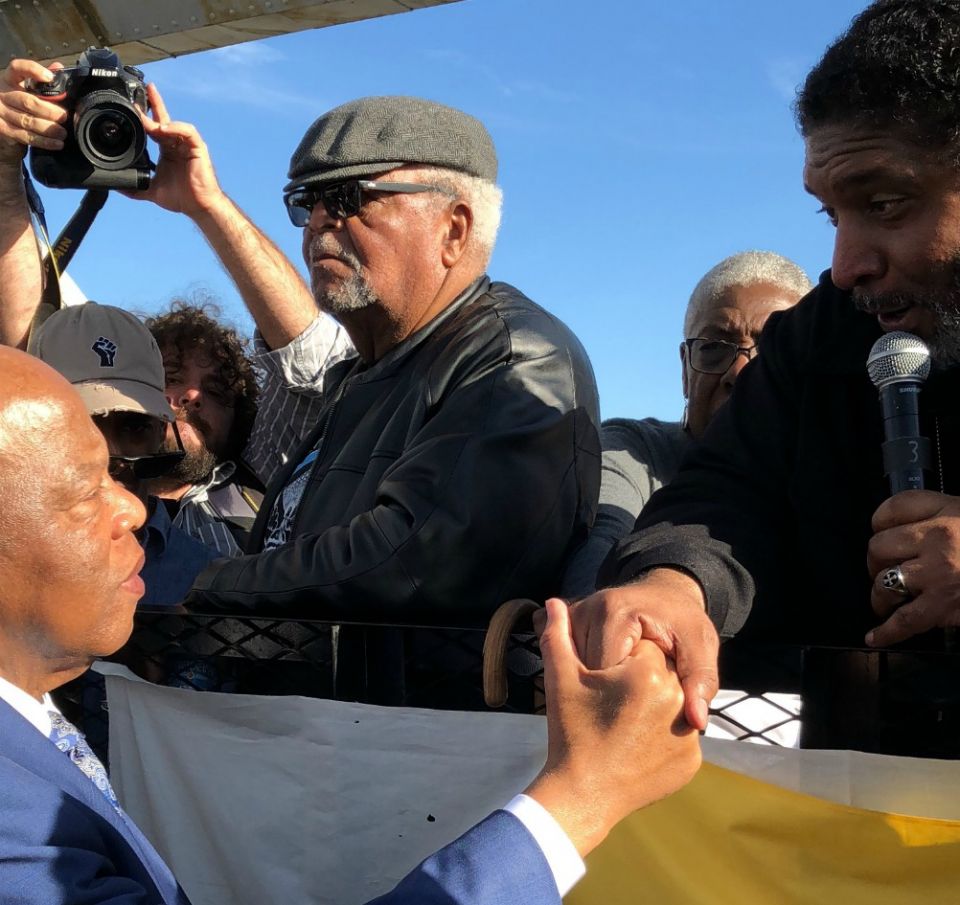 On the Edmund Pettus Bridge March 4, Rev. William Barber II, co-chair of the Poor People's Campaign, right, promises Rep. John Lewis (D-Georgia), who had his skull fractured while leading the original "Bloody Sunday" march across the bridge, that the campaign will not dishonor his and others' blood. Lewis pledged to continue the fight to restore the Voting Rights Act and stand against voter suppression. (Courtesy of Poor People's Campaign)

SELMA, Ala. — The Revs. William Barber II and Liz Theoharis visited Selma and Fort Deposit, Alabama, March 2-4 to highlight the links between poverty and voter suppression in their roles as co-chairs of the Poor People's Campaign: A National Call for Moral Revival.

According to a March 1 press release, the visit was scheduled to include a tour of Fort Deposit and a meeting with local residents who are dealing with inadequate wastewater treatment; a tour of "The Alley," one of Selma's poorest communities; and a panel discussion on how voter suppression is fueling poverty.

In an update emailed to NCR March 5, campaign organizers said they visited a Lowndes County resident whose grandchildren play near open sewage in his backyard and a woman whose 9-year-old daughter uses a breathing machine (CPAP) because of a mold infestation in their home. They reported that residents of "The Alley" want to be heard by those in power.

On March 4, a few days ahead of the 53rd anniversary of "Bloody Sunday," campaign leaders headed a rally calling on lawmakers to restore the Voting Rights Act, pass a bill requiring a living wage, and preserve safety net programs before leading a march across the Edmund Pettus Bridge in Selma.

During the march, Barber promised Rep. John Lewis (D-Georgia), who had had his skull fractured while leading the original "Bloody Sunday" march across the bridge, that the campaign will not dishonor his and others' blood. Lewis pledged to continue the fight to restore the Voting Rights Act and stand against voter suppression.

BIRMINGHAM, England — A Catholic priest from Birmingham, England, Fr. Martin Newell, could face prison time after refusing to pay a 515-pound fine (over $700) for damaging a sign at Defence and Security Equipment International  (DSEI) Arms Fair in London around nine years ago, according to a report from Birmingham Live.

Newell and St. Joseph of Peace Sr. Katrina Alton poured red paint on the sign together to represent the blood of victims of the arms trade, which Newell says promotes war and conflict. Both Newell and Alton are members of the Catholic Worker movement.

While Alton was also convicted and paid her fine, Newell was given 28 days from his last court date on Feb. 28 to pay the fine or be imprisoned. He has served short sentences in the past for refusing to pay fines and also served six months in prison in 2000 for causing 30,000 pounds' worth of damage (over $41,000) by hammering on a nuclear warhead convey vehicle.

UNITED STATES — Episcopalian youth are leading their church in anti-gun violence protests and marches, according to a March 1 article from Episcopal News Service.

In the Central Pennsylvania Diocese, a youth group will be joined by Bishop Audrey Scanlan in a march at the capitol building in Harrisburg March 24. Members of the clergy are invited to attend wearing cassocks.

The Indianapolis Diocese youth steering committee had planned to discuss feelings about the Parkland shooting and share opportunities for action during its March 3-4 youth retreat, and some members will attend the March for Our Lives in Washington or local events. Church leaders in Washington are trying to arrange lodging with local church members for out-of-town youth who would like to attend the March 24 rally.

WASHINGTON — The Catholic Mobilizing Network launched its new Women Religious Death Penalty Advocacy Council March 2 with a webinar on ending the death penalty and the first of its monthly "Faith and Action First Fridays."

A Feb. 2 email, sent on the World Day for Consecrated Life, invited religious sisters to join the new effort and participate in both initiatives. Also March 2, a new "First Friday" webpage was added so people can find guidance on praying, advocating and taking action on various anti- death penalty campaigns.