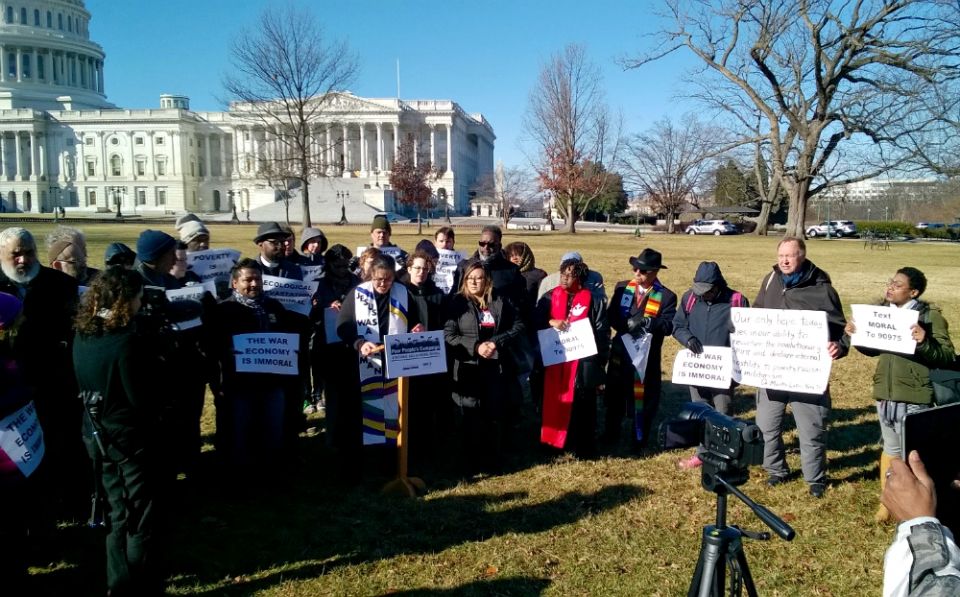 Faith leaders and activists gather in Washington for a Feb. 5 press conference announcing the "40 Days of Moral Action" as part of the Poor People's Campaign. (Courtesy of Dorothy Day Catholic Worker)

According to a Feb. 7 report from the Los Angeles Times, the lawsuit alleges the cities of Anaheim, Costa Mesa and Orange pushed homeless people out to the camp along a bike trail near the Santa Ana River, and are now trying to force them back to the cities with no alternative housing plan.

A hearing is scheduled Feb. 13. Until then, police may still be present in the river trail area and can make arrests for probation and parole violations and other illegal activity.

SALT LAKE CITY — An immigrant mother of two from Honduras who sought sanctuary in Salt Lake City's First Unitarian Church said Feb. 9 that she made the decision to stay in order to protect her children from dangerous conditions in her home country, according to a Feb. 10 report by Deseret News.

Deseret News had reported Jan. 31 that the woman, Vicky Chavez, was on her way to the airport to be deported when she decided to seek sanctuary with her 6-year-old and 4-month-old daughters instead. Chavez had entered the U.S. in 2014, fleeing violence, and was denied asylum.

WASHINGTON — Faith leaders and other activists in Washington, D.C., and more than two dozen states launched "40 Days of Moral Action" as part of the "Poor People's Campaign: A National Call for Moral Revival" Feb. 5, according to a report from Common Dreams published the same day.

The campaign is co-chaired by the Rev. William Barber and the Rev. Liz Theoharis and aims to continue Martin Luther King Jr.'s original Poor People's Campaign from the late 1960s.

According to the campaign's website, it is "uniting tens of thousands of people across the country to challenge the evils of systemic racism, poverty, the war economy, ecological devastation and the nation's distorted morality," in order to "transform the political, economic and moral structures of our country."

As major cities crack down on panhandling, people of faith wrestle with their consciences