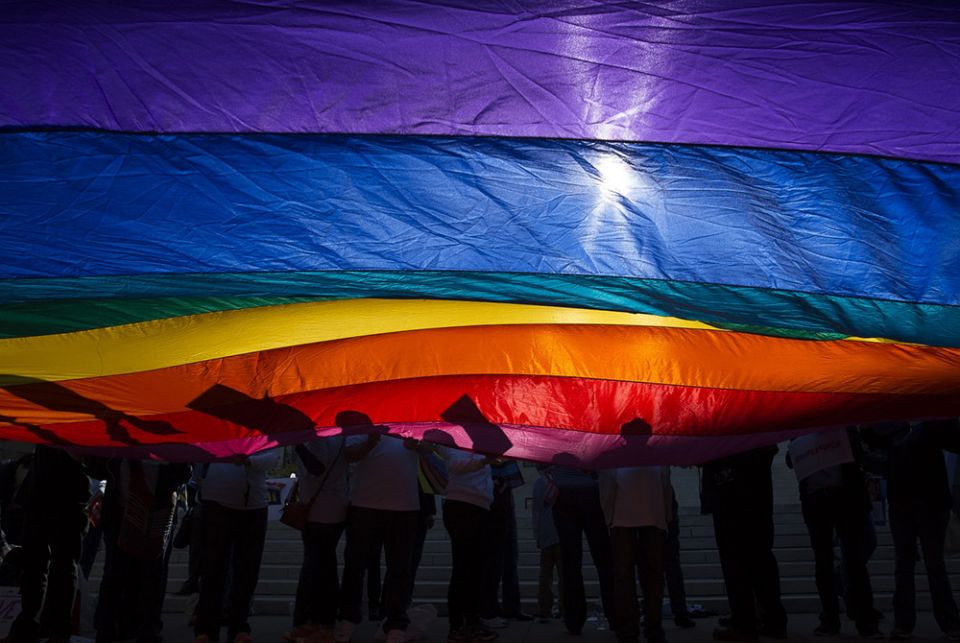 In this 2015 file photo, LGBTQ supporters wave a flag outside the U.S. Supreme Court in Washington. (CNS/Tyler Orsburn)

Less than one month after the bishop of Lexington, Kentucky, joined with Catholics across the country in signing a statement to LGBTQ youth that declared "God created you, God loves you and God is on your side," nearly half of the priests in his diocese have signed their own statement affirming their support of LGBTQ individuals.

In a statement released on Feb. 17 — Ash Wednesday — 21 priests of the Diocese of Lexington said that people of faith have a particular duty to "help, support, and defend" LGBT youth who are at heightened risk of suicide, homelessness, bullying and rejection.

"We make this statement to proclaim to our LGBT community, especially our youth, that we your pastors and priests stand with you, oppose any form of violence directed toward you, and denounce bullying, harmful rhetoric, and harassment directed at you," the statement said. "We pledge to honor, defend, support, and celebrate your dignity in our words and actions because you are beloved members of the Church and reflections of God who created you, loves you more than we can ever begin to imagine, and is on your side."

Twelve bishops and cardinals, along with nearly two dozen religious congregations, have signed on to the original statement, which was organized by the Tyler Clementi Foundation, a group that fights anti-LGBTQ bullying in schools and faith communities. Among them was Bishop John Stowe of Lexington.

"Pope Francis has given an example by meeting with LGBT individuals and same-sex couples; he can affirm their dignity and that they are beloved children of God," Stowe told NCR last month. "That should not be controversial in our Church."

Stanley "J.R." Zerkowski, director of LGBTQ ministry for the Diocese of Lexington and executive director of Fortunate Families, told NCR that over the last five years he has met with priests of the diocese to dialogue with them on LGBTQ issues and concerns.

He said that the beginning of Lent, "a season of renewal, conversion and repentance," seemed to be a fitting time for the priests of the diocese to issue their own statement on the heels of the Clementi Foundation statement.

Zerkowski described the statement as a "public sign of solidarity with our youth," noting that the Lenten season is a time when "we talk about forgiveness."

"The church needs to ask for forgiveness for some of the rhetoric we've used and for some of the attitudes we have not stopped and we've even perpetuated," Zerkowski said. "We begin a new road of renewal and accompany Jesus as he comes to us in our siblings who are LGBTQ, especially our youth."

While the statement was signed by 21 of the 46 priests in the diocese, Zerkowski said the statement should not be viewed as "who did and who didn't sign on," telling NCR that priests sign on to a range of specific statements that reflect the particular ministries or programs that they feel called to support.

"If we're asking for respect, compassion and sensitivity," he said, citing the language of the Catholic catechism in describing how the church should treat LGBTQ persons, "then we also have to extend that back to those men who are not at the point where they felt comfortable or maybe thought it was not necessary to sign that statement."

Zerkowski said that the Lexington Diocese has become widely recognized for its LGBTQ ministry, and that he hopes the new statement prompts further conversation among priests throughout the country.

"I hope this statement spurs other presbyterates to make a public stand with those who are on the periphery and often those that are subject to higher rates of suicide," he said. "If we're a people of life, let's put our names to that."

And for the LGBTQ youth that the statement is directed at, Zerkowski says he hopes it offers a "clear signal" that they are welcome by the Catholic Church and are not alone.

"For people who thought there was no place for them or that their priests had no use for them," he said, "I hope they see there are places to come home now."