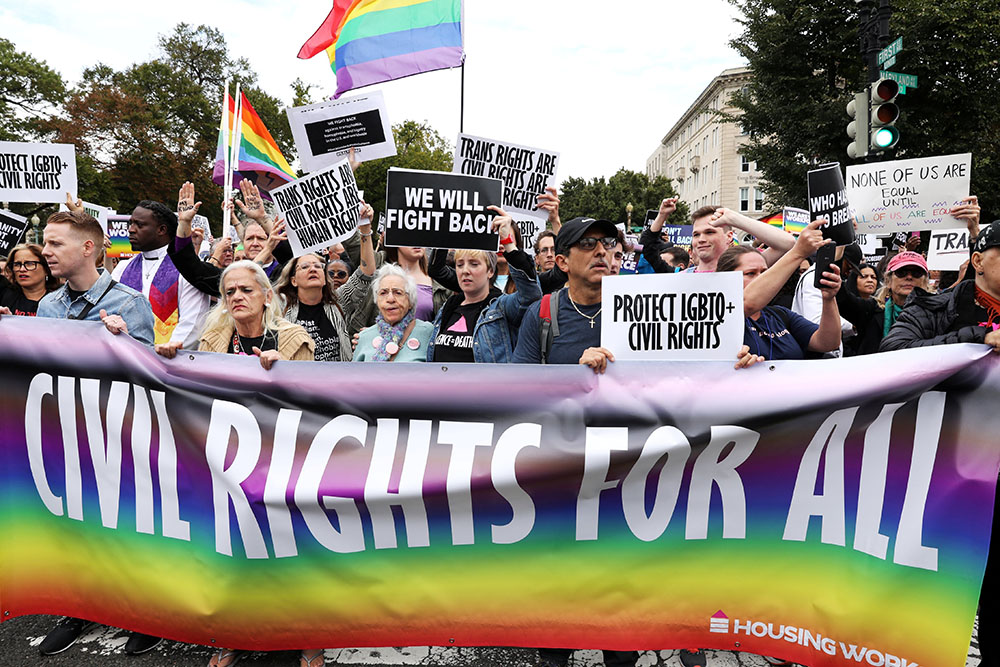 While some Catholic bishops — including a cardinal — recently signed a statement in support of LGBTQ youth, others released a statement opposing an executive order by the Biden administration extending federal nondiscrimination protections to LGBTQ people.

One statement, titled "God Is on Your Side: A Statement from Catholic Bishops on Protecting LGBT Youth," was released on the web page of the Tyler Clementi Foundation — a group that fights anti-LGBTQ bullying in schools and faith communities.

The statement says Jesus taught mercy and compassion for all, particularly those who are marginalized and persecuted, and that the catechism urges Catholics to treat LGBTQ people with "respect, compassion and sensitivity."

"All people of goodwill should help, support, and defend LGBT youth; who attempt suicide at much higher rates than their straight counterparts; who are often homeless because of families who reject them; who are rejected, bullied and harassed; and who are the target of violent acts at alarming rates," the bishops said in the statement.

The statement has been signed by nine Catholic leaders:

"The Catholic Church values the God-given dignity of all human life and we take this opportunity to say to our LGBT friends, especially young people, that we stand with you and oppose any form of violence, bullying or harassment directed at you," the bishops said in their statement. "Most of all, know that God created you, God loves you and God is on your side." 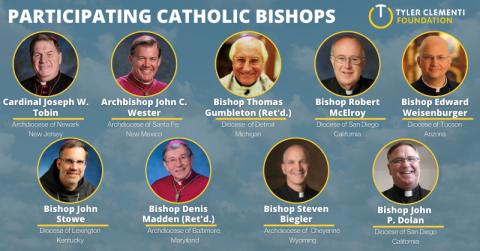 A graphic shows the signatories of "God Is on Your Side: A Statement from Catholic Bishops on Protecting LGBT Youth" as of Jan. 25. (Tyler Clementi Foundation)

Stowe said in an email to NCR that he is concerned about the LGBTQ young people in the Catholic Church and Catholic institutions who "are not protected from bullying and from the personal harm that can result from ridicule, shaming or hearing repeatedly that one is condemned because of their sexual orientation."

The foundation's namesake, Tyler Clementi, died by suicide in 2010 at the age of 18 after he was relentlessly harassed and cyberbullied for being gay.

Lesbian, gay and bisexual youth are almost five times as likely as their straight peers to attempt suicide, and more than one-third of transgender people have made a suicide attempt by age 25, according to statistics compiled by the Trevor Project, an LGBTQ suicide prevention organization.

Having just one accepting adult in their life can reduce an LGBTQ young person's risk of suicide by 40%, the Trevor Project reported.

Stowe said too many Catholics emphasize the catechism's prohibition on same-sex relationships while downplaying the inherent dignity of LGBTQ people.

"Pope Francis has given an example by meeting with LGBT individuals and same-sex couples; he can affirm their dignity and that they are beloved children of God," Stowe said. "That should not be controversial in our Church."

Bishop McElroy said he wanted to let LGBTQ young people know that "Christ stands with them in this suffering."

"It is utterly repugnant to engage in any act of bullying or violence or condemnation against these young people because of their orientation," he said.

"To me, it just seemed like what Jesus would do," said McElroy of signing the letter in support of LGBTQ young people. "The suffering of people who are LGBTQ who are bullied, and unjustly discriminated against … is a sin and a scourge on our society and our church."

Marianne Duddy-Burke, executive director of the Catholic LGBTQ advocacy organization DignityUSA, was pleased that a group of Catholic bishops were willing to sign the statement. "Given that this statement asks for nothing more than human dignity, I would hope that more bishops would add their names," she said.

Duddy-Burke said she hopes the statement will lead to other conversations about what it means to "really stand with" LGBTQ youth and their families and provide them with the safe spaces they need to flourish.

In order to fully support LGBTQ youth, she said, church leaders must attend to the youth's "need not to hear themselves preached about in negative terms, need to not be excluded from Catholic education programs, [and the] need for parents to feel that they can love and support their kids just as they are."

The other statement, released Jan. 22 by the U.S. Conference of Catholic Bishops, expresses "concerns" with President Joe Biden's decision to extend existing federal protections against sex discrimination to include LGBTQ people.

The conference's statement was signed by the chairmen of several major committees:

Biden's executive order, signed Jan. 20, was based on the 2020 case Bostock v. Clayton County, in which the Supreme Court ruled that protections against sex discrimination in Title VII of the Civil Rights Act of 1964 also prohibit employment discrimination based on sexual orientation or gender identity.

The court's main argument in Bostock was that anti-LGBTQ discrimination in the workplace punishes people for "traits or actions it would not have questioned" in people assigned a different sex at birth, which is a form of unlawful sex discrimination.

In response, the bishops' conference statement argues that the Bostock decision "needlessly ignored the integrity of God's creation of the two complementary sexes, male and female, with reasoning that treated them as devoid of meaning."

The bishops wrote that the order goes beyond the intent of the Bostock decision, which was focused on cases related to employment, and threatens the religious liberty of those who believe LGBTQ people should not be allowed to marry or transition.

The order "threatens to infringe the rights of people who recognize the truth of sexual difference or who uphold the institution of lifelong marriage between one man and one woman," the bishops wrote. "This may manifest in mandates that, for example, erode health care conscience rights or needed and time-honored sex-specific spaces and activities."

The bishops said they "share the goal of ending unjust discrimination and supporting the dignity of every human" but that they "regret the misguided approach" the Biden administration took in signing this order.

In response to the conference's statement, Francis DeBernardo, executive director of New Ways Ministry, a Catholic LGBTQ advocacy organization, said in a statement that while they may differ from those of the bishops, Biden's views on LGBTQ rights are in line with those of most Catholics.

In a 2019 poll, the Pew Research Center found that 61% of U.S. Catholics support gay marriage and 76% of them believe homosexuality should be accepted by society.

"The bishops' comments on Bostock indicate that they would want Catholic teaching on gender and sexuality to be the law of the land," DeBernardo said, "even if those views differ from the majority of people in the nation — not to mention the views of the majority of U.S. Catholics."