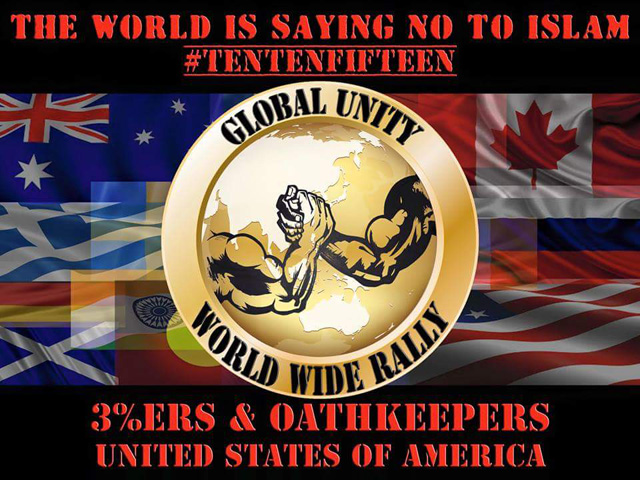 Muslim leaders and anti-bigotry activists are girding for a weekend of protests -- some billed as “open-carry events” -- by groups known for their anti-Muslim views.

“We’ve never had this many events at once targeting mosques in this kind of national way,” said Heidi Beirich, who tracks hate groups at the Southern Poverty Law Center.

Organizers, who are calling for protests on Friday and Saturday are billing the events as the “Global Rally for Humanity.” Beirich describes the protesters as a loose affiliation of anti-Muslim extremists who do not seem to be organized by larger, better-known anti-Muslim groups, such as Pamela Geller’s American Freedom Defense Initiative.

“This mix of racist groups, anti-Muslim groups and anti-government groups is basically a recipe for disaster,” Beirich said.

Kalia Abiade, of the Center for New Community, a Chicago-based anti-bigotry group, said some of the largest crowds are expected to protest outside mosques and Muslim community centers in Phoenix; Arlington, Texas; Dearborn, Mich.; and Ocala and Spring Hill, Fla. At least 20 protests are planned.

Law enforcement agencies -- from the Department of Homeland Security to the FBI to local police -- are working with mosques and Muslim community centers to help keep them safe, said participants in a Thursday conference call hosted by the Center for New Community and other groups concerned about the vitriol of the protesters and the potential for violence.

Some mosques are hiring off-duty police to increase security. Muslim leaders are reviewing safety procedures with congregants and, in some cases, organizing counter-events, such as the free community health clinic planned in Spring Hill, Fla.

Paul Galloway, executive director of the American Center for Outreach in Tennessee, said law enforcement agencies in Tennessee’s urban areas have been exceedingly cooperative as Muslims prepare for a possible onslaught of anti-Muslim sentiment.

But in the past three months alone, he added, two Tennessee sheriffs have publicly made anti-Muslim comments. In more rural areas where sheriffs are elected, such bigotry “degrades our confidence in law enforcement,” he added.

Galloway is working to protect the mosque in Murfreesboro, Tenn., which was picketed by anti-Muslims even before it opened in 2012.