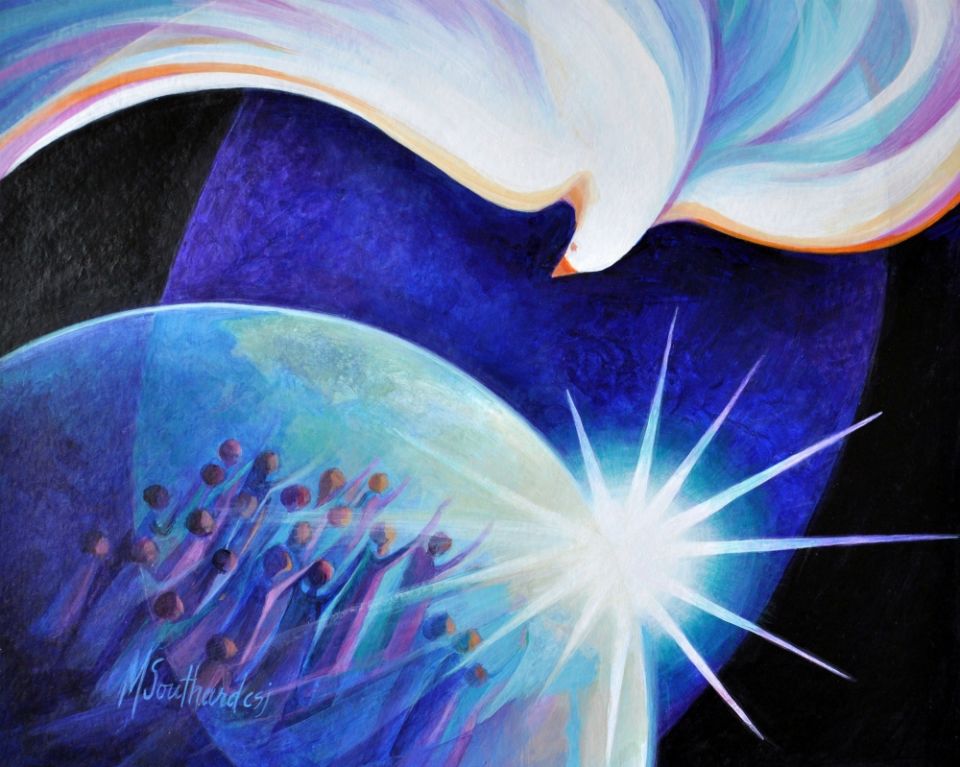 OK, so I haven't been in the greatest personal space lately. Maybe it's because I had a knee replacement in the middle of June followed by intensive and — thanks to long-suffering physical therapists — successful rehab. But I had little energy for anything besides watching cable news and HGTV reruns on the oh-so-appropriately-named boob tube.

I felt internally "flat" and missed the quiet sense of God within. This is always painful, since I tend to focus on everything that is wrong with me, with U.S. policy, and with the universe. Maybe it was anesthesia after-burn but I suspect there is more to it.

With more time to reflect, I found myself facing the hard question "Just where is God, anyhow?" in the current political travesty afflicting the poor and those fighting for the common good. Immigrants, refugees, those in need of health care, religious and racial minorities, the environment, and LGBT persons are all under attack by a Republican Congress and Donald Trump's White House.

I know I'm not alone. After initially succumbing to hopelessness and posting his anguish on Facebook, a retired, well-respected Cleveland politician started a new group called "The Fearless Loyal Opposition." Members often post about how discouraged they are about the apparent failure of progressive political endeavors.

Watching incessant cable news doesn't help. It can slowly lead me down a rabbit hole of alienation from the divine energy that my faith experience tells me is always at work — even in the midst of dereliction, be it personal or political.

While providing needed information and analysis, cable news can also feed the conceit that knowledge alone is enough to meet the current crisis.

So, what to do? For me, only a renewed conviction that I belong to God — and a cessation of internal naysaying — brought any peace.

That, and actively praying about it all.

Last night before going to bed, I prayed my "vulnerable prayer" on behalf of the millions who would lose health care if the so-called "skinny repeal" passed the Senate, as it seemed it would. I wanted to stay up to watch but had an early appointment and couldn't.

My "vulnerable prayer" means that I remember that I/the poor are helpless in the face of evil/oppression by the powerful. And so, it is important to cast ourselves into the infinite mercy of God, knowing that we are powerless to overcome, and therefore this is a God job. I have found it so helpful in my own fragile states — somehow it relieves me of responsibility, or believing I should have power over every evil.

As I was drifting off to sleep, it occurred to me that John McCain could easily be the third Republican "no" vote. He is a man of principle who was clearly disgusted with the corrupt, self-serving process railroading the bill through. I awoke with knee pain two hours later — just as McCain was voting no. I wept. And I weep now just thinking about it — our God does hear the cry of the poor.

If I didn't believe in a God who is on the side of the impoverished — whether materially or spiritually — I would remain in a permanent state of cynicism and despair.

Each of us is part of the God-energy at work in the world. It is the love-energy for which we all hunger, and in which we "live and move and have our being," although we may call it by another name.

Our activism, our getting informed, our working for justice and peace "on earth as in heaven," is an indispensable part of the equation.

But it is not the only part.

The other part is the recognition that we are powerless over the forces of evil — whether in ourselves or in our country — but God is not. And so, we must rest there and await the wind of the Spirit to help us see what is ours to do — and what is not ours to do. And then we must carry it out. For me, the latter of the two is especially significant. My overachieving messiah complex will sometimes guilt me into believing it is my responsibility to save the world.

It is not. That belongs to a God who is infinite and incomprehensible love.

A God who loves Donald Trump and Mitch McConnell and Nancy Pelosi and Hillary Clinton. (I did mention "incomprehensible," didn't I?)

I share this because I doubt that I'm the only overachieving activist who is vulnerable to being both discouraged, and mean-spirited toward my political opposites.

When despair happens, it is good to remember that our responsibility is to shelter within the God-love until we are shown the part that is ours to play in building the reign of God.

While writing this column, I learned of the violence and death suffered by people protesting the racist, anti-Semitic, white supremacist rally in Charlottesville, Virginia, last weekend. I watched our President gaslight about despicable behavior by saying it belonged "on many sides."

Republican Sen. Cory Gardner promptly tweeted this truth-to-power reply: "Mr. President — we must call evil by its name. These were white supremacists and this was domestic terrorism."

Mr. President - we must call evil by its name. These were white supremacists and this was domestic terrorism. https://t.co/PaPNiPPAoW

Sometimes our part to play means speaking truth to power and risking our lives, as did so many courageous religious leaders last weekend.

And maybe then — Trump and company notwithstanding — God's new reign of justice and peace will dawn at last.