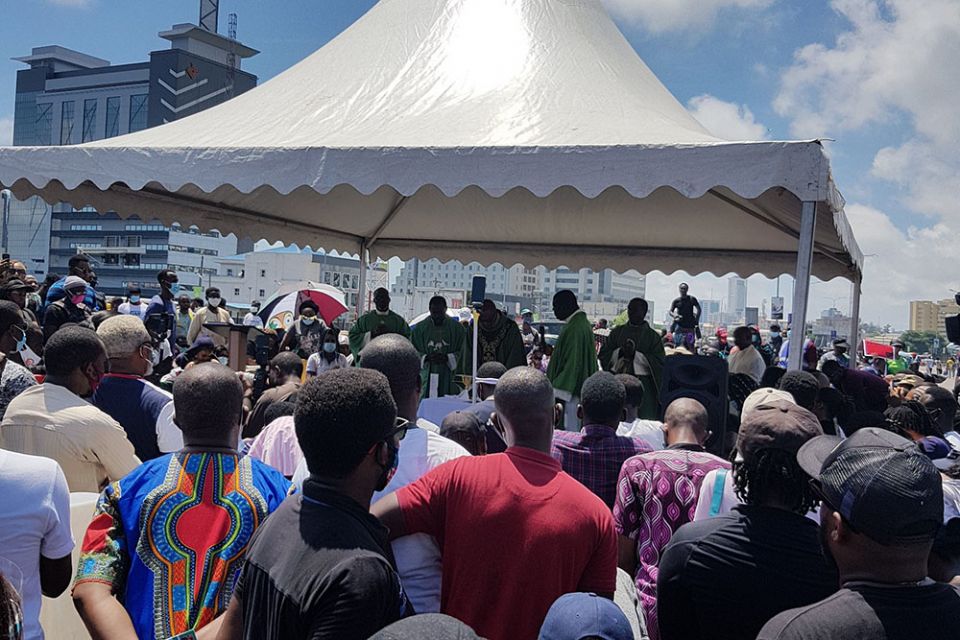 Abuja, Nigeria — The Lekki Toll Gate in Lagos, Nigeria's financial center and the most populated city across Africa, has been the site of demonstrations for weeks, as part of a national movement to demand an end to a notoriously violent police unit.

But on Oct. 18, the area was also the venue for an outdoor Catholic Mass. Although Catholic officials were careful to say the celebration itself was not a sign of support for the protests, bishops here have openly supported peaceful protesters and called on the government to address a range of human rights issues. 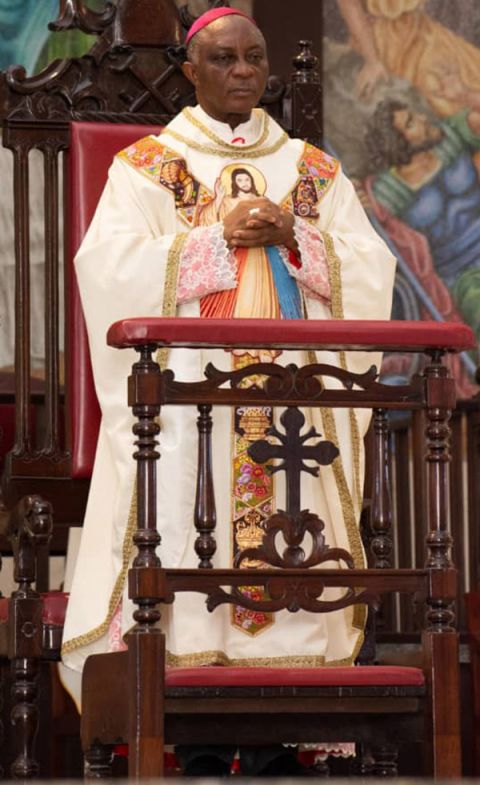 The stakes are high. Just 48 hours after the Mass, Lagos authorities declared a 24-hour curfew to stop the growing protests. In the evening that same day, soldiers stormed the venue and opened fire on the peaceful protesters, most of whom were sitting down and singing the national anthem.

"I am not sure we have had a day that is as bad as that in our country, that soldiers will see people without arms and then shoot at them," Lagos Archbishop Alfred Martins, who has been one of the strongest voices in the ongoing campaign, told NCR.

"It was very sad to see that men in uniform were opening live ammunition on them," said the archbishop. "It was very painful, to the extent that people were badly injured and we hear that there were even fatalities." (Amnesty International reported 12 deaths.)

For two weeks, the protesters, mostly young Nigerians, had been joined by others who thronged the streets in dozens of cities and towns across Nigeria to demand the disbanding of the Special Anti-Robbery Squad, or SARS.

Originally set up by the Nigeria Police Force in 1992 to combat rising violent crimes such as kidnapping and armed robbery, the squad became notorious for undue profiling and stereotyping. Its officers are known to harass and extort young people who own cars or expensive electronic devices, claiming they are thieves.

In a report in June this year, Amnesty International detailed how SARS personnel tortured and killed people on at least 82 occasions since January 2017.

Martins has been supportive of the protestors from the beginning. Three days after the protests began on Oct. 7, he issued a statement calling on the Nigerian government to act decisively, describing the reported rights violations as "incredibly sad and troubling." 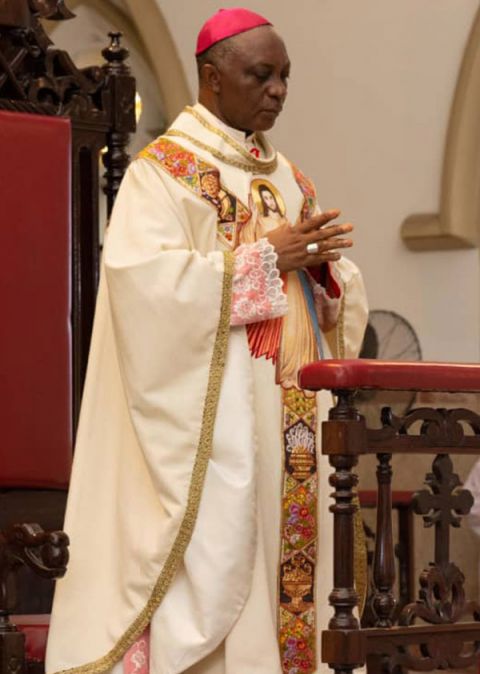 "The only way of assuaging the anger in the land now is to ensure that the guilty ones are brought to face the law and justice seen to have been done," the statement read, adding that "such heinous crimes must not be condoned or allowed to continue."

A day after, the country’s police chief bowed to growing pressure and disbanded the notorious police squad. But the protests have now transformed into a wider campaign, with calls for better governance in addition to a host of other demands, including justice for victims of police brutality.

Protesters have lamented that despite being Africa's largest producer of oil, with a maximum capacity of 2.5 million barrels per day, Nigeria remains the world capital of poverty with almost half of its citizens living on less than $1.90 a day.

The Nigerian Catholic Church has often been seen in the front line for advocacy for the protection of human rights.

With protests against police brutality under the youth-led #EndSARS movement, the Catholic Bishops' Conference of Nigeria put their weight behind the campaign and called on authorities to "once again to listen to the cry for justice so that peace can reign in our country."

"EndSARS goes beyond the SARS and it is morally justified. We support the youths who have taken this step and we caution that they are allowed without any intimidation to exercise their right to peaceful demonstration," local media quoted the bishops' conference.

A day before the outdoor Mass at the stadium in Lagos, a rosary walk was also held at the venue, as protesters called for the intercession of the Blessed Virgin Mary. The Mass, which Martins told NCR was originally meant for Catholics who joined in the protests, turned out to be a uniting and motivating factor also for non-Catholics taking part.

One of those who attended the Eucharistic celebration said she is not a Catholic but felt "something wonderful and moving" amidst the singing of hymns.

Two Catholics who were also there told NCR of how they have been actively involved in the protests and commended the Catholic Church for stepping up for guidance in times like this.

For Adedamola Idowu, who had returned to that particular venue for the third time, "celebrating the Mass there was a laudable move by the Catholic Church."

"It was really nice that the church thought it wise to bring the Mass to that same ground so that we can also listen to the Mass and join others who are protesting," Idowu told NCR, before admitting that "I am scared for myself and for my family [because] a lot of people have been killed even outside the protest ground."

Fr. Emmanuel Bekomson, a priest in southern Nigeria’s Cross River state who has consistently condemned police brutality on his social media accounts, said it is the duty of the church "to provide spiritual care and support for her children despite the circumstances."

Currently a chaplain at a teaching hospital, Bekomson told NCR: "The church is a mother filled with sympathy and empathy, and it is the duty of the mother to provide spiritual care and support for her children despite the circumstances.

"The church has been very vocal but what the church will not do is to ask people to take arms. We can't in a bid to save ourselves kill more lives. The church believes in dialogue and that, for me, is a solution to this problem."

Although Nigerian President Muhammadu Buhari eventually bowed to pressure and gave a nationwide broadcast following the attack on protesters, his decision to not say a word about protesters who were shot at by the country’s security personnel did not come as a surprise.

A day before the president’s broadcast, Bishop Mattew Kukah, who leads the Sokoto Diocese and is one of the most vocal clerics in the country, called the president out for often being missing in action at times of national crises.

"Nothing is ever going to work in this country because the sickness is still there; the cancer that is consuming every aspect of public life, that is the cancer of greed, the cancer of nepotism and the cancer of selfishness, which is what in total we call corruption," said the bishop, who is also the convener of the National Peace Committee, an initiative that advocates for the peaceful holding of elections in Nigeria.

As the curtain draws on the protests, there are still high hopes that the journey to reforming the country’s police force, which is poorly ranked globally, has just begun.

However, for Martins, the measures being introduced must go beyond ensuring justice for victims of police brutality to addressing the root cause of the problem.

"The police themselves are not well taken care of," the prelate told NCR. "If men and women of the force are able to have some pride in the work they do, I believe it will also change their mindset a lot better."

"They need to be trained and retrained as well to especially help to reorientate their direction so that they engage people not as enemies and not as 'they' and 'us,' but rather as people that deserve respect and deserve to be taken care of when there is a need," said Martins.

[Chinedu Asadu is a Nigerian journalist currently working as a staff writer with TheCable, the country’s independent online newspaper.]