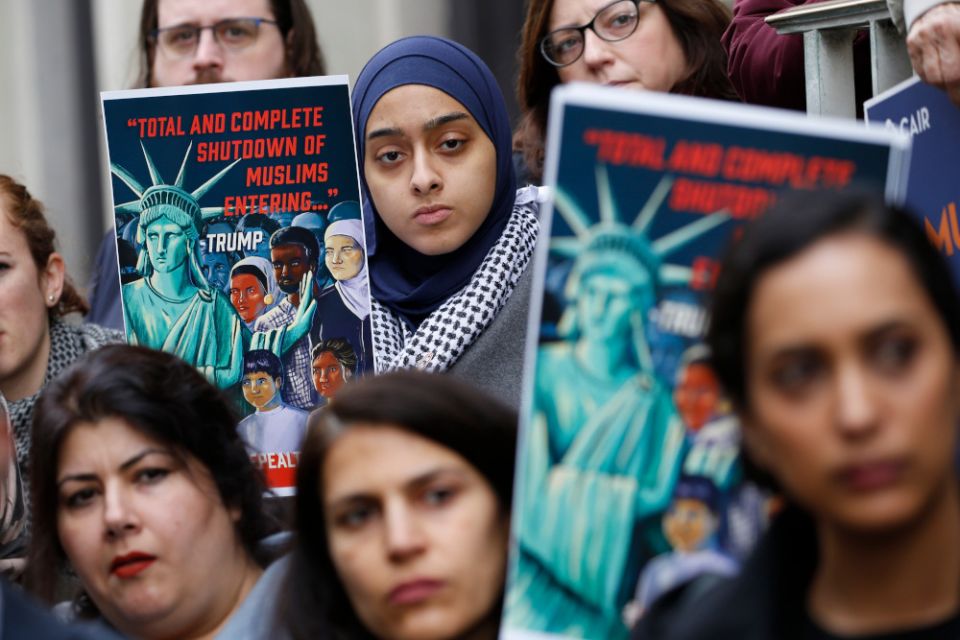 Demonstrators listen to speakers during a rally outside the U.S. 4th Circuit Court of Appeals Tuesday Jan 28, 2020, in Richmond, Va. (AP/Steve Helber)

Muslim, African and Arab Americans and civil rights advocates are breathing a sigh of relief after President Joe Biden's long-anticipated reversal of the travel ban, which has separated thousands of families since it was issued in former President Donald Trump's first week in office.

Biden's fulfillment of his day-one promise to Muslim supporters, which he first announced at a Muslim conference in July, signals "a new direction on immigration law and policy, moving away from the Trump Administration's draconian policies," the American-Arab Anti-Discrimination Committee said in a statement.

For Ramez Alghazzouli, a Syrian immigrant who had been separated from his wife for a year due to the travel ban, the reversal felt like someone had finally removed the boulder sitting on his chest for years.

But he said Biden's executive action cannot undo the damage done by the ban, which critics decried as racist, senseless and inhumane.

"The ban itself will be reversed but no one can reverse our feelings and emotions and the time we lost while being separated from each other," said Alghazzouli, who hopes his parents will soon be able to come to the U.S. and meet his baby. He said his mother's immigrant visa is being held up due to the ban.

"It'll still be part of our life and history," he said. "The Muslim ban is the nuke that we survived but we are still suffering from its collateral damage."

Over the last four years, more than 41,000 visa requests have been denied due to the ban. The policy also prevented life-saving surgeries for individuals from banned countries, while also limiting America's own health care workforce amid a pandemic.

Still, the rollback marks "an unprecedented victory for Muslims and allies, who flocked to airports to protest this ban and never stopped fighting and organizing to bring it to an end," said Farhana Khera, executive director of Muslim Advocates.

The order also instructs the State Department to restart visa processing for these countries and calls for a review of the Trump administration's "extreme vetting" practices and a plan to "restore fairness and remedy the harms caused by the ban." 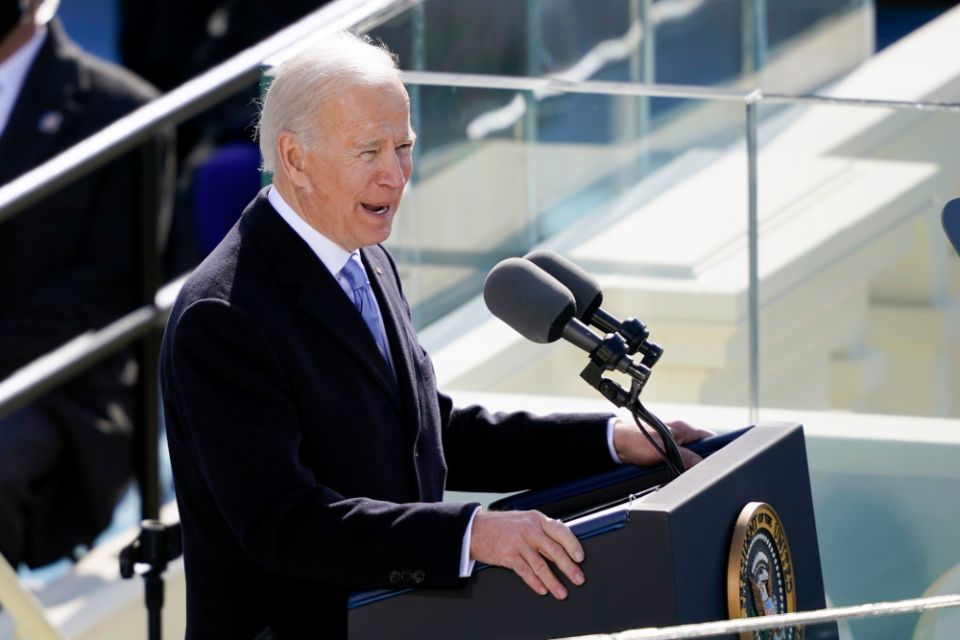 The policy, the culmination of Trump's 2015 campaign call for a "total and complete shutdown" of Muslims' entry, initially banned travelers from seven Muslim-majority countries from entering the U.S. But amid legal challenges, the order went through several iterations before a narrower version was upheld by the Supreme Court. The court's 2018 ruling required that applicants apply for waivers in a process some lawmakers and immigration rights advocates later described as a "sham."

"Tens of thousands of impacted individuals will now have the chance to be with their families during cherished and challenging times," she said. "While we know our work is far from over, today we celebrate the heroic efforts undertaken by so many over the last several years in our effort to repeal the Muslim and African Bans."

Biden also announced he will send the U.S. Citizenship Act to Congress. The legislation includes the No Ban Act, which passed in the House last July and would prevent future presidents from enacting discriminatory travel bans in the future.

The No Muslim Ban Ever coalition has urged the Biden administration to expand refugee numbers from the countries impacted by the ban, ordering expedited consideration of visas for those who have been denied under the ban, and ensuring they have recourse in reversing previous decisions.

"People harmed by the ban will still need to navigate a bureaucratic minefield made even more treacherous by the Trump administration," Khera said. "The Biden administration must take sweeping administrative action to clear away these hurdles and reunite families as soon as humanly possible."

Advocates are urging the government to immediately review all denied cases and allow the requests to proceed under the new order, without any additional fees or interviews for individuals who have already provided them; clear the backlog of cases caught up in administrative systems; process Diversity Visa Lottery winners who were not granted visas due to the ban; and publish all data related to the ban's impact.

But they are also calling for this move to be the beginning of a new widespread immigration reform platform that includes raising the refugee resettlement cap and expanding the Deferred Action for Childhood Arrivals program.

"While we welcome this critical move, we know it's not enough," said Linda Sarsour, who heads MPower Change, a member of the coalition. "We don't want to just go back to four years ago — we want to ensure true transformative change for all immigrant communities through immediate actions like a deportation moratorium and freeing our people from ICE prisons."