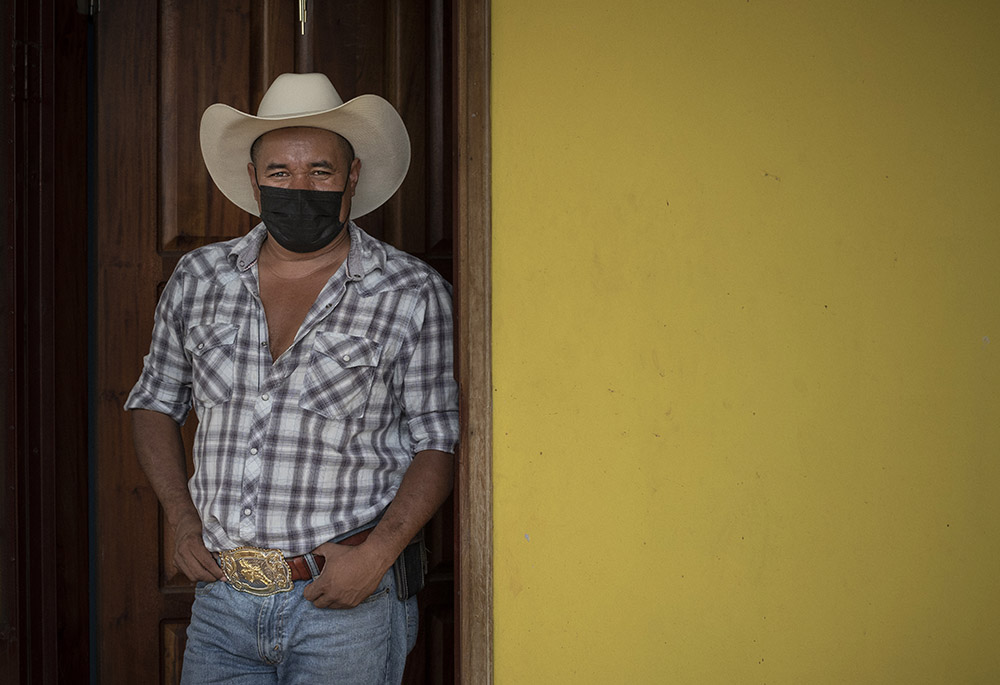 Freddy Murio at the doorway to his home in Yorito, Honduras. After 12 years as an undocumented immigrant in New York, Murio is now running for mayor of his hometown, hoping to address the ills driving an exodus from the country. (Manuel Ortiz Escámez)

Freddy Murillo* leans against the doorframe to his home, his 10-gallon hat and oversized belt buckle making him look like a Honduran version of the Marlboro man. After 12 years as an undocumented construction worker in New York, Murillo is now back in his rural hometown and running for mayor in Honduras' upcoming elections.

As migrants flee the poverty, violence and corruption that are everyday features of this troubled Central American nation, Murillo's story is a striking example of what some here hope will mark a new start.

"I'm a nationalist," says Murillo, his tone steely but soft. A devout Catholic, his fingers encircle the gold crucifix around his neck as he considers the question of whether he was deported or returned willingly. "I came back because I love my town."

Surrounded by verdant hills, Yorito — 200 kilometers north of the capital, Tegucigalpa — is a municipality of some 20,000 residents, many of them members of the Tolupán indigenous community. Most here work the local fields, growing avocados, coffee and raising cattle.

Two years ago, the municipality made headlines when it successfully fought back against plans to establish a mining operation in the region in what locals describe as an attempted hostile takeover of their community. Wielding little more than rocks, residents banded together to expel the company and the armed security guards that accompanied them. 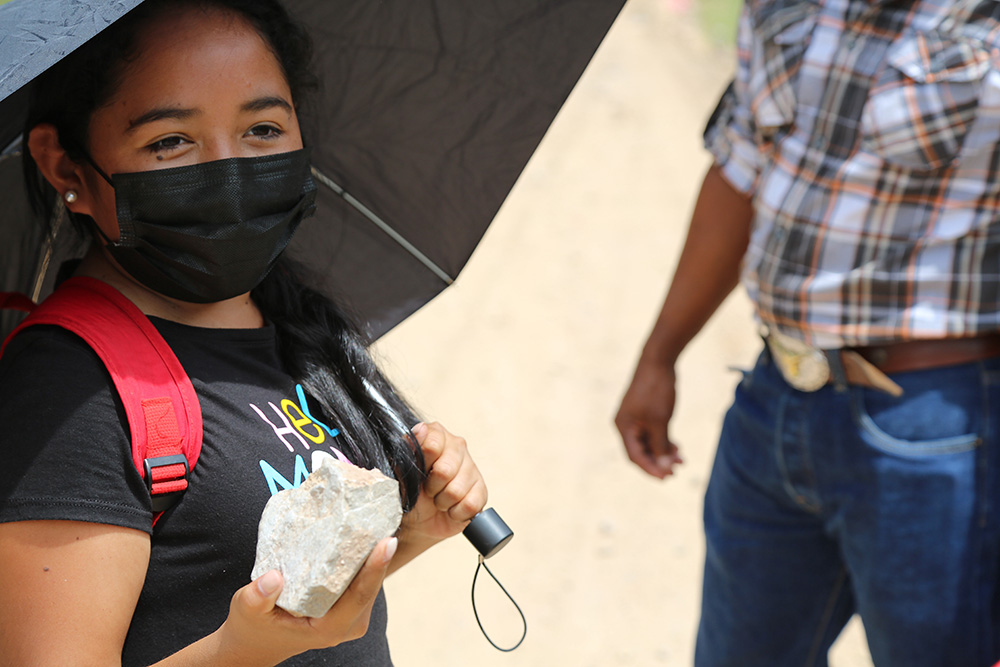 Yorito resident Aura Murillo Torres, 35, holds up a rock as she recalls how two years earlier town residents banded together, armed with stones like the one she holds, to fight off a mining company and its contingent of armed security. (Manuel Ortiz Escámez)

For Murillo, the experience was a defining moment.

"I didn't expect to come back to find a mining company in my town. They came with guns, with machetes. People here were traumatized," says Murillo, adding he is determined to prevent the company from returning.

And that is a distinct possibility, explains Yorito resident Aura Murillo Torres, 35, who says she's only recently become involved in politics and is supporting Murillo's campaign. As she speaks, she holds up a rock much like the ones she says residents used to evict the mining operation two years earlier. "We're tired of the current reality. Everyone is tired. ... We want to see a change with these elections."

A study from July released by a coalition of Jesuit organizations from North and Central America highlights the devastating social and environmental impacts of mining in Honduras that have overwhelmingly impacted poor Indigenous and Afro-Honduran communities, many of which lack formal land titles and are hence more vulnerable to forced displacement.

The report's authors conclude the damages caused by mining extend into all aspects of rural Honduran society, impacting water and food security, as well as economic well-being and political representation.

"The failed state in Honduras and its extractive policies," they write, "have produced a stagnation and decline in the indicators of human security, social progress, and peace." These policies, moreover, stand in direct contradistinction to the principles laid out in Pope Francis' encyclical Laudato Si', of "concern for the good of all citizens, especially of the most vulnerable, as well as for the good of the earth, our common home," the report says.

Many Hondurans point to the military coup of 2009 — a coup the United States is thought to have played more than a passive role in — as the start of a downward spiral that has made the country among the poorest in the Western Hemisphere. The ruling National Party, led by current President Juan Orlando Hernández, whose final term is nearing its end under a cloud of suspicion over alleged links to narcotraffickers, has retained its hold on power ever since.

Vying to replace Hernández for president is National Party candidate and Tegucigalpa Mayor Nasry Asfura, or "Papi" as he is known, whose platform would continue existing policies built around the very same extractive model of economic development that has fueled ongoing violence targeting rural farming communities like Yorito in the north of the country. 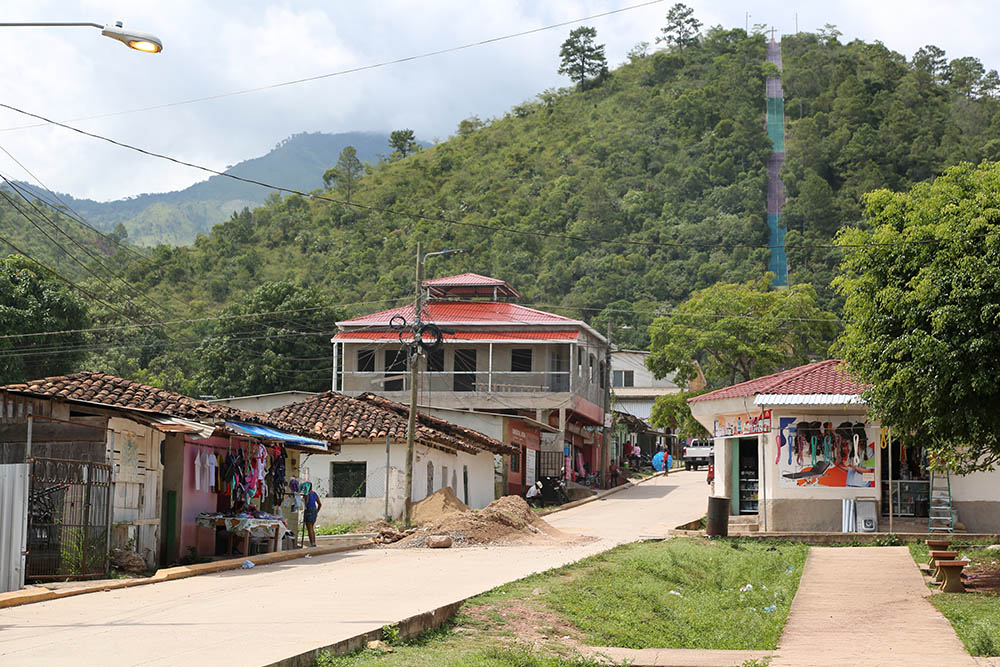 The town of Yorito, about four hours north of the Honduran capital, Tegucigalpa. Two years ago, residents here banded together to eject a mining company from the community. (Manuel Ortiz Escámez)

These same policies have also coincided with the growing swell of humanity arriving daily at the United States border. A June report from the Migration Policy Institute noted one in five Hondurans express a desire to leave the country, with the number of Hondurans detained by U.S. and Mexican immigration officials surging into the hundreds of thousands.

Running against Asfura is the opposition Libre Party candidate, Xiomara Castro, wife of former President Manuel Zelaya, who was ousted in the 2009 coup. Castro has promised closer ties to China and a move away from the free-market capitalism that currently reigns here.

"The only opportunity for the country to build a democratic foundation is through the coming elections," says Rixi Moncada, a lawyer and part of a three-person rotating chair with the newly created National Electoral Council, or CNE as it's known by its Spanish acronym, responsible for delivering the final vote tally once the polls close. 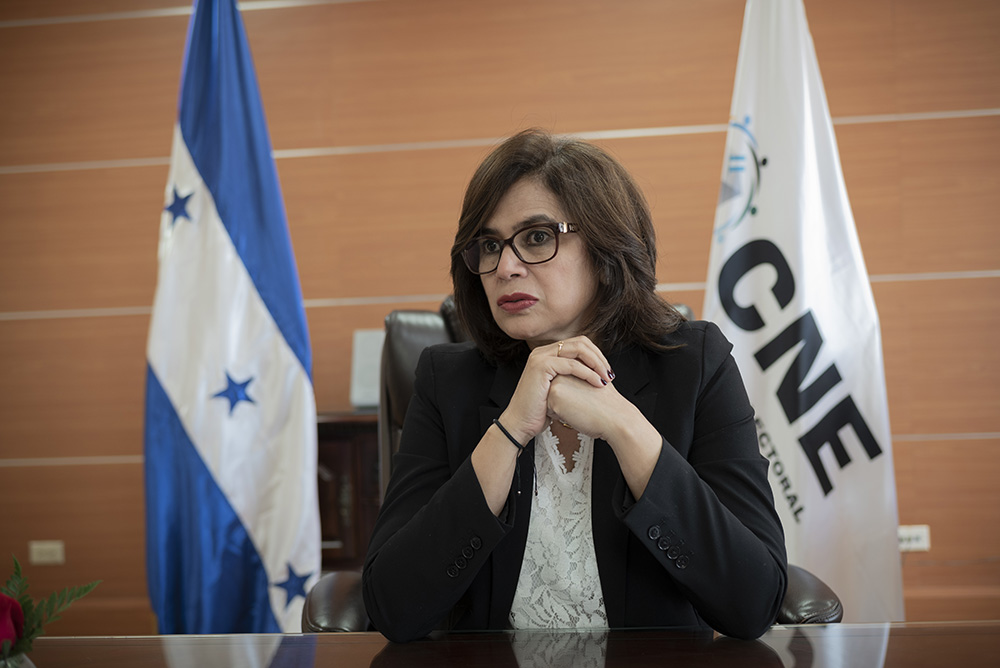 Rixi Moncada is a member of the newly created National Election Council, tasked with voter registration and certification of the final vote count, in her office in the Honduran capital, Tegucigalpa. (Manuel Ortiz Escámez)

Moncada, a former official in the Zelaya administration, recalls walking three days to cross into Nicaragua following the 2009 coup, an experience she says steeled her against the tactics of fear and intimidation that have become hallmarks of Honduran electoral politics.

Still, she admits, safeguarding the integrity of the coming election, scheduled for Nov. 28, will be no easy task. "No one is prepared for the criminality," she says, referring to the ongoing political violence that she sees as an extension of the coup. "We are prepared for the process."

More than two dozen attacks on candidates and their families have been reported since campaigning began in February, including the recent killing of a local mayoral candidate.

Gustavo Irias, executive director of the nonprofit CESPAD, which advocates on behalf of Honduras' marginalized communities, says that, regardless of who wins, the critical factor for the nation is to ensure the legitimacy of the vote, to begin to rebuild the trust and confidence of Hondurans in their leaders and in their democracy, a trust that was shattered in 2009. 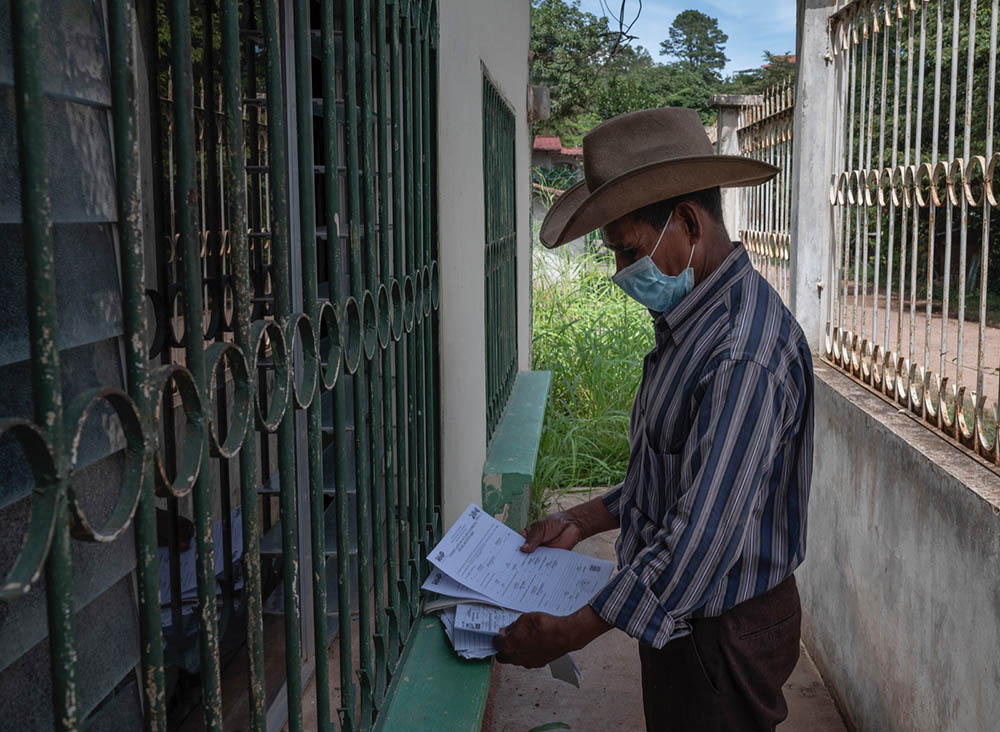 A resident of Yorito prepares his voter registration forms ahead of elections in November. Officials say no matter who wins, ensuring transparency and legitimacy in the election process is key to turning the corner in a nation beset by endemic poverty, corruption and violence. (Manuel Ortiz Escámez)

"This is a chance for Honduras to recover its sense as a nation," Irias says.

Not everyone is as sanguine.

"Nothing is going to change," insists Tegucigalpa resident Victor Manuel Mayorga, a public employee who says he has not been able to retire because the government has stolen the state's pension funds. At 79, Mayorga is part of a tiny minority of senior citizens in a country where the median age is just 24 years old.

Sitting in the capital's central plaza, in the shadow of the 18th-century Church of Santa María de los Dolores — one of Central America's oldest churches — he bemoans the lack of education and health care, and accuses officials of all political stripes of abandoning the country.

"I believe in democracy, but in Honduras it is broken. It's been broken since the coup," he says.

Honduran bishops, meanwhile, are urging residents to overcome that sense of apathy and frustration, at the same time calling for voters to shun candidates "stained" by links to drug traffickers, a tall order in a nation where the influence of oligarchs and cartels are inextricably intertwined with party politics. 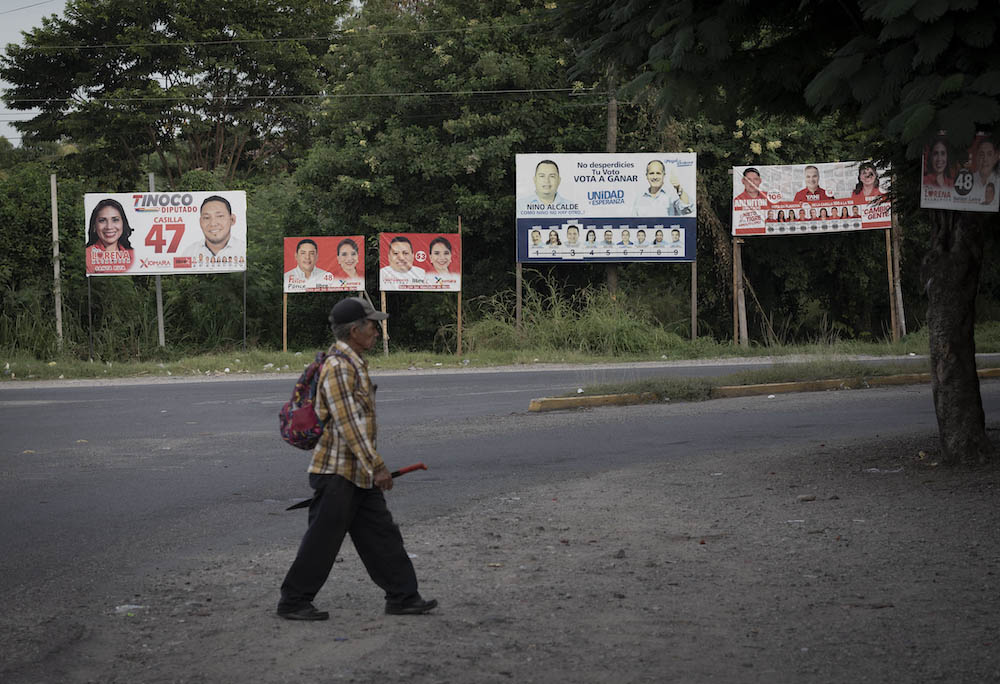 Campaign signs pepper the landscape in Honduras, where voters will cast their ballots in an election some say could mark a new beginning for the troubled Central American nation. (Manuel Ortiz Escámez)

Church leaders are also warning of vote-buying campaigns that offer modest cash payments or other social programs in exchange for party loyalty. Funding for one such program, "Bono Vida Mejor," or Better Life Bonus, was just approved by the government and would dole out cash payments of roughly $300 to eligible families, "money for financing political campaigns and buying consciences in the general elections," according to CESPAD.

Back in Yorito, residents are all too familiar with the Bono Vida program, recalling past elections where, under the same program, officials offered handouts of fertilizer to local families in exchange for their support, fertilizer families here say already belonged to them.

As we tour the town, Aura Murillo points to a crumbling concrete fence intended for a local soccer field. The wall stands unfinished, its funds having disappeared, one small example of the rampant corruption — studies estimate that $10.3 billion was lost to graft in the country between 2014 and 2018 — that continues to eat at the foundations of Honduran society.

But in place of despair, residents here express a gritty determination to turn things around. "We are working for the basics," says auto mechanic Cesar Nahun Aquino, "to get rid of corrupt elections, to regain transparency, and to rebuild the local economy so that it benefits the community." 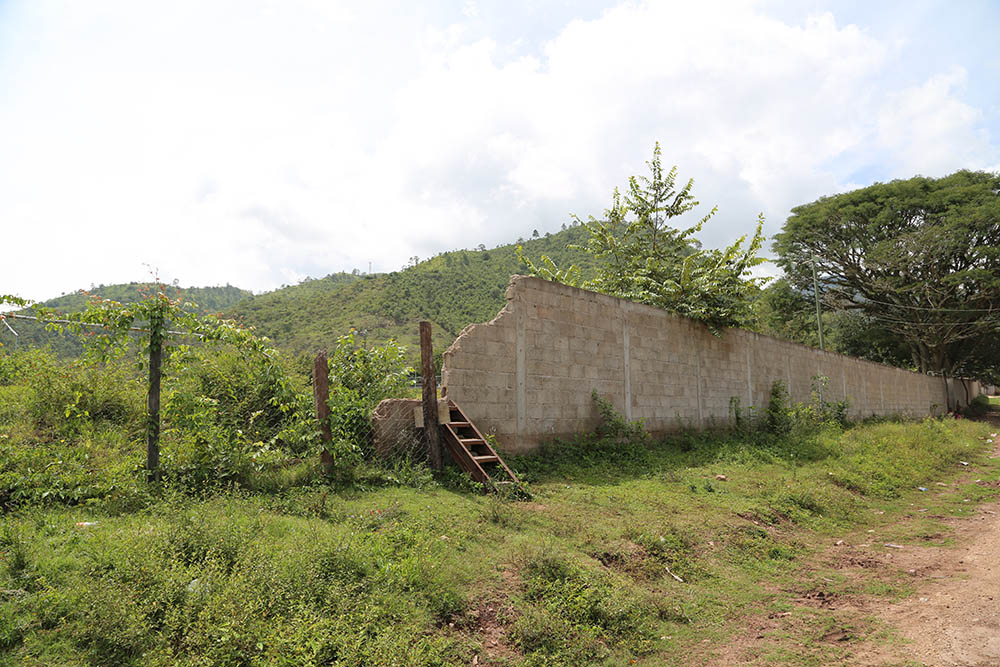 A crumbling, half-finished fence runs through a section of Yorito. Initially meant to encircle a nearby soccer field, funds for the fence vanished in what residents say is one small example of the deleterious effects of corruption on the nation. (Manuel Ortiz Escámez)

Aquino says the only way to begin to transform conditions is from the ground up. "We have to start with our region, with our municipality, before we can begin to change the country."

Sitting under the shade of his patio, Murillo tells of a local legend involving a monkey that lives on the other side of the hill facing his home. According to town lore, the monkey sneaks into homes at night to steal from residents. It's an apt analogy.

Still, despite his community's experience, Murillo is running on the National Party ticket — the same party driving the boom in mining across the north of Honduras. It is, he insists, the only way for Yorito to begin to reclaim its autonomy, using available levers of power to wrest control from those who would do the community harm to line their pockets.

Reflecting on his time in the United States, he says, "Living in New York was like a school for me. I learned what it means to build community there."

*The spelling of Freddy Murillo's name has been corrected throughout the story.

He's now taken those lessons back home, his path moving, as it were, upstream of the flow of migrants heading desperately in the opposite direction. Looking ahead to the coming elections, he echoes the sentiment of those in his town who successfully staved off the powers that be.

"We want to live in peace. We want to be able to solve our own problems. This is a time of hope."

A version of this story appeared in the Dec 10-23, 2021 print issue under the headline: Hoping to fix Honduras one election at a time.