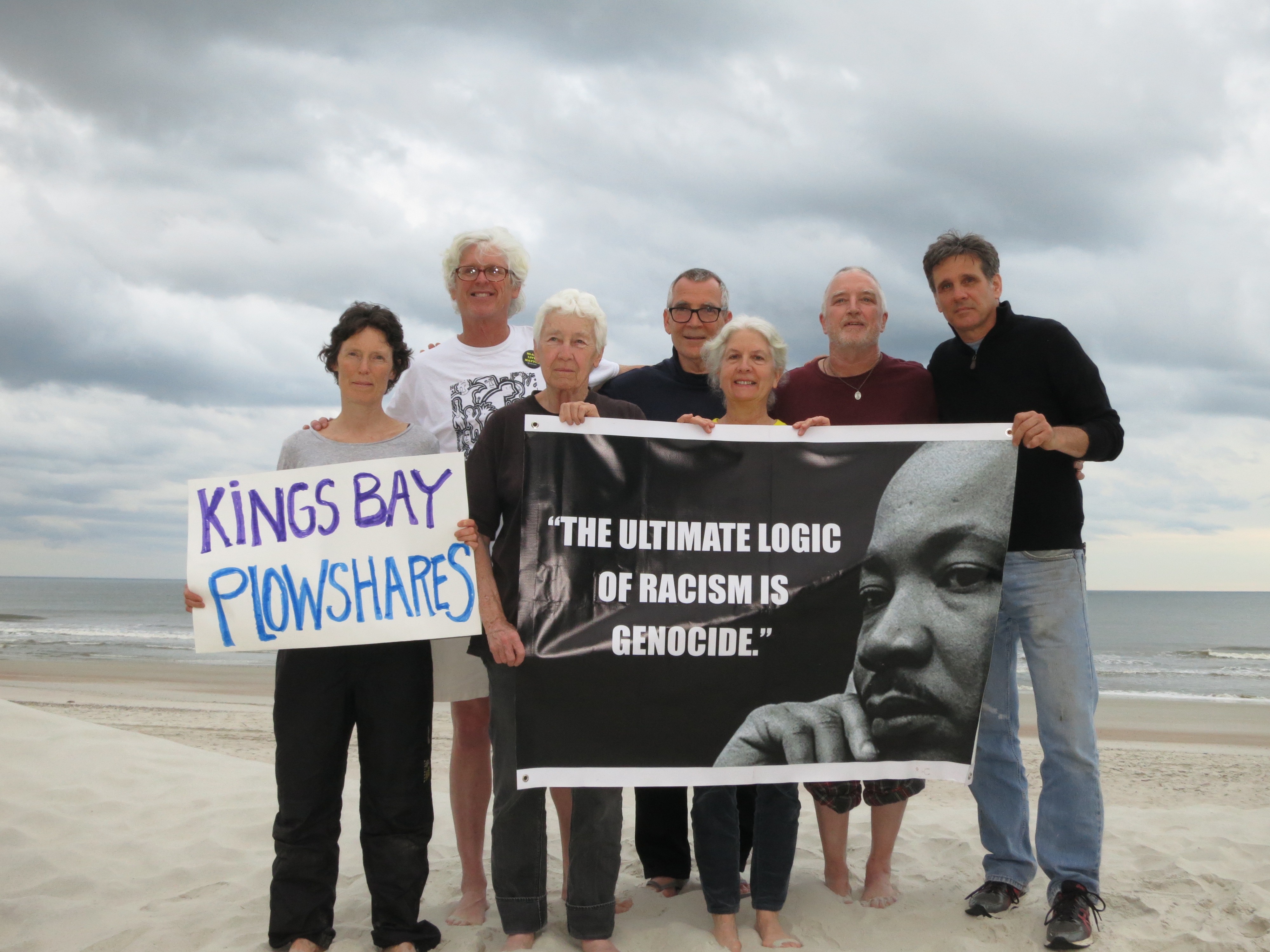 Seven activists from the Catholic Plowshares movement were arrested the morning of April 5 after breaking into a nuclear submarine base.

According to a press release by Kings Bay Plowshares, the activists entered the base the night of April 4, the 50th anniversary of the assassination of the Rev. Martin Luther King Jr. Once on the base, the activists split into three groups, with some going to an administration building, some to a D5 Missile monument, and others to the weapons bunkers.

The base hosts several submarines capable of launching Trident missiles, which are armed with nuclear warheads.

"Nuclear weapons kill every day through our mining, production, testing, storage, and dumping, primarily on Indigenous Native land," the activists said in a statement read at the time of the arrest. "This weapons system is a cocked gun being held to the head of the planet."

In addition to banners reading "The ultimate logic of racism is genocide," a quote by Dr. Martin Luther King, "The ultimate logic of Trident is omnicide," and "Nuclear weapons: illegal — immoral," the activists also carried with them an "indictment" of "the United States government, President Donald Trump, Kings Bay Base Commander Brian Lepine, the nuclear triad, and specifically the Trident nuclear program" for war crimes.

In images released by the group, the anti-Trident banner, as well as crime scene tape, can be seen hanging in the base, while an activist spray paints peace slogans on the ground. One image shows the base's logo smeared in human blood, which the group brought in baby bottles.

Several of the activists are well known in the Catholic peace movement; Kelly has spent over 10 years of his life detained for similar protests, and Hennessey is the granddaughter of Catholic Worker Movement co-founder Dorothy Day. Patrick O'Neill is the founder the Fr. Charles Mulholland Catholic Worker House in North Carolina, and a longtime NCR contributor.

McAlister is also a longtime proponent of antiviolence and civil disobedience cases and a co-founder of the Jonah House in Baltimore. According to a book written by her daughter, Frida Berrigan, McAlister and her husband, the late Philip Berrigan, spent 11 years apart in detention during their marriage.

The Plowshares Movement is a Christian Pacifist movement that has staged similar protests in the past. The group takes its name from the book of Isaiah, which says of militaries throughout the world, "they shall beat their swords into plowshares," trading violence for a peaceful life.

The movement began in 1980, when eight activists broke into a General Electric plant in King of Prussia, Pennsylvania, where weapons were manufactured. After destroying weapons parts, pouring blood on the property, and causing nearly $30,000 of damage, they were arrested, beginning a movement and a long legal battle.

While the Plowshares Movement has no centralized governing body, actions have been ongoing since then; the Kings Bay group claims theirs was the latest of 100. In 2012, three activists, calling themselves the "Transform Now Plowshares," breached a nuclear facility in Tennessee and vandalized government property with blood and spray paint, exposing major security problems and forcing the plant to shut down for a time.

The Kings Bay activists are currently being held without bond at the Camden County Jail. According a Facebook post early afternoon April 5 by the Kings Bay Plowshares, "They are charged with criminal trespass, interference with government property and possession of tools to commit a crime."  Another Plowshares activist told NCR that the 7 were denied bond at a hearing the morning of April 6.  It is currently unknown when their next court date will be.