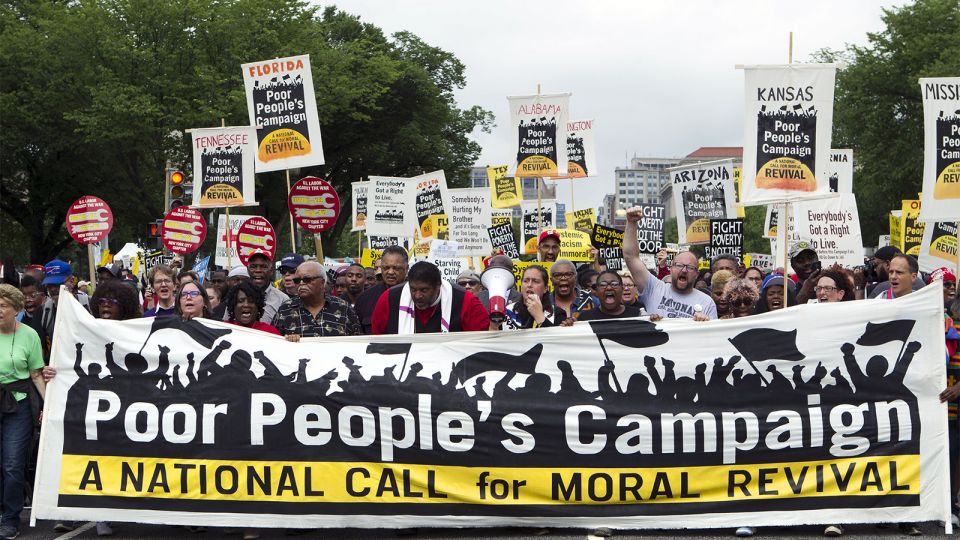 Demonstrators march outside the U.S. Capitol during the Poor People's Campaign rally at the National Mall in Washington on June 23, 2018. (AP/RNS/Jose Luis Magana)

Washington — A multiracial, intergenerational crowd of social justice activists, union workers and people of faith gathered on the National Mall over the weekend to get marching orders for their next steps in a new Poor People's Campaign.

Thousands of people prayed, cheered and listened intently as speakers called for a re-energized approach to fighting poverty and other social ills they say are plaguing the country. Organizers urged those who had traveled from as far away as Alaska and Alabama to raise their hands in a show of commitment to educating voters in the days ahead.

The Rev. William Barber II, co-chair of the Poor People's Campaign: A National Call for Moral Revival, set a serious tone for their Saturday (June 23) gathering and what he hopes will follow it.

"The problem in Capitol Hill is they don't listen and so we're not going to model that," said Barber as he shushed the crowd assembled under occasionally rainy skies, and asked for attention. "This is not fellowship. This is revolution."

The campaign is an echo of the one organized 50 years ago by the Rev. Martin Luther King Jr. that brought together a wide range of activists, including Jews and Christians, farmworkers and Appalachian poverty volunteers.

Where King focused on the "three evils" of racism, poverty and militarism, the new version has added environmental justice.

Kicking off on Mother's Day with rallies in cities across the United States and ending with the gathering on the Mall, the campaign's 40 days was intended to energize a similar interfaith effort on a host of mostly liberal causes.

"By God we have," said the Rev. Liz Theoharis, Barber's co-chair and a Presbyterian Church (USA) minister, referring to the campaign's aim of rallying activists for voting rights, homeless advocacy, equitable education and improved wages. "Just over the past 40 days, over the past few months, we have come together. There are state coordinating committees in 40 states across this country building the Poor People's Campaign."

Barber, a Christian Church (Disciples of Christ) minister known for his "Moral Mondays" rallies in North Carolina, said the campaign was nonpartisan but speakers decried Trump administration policies — especially its recent separation of migrant families at the U.S. border — among the lists of problems in the country.

Civil rights veteran Jesse Jackson, a leader of the original Poor People's Campaign, urged the granting of asylum for children and families that had been separated at the border and stressed the importance of Election Day.

"We have the power to take our nation back in November," said Jackson, as he asked the audience to repeat: "I can vote. I will vote. I must vote."

The Rev. Traci Blackmon, a member of the campaign's national steering committee and United Church of Christ justice leader, pointed to the Capitol as she advised people on how to continue organizing back home.

"We are not just here to march; we are here to mobilize," said Blackmon, the United Church of Christ's executive minister of justice. "November is coming and you're either with us or you are evicted from the house. We are marching now to serve notice: They have just a little while to get on board or find somewhere else to live."

The marchers delivered letters to Congress in which Barber and Theoharis cite the tens of millions of poor people in the U.S. with limited food, housing and utilities and the passage of new voter restrictions in 23 states since 2010.

"This is the true hacking of our democracy, allowing people to win office who then deny healthcare, living wages, cut necessary social programs and push policies that promote mass incarceration, hurt immigrants and devastate our environment," they wrote. "These racist laws hurt not just people of color, but poor whites whose lives are upended by the politicians put in office by extremist voter suppression."

Savannah Kinsey and Hope Koss, of Johnstown attend an Evangelical Lutheran Church in America congregation and have worked with Put People First PA!, seeking universal health care in their state, while Tree Muldrow's cause was the Coalition to Abolish Death by Incarceration.

"We all have similar needs and desires and we're learning that," said Muldrow, a "spiritual, God-believing" 66-year-old. "And we're bringing that back to our own people and we can show people how much we are connected. We all have the same needs. Poverty affects us all."

"We're doing this not out of this notion of hate for what is, but motivated by the love of God for what can be," she said.

Barber, who spoke at the cathedral during the campaign, has visited locations across the country since May, including a "toxic tour" sponsored by the Illinois branch of the campaign that highlighted ecological devastation in poor neighborhoods in Chicago affected by a toxic metal that has been linked to lower IQ scores in children.

The Rev. Betty Landis, an interim minister at an ELCA congregation in Chicago, and her husband Darryl Jones, joined Barber's tour and other direct-action events in Illinois, including a protest against ecological devastation at the capital in Springfield where Landis was arrested. She has a court date in August.

"It was absolutely worth it," said Landis, one of more than 2,000 people who were arrested in 37 states over the 40-day campaign during activities that involved civil disobedience. "As of now, it is what I feel called to do."

Retired social worker Lou Seyler of Newport News, Va., used similar language as he marched and made plans to support the campaign financially after watching Barber in a recently televised congressional hearing.

"I'm just called by Rev. Barber's moral crusade," said Seyler, who has previously helped refugee children in Texas and visited incarcerated people. "And it's time that we really have a breath of unbiased air, unracialized discussion about poverty and incarceration."

Some experts, even those supportive of the campaign's goals, say it could be a struggle to keep the  campaign going.

"The test going forward will be whether this momentum can be sustained and further incorporated into broader organizational and community-based coalitions," said R. Drew Smith, a professor of urban ministry at Pittsburgh Theological Seminary and an expert on religion and social movements.

But before the demonstrators reached the Capitol, some, including those who were not around 50 years ago for King's version, said they are ready to stick with the campaign's goals.

Felisa Concepcion, a policy research associate headed to graduate school, said she hopes to start a social justice organization after seeing the limited resources for the poor in Sacramento, Calif., where she grew up. She's protested with Black Lives Matter and movements to help young undocumented people but said she will probably follow the new campaign "wherever it goes."

"It intersects with religion, gender, sexuality race," said the 24-year-old who was raised Catholic but now is "spiritual" with "my own connection with God." "A lot of that doesn't happen with other rallies or other protests or other campaigns."