The priest at the center 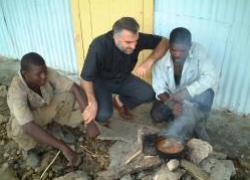 “All roads lead to Fr. Hartley,” said attorney Benjamin Chew. “He is the source of these reports.” Though he is not named as a defendant in the defamation lawsuit Chew’s firm has brought against the makers of “The Price of Sugar,” Fr. Christopher Hartley is central to the case made in that documentary.

It is an unlikely starring role for this priest, whose father was a wealthy Englishman and whose mother is a Spanish aristocrat. His path to the sugar fields of the Dominican Republic is as unlikely as that to priesthood. During an extensive interview June 7 at a Carmelite Monastery in Brooklyn, N.Y., Hartley, who was returning the next day to Ethiopia, described himself as a theological and ecclesiastical conservative who ultimately found himself at odds with church authorities and the sugar entrepreneurs because of his concern for the human rights of his parishioners.

His path to priesthood began as a 15-year-old when, feeling a certain emptiness despite his privileged life, he announced to his befuddled father, an Anglican, that he wanted to become a Catholic priest. It was an announcement that his father would quickly refer to his mother, a Catholic. Hartley remembers the day clearly -- March 8, 1974. He decided to attend seminary in Toledo, Spain, rather than in Madrid where he lived, because the former was more rigorous and disciplined and more to the liking of a fervent teenager who wanted to “devote my life radically to Christ.”

The second year of seminary his father gave him a book about Mother Teresa of Calcutta as a Christmas gift. The book changed his life. He began to volunteer “every spare minute I had,” first with her Sisters of Charity in London, where he met the famous nun in 1977. “And when I met that woman, just looked at that woman, I said, ‘I want to work with her. I want to be with her.’ ” He helped the order open a house in Madrid and later worked summers in Calcutta with the dying. He was ordained in Rome in 1982 by Pope John Paul II.

It was Mother Teresa who persuaded Hartley to go to New York, where he worked in the South Bronx at different parishes for eight years. Cardinal John O’Connor sent him to do a doctorate in theology in the Gregorian University in Rome from 1992 to 1995. Earlier the cardinal, even before Hartley was officially a priest of the diocese, had given him a job in the archdiocesan vocations office to reach out to the Spanish-speaking population. When Hartley returned from Rome, he was appointed pastor of Old St. Patrick’s Cathedral, a spot that traditionally is indicative of a certain upward mobility in the clerical ranks.

At that point, as Hartley explains it, two forces converged to impede his ascent. He came to the conclusion, over an extended period of discernment, that “ecclesiastical ambition is priestly suicide” and a friend from seminary, who had been pestering him to join him in the missions, told him that a parish next to his in the Dominican Republic had an opening.

By this point, Hartley and O’Connor “had a very close relationship,” according to Joe Zwilling, longtime spokesman for the archdiocese. The priest considered the cardinal a mentor and father figure. He knew of the clerical chitchat that had him on a track to higher office. He went to O’Connor with his desire to go to the Dominican Republic, half hoping that the cardinal would deny his wish. He said in the June 7 interview that he had been “playing games with God” at that point in his life, feeling the pull toward missions yet hoping to hear the cardinal say he had other plans for him so that he would have a rationale to continue a comfortable life. And that is precisely what O’Connor said at first: “I had other plans for you.” He added, however, according to Hartley’s recollection, “But way and above my own plans are the plans of God. If you feel called to this, this is something you need to solve.” O’Connor told him to try it for a year to see what he thought. Hartley went and returned to seek permission to stay for another year, 1998-99.

In 1999 O’Connor came down with brain cancer. When Hartley went to renew his permission that year, the cardinal was bedridden. The priest asked for a four-year extension, and it was granted. He spent nearly nine years in the Dominican Republic before being forced to resign his pastorate.

In the Dominican Republic, Hartley said, his life was transformed yet again by his experience of the poverty and horrid living conditions of many of the people in his parish. He became an activist on behalf of the Haitians living in squalor in the bateys and eking out an existence in the sugar fields. He advocated for what he called the invisible children, disenfranchised because they lacked citizenship papers and birth certificates.

In the documentary “The Price of Sugar,” it appears his work is backed up by Bishop Francisco Ozoria Acosta of the San Pedro de Macoris diocese. In fact, in one scene, after Hartley had been especially provocative, the bishop is seen telling the media that Hartley’s advocacy was not just the work of one man, but the work of the church.

But in September 2006, the bishop sent him a letter giving him 15 days to leave the parish of San José de los Llanos, which had gone for seven years without a priest prior to Hartley’s arrival. The reason for his dismissal can appear confusing. Hartley said in the interview with NCR initially that it was because his father was seriously ill (he later died). But he also warned about charges that existed that would deflect from the central issue of the human rights of Haitian workers, though he refused to be specific.

In a personal letter from Ozoria Acosta to Hartley, among the filings submitted as part of the case by Vicini lawyers, the bishop is far more blunt and revealing about his relationship with Hartley.

The bishop wrote that he was “always convinced that I could not be your bishop,” and for that reason had not allowed Hartley to be incardinated or officially made a priest of the diocese.

He then raised the specter of “deplorable things” that “have taken place. Things that are impossible to believe, actions that are inadmissible for a priest. Truly, I am stunned and shocked, because I always believed in the depth of your spiritual life.”

According to the Vicini lawyers, the “deplorable things” turned out to be disparaging comments that Hartley made about a potential bishop candidate in the diocese. The comments, a transcript of which were provided to NCR, had apparently been tape-recorded by Hartley as he spoke long distance with a minor official at the Vatican. The tape found its way to the bishop. In that conversation, the priest discusses another cleric’s skepticism about whether the bishop actually wrote the letter he had received notifying him of his dismissal as pastor. He also claims that election of the candidate, unnamed in the portion of the transcript available, “would really be a tragedy for this country.” The two discuss possibilities for blocking such an appointment and discuss internal church politics in the Dominican Republic.

The comments seem to contradict Hartley’s contention, strongly made during the NCR interview, that he is not one to publicly criticize church leaders. And the lawyers for the Vicinis see it as a reason to question his credibility. They also note that Hartley, in a visit to Washington, refused to accept a subpoena to testify that someone attempted to serve him on the street. He signed a sworn statement saying he was not served with a subpoena. Joseph Johns, the CNN correspondent who was with Hartley at that time, signed a sworn statement contradicting the priest.

By press time NCR had received no response to questions for Ozoria Acosta that had been sent to the diocesan e-mail address. Johns declined a request for an interview. Attempts to speak with Archbishop Timothy Broglio were also unsuccessful. An aide said the archbishop, an American who was nuncio to the Dominican Republic at the time of the events involving Hartley and who is now head of the Military Archdiocese in the United States, was busy traveling and did not have time to take questions.

Justice | The priest at the center

Different peoples and the Gospel