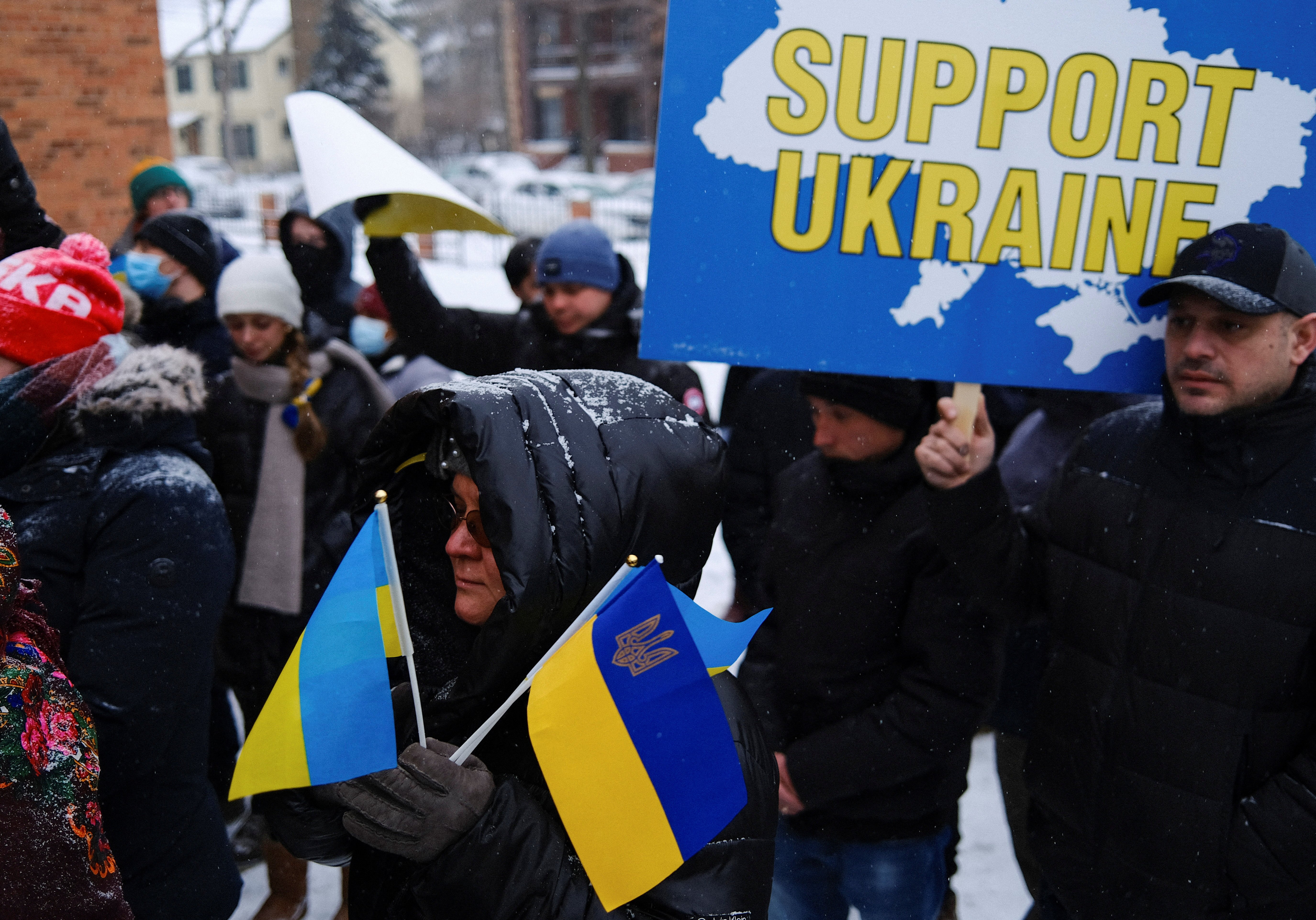 WASHINGTON —  For some U.S. prelates, such as Bishop Robert J. Brennan of Brooklyn, New York, the Feb. 24 news of Russia's invasion of Ukraine hit close to home.

As he began the homily for the first Mass of the day at the Co-Cathedral of St. Joseph in Prospect Heights in Brooklyn, Ukraine was on his mind.

He offered the day's prayers, not only for those in Ukraine, he said, but also "for people from our own diocese here in Brooklyn, from the Ukrainian community, we join with them."

U.S. bishops, like much of the world, focused on the East European nation Feb. 24. Some condemned the actions of Russia, others expressed worry about the consequences on civilians and what the future brings. Though messages differed,  they seemed to be largely united behind Ukraine.

Archbishop José H. Gomez of Los Angeles, president of the U.S. Conference of Catholic Bishops, in a Feb. 24 statement on behalf of the country's bishops, encouraged Catholics to join Pope Francis' call to prayer and fasting to bring an end to the conflict.

"In times of trouble, we call on the tender mercy of God ... to guide our feet to the way of peace," he said, recalling words from the Gospel of Luke. "May our prayers, joined with those of people around the world, help guide those waging war to end the meaningless suffering and restore peace. Our Lady, Queen of Peace, pray for us."

On March 2, Ash Wednesday, most dioceses will take up the USCCB's the Collection for the Church in Central and Eastern Europe, which includes Ukraine.

By and large, prelates took to Twitter to express themselves.

"Let us pray for the people of Ukraine as the guns of war approach," tweeted Bishop Joseph E. Strickland of Tyler, Texas. "Men, women, children and families will suffer as this unfolds and most will be powerless. Let us pray that their neighbors will support them and that this violence will end quickly. Let us pray."

Like Bishop Strickland, some conveyed their concerns for the well-being of civilians; others offered solidarity; and some seemed to condemn Russian President Vladimir Putin's actions.

"Pray for peace in Ukraine. Pray for the conversion of leaders that abuse people's rights," tweeted Archbishop Gustavo García-Siller of San Antonio. "There are individuals that are about control and sickness. Let's pray for them too. A rosary helps."

Bishop Joseph C. Bambera of Scranton, Pennsylvania, spoke of Ukrainians as they "confront forces that challenge their freedom, security and peace."

Bishop Michael J. Sis of San Angelo, Texas, called for the respect of human rights, as well as for Ukrainians as they "see their homeland become a war zone," he tweeted.

Bishop Paul J. Bradley of Kalamazoo, Michigan, tweeted that as the world awakened to the reality of war, "may the world truly 'awaken' to the evil of all war, and the sinfulness of violent aggression."

Some, like Auxiliary Bishop Mark W. O'Connell of Boston, retweeted a poignant screenshot of a group kneeling in prayer on a street in Ukraine after being invaded by Russia.

"I join my prayers to the prayers of the people of Ukraine," the bishop tweeted above the image.

Almost all directed their dioceses to the Catholic Church's teachings on peace.

Cardinal Joseph W. Tobin of Newark, New Jersey, said that "we must always reject war as a political solution and propose honest and respectful dialogue among nations as the only way forward."

Cardinal Blase J. Cupich of Chicago tweeted that he had requested prayers for peace in Ukraine be added to all Masses in the Illinois archdiocese.

"Most of us know war in Europe from the stories of our parents and grandparents, from history portrayed in films and books," he said. "This attack on a peaceful, sovereign nation is a sad reminder that the work of peace is never over.

"Please pray with me for the safety of all now under fire and for those in other nations fearful the war in Ukraine may overspread their borders."

Before his final blessing at the morning Mass in Brooklyn, Bishop Brennan, too, asked for prayers so that the situation "does not escalate."

"We just intensify our prayers because, quite honestly, that's who we are," he said. "We turn to the Lord and we show that dependence, as a light to the world, as salt to the earth."