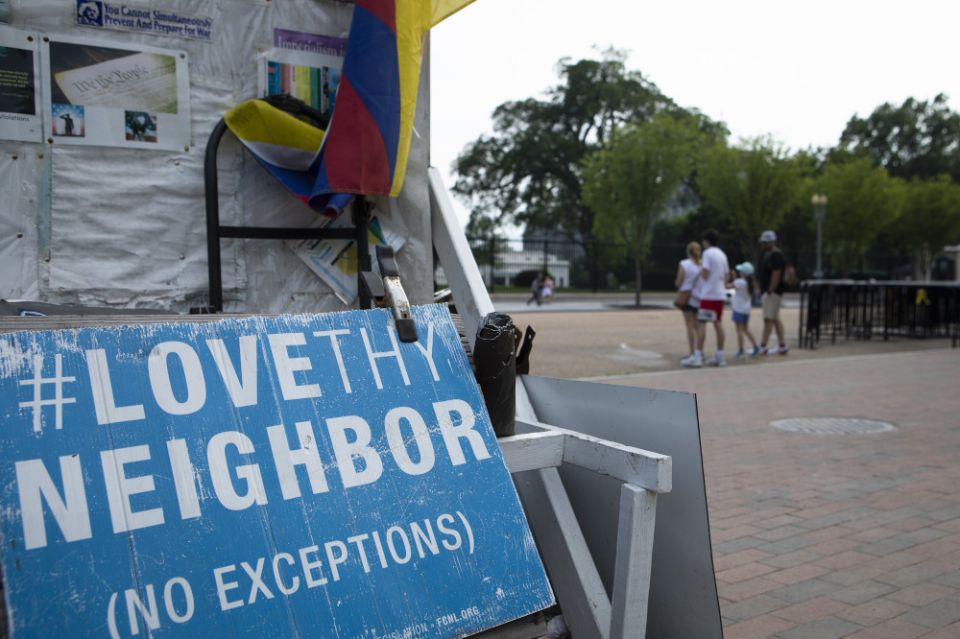 A "Love Thy Neighbor: No Exceptions" sign is seen near the White House in Washington July 7. (CNS/Tyler Orsburn)

Washington — The call to end a U.S. policy that keeps migrants out because of COVID-19 fears has been a constant rallying cry among immigrant advocate circles this summer.

Though it seems as if the heat and pressure mounting on the Biden administration to end it may be having some effect, advocates also fear restrictions may stay in place for some — at least for a while longer.

During a July 7 teleconference call organized by Welcome with Dignity, a coalition of groups that support migrants, speakers worried that only families will soon be exempt from the policy known as Title 42.

The Trump administration began using the policy in March 2020 as knowledge of rising infections of the coronavirus began to surge in the U.S. — and around the world.

U.S. Customs and Border Protection on its website said the "prohibition on the introduction of persons or property, in whole or in part, from Mexico and Canada is required in the interest of public health." Border Patrol agents were instructed to expel anyone caught trying to illegally enter the U.S. instead of processing them under existing immigration law.

The order, the agency says, prohibits "the entry of certain persons who potentially pose a health risk, either by virtue of being subject to previously announced travel restrictions or because they unlawfully entered the country to bypass health screening measures."

Figures posted as of June 9 on the department's website estimate almost 667,000 expulsions under Title 42 took place during the federal government's 2021 fiscal year. Almost since it went into place, however, the rule has been fervently opposed by immigrant advocates who viewed it as an excuse to further restrict immigration by the Trump administration.

"We knew from the very beginning that the use of Title 42 was only about the Trump administration's war on immigration, not about health or safety," said U.S. Rep. Judy Chu, D-California, during the July 7 teleconference. "Unsubstantiated claims and unscientific justifications were used as grounds for cruelty against people born outside this country."

However, when the Biden administration took over Jan. 20, officials moved to quickly reverse other immigration policies from the Trump era on Inauguration Day, but Title 42 remained. Since then, government officials have largely kept quiet about it.

"We knew from the very beginning that the use of Title 42 was only about the Trump administration's war on immigration, not about health or safety."

Reports say that parents migrating with children soon may be the only ones not subject to the rule, but immigrant advocates say that by extending the policy and keeping out other adults traveling without children, the Biden administration puts people who already have been victimized in a dangerous situation.

"This plan would prolong disparities" when it comes to protection of asylum-seekers, said the Hope Border Institute, a nonprofit in El Paso, Texas, which on July 8 released a report, jointly with Human Rights First, on the dangers faced by asylum-seekers left to perish in dangerous border towns under policies such as Title 42.

The report "Disorderly and Inhumane: Biden Administration Continues to Expel Asylum-Seekers to Danger While U.S. Border Communities Stand Ready to Welcome" focuses on the impact of Title 42 expulsions in the El Paso-Ciudad Juárez, Mexico, region.

"People who've been threatened should never be rejected," said Jacqueline Flores, a Salvadoran immigrant who participated in the July 7 conference call and whose aunt and a cousin have been kept out of the U.S. because of Title 42. "I plead with President (Joe) Biden."

Chu, along with Kennji Kizuka, associate director for research and refugee protection for Human Rights First, spoke of the assaults, rape and even murder of migrants who are stranded in border cities and who have become targets for criminals preying on their vulnerability.

"We remain highly concerned by reports of the Biden administration continuing this unlawful policy to block and expel single adults. This is illegal," Kizuka said. "Single adults face no less violence being blocked (from entering the U.S.) and expelled to Mexico than being expelled to their country. There's no reason to suspect there will be less violence against single adults." 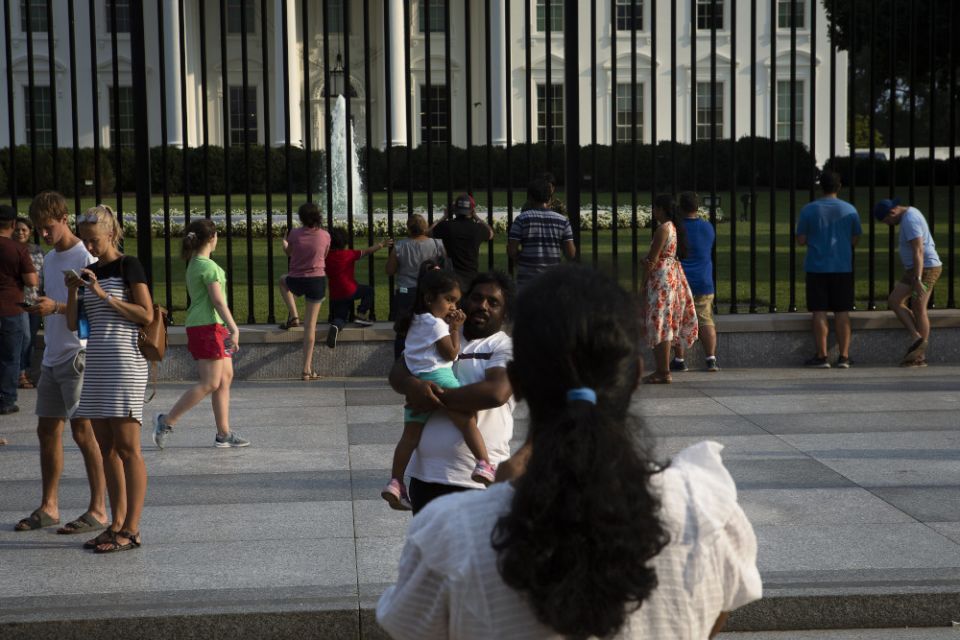 People are seen near the White House in Washington July 7. (CNS/Tyler Orsburn)

Chu said that while efforts to allow families into the country are appreciated, others who are vulnerable will continue to be denied international human rights protections.

"We recognize the new administration's efforts to change course, but this is just a start," Chu said. "A piecemeal approach will continue to inflict harm."

Some U.S. bishops and Catholic organizations also have continuously called for an end to the rule — including petitioning the Biden administration at the highest levels.

When El Paso Bishop Mark Seitz met with Vice President Kamala Harris during her June 25 visit to the border, he told her to "hear the voices of those turned away at the border under Title 42."

"Their tears should shock our national conscience," Seitz said. "We must restore the right to asylum at the border with a plan to receive asylum-seekers worthy of our country's highest ideals and commitments."

A day earlier, Washington Auxiliary Bishop Mario Dorsonville, chair of the U.S. Conference of Catholic Bishops' migration committee, also called on the government to end "the misuse of Title 42 to turn away vulnerable asylum-seekers."

"We must restore the right to asylum at the border with a plan to receive asylum-seekers worthy of our country's highest ideals and commitments."

Dr. Michele Heisler, medical director for Physicians for Human Rights, a signatory on a letter sent in July to Secretary Xavier Becerra of the Department of Health and Human Services and the Centers for Disease Control director, Dr. Rochelle Walensky, on the Title 42 Order, also took part in the teleconference call.

She said there had been hope for science-based policies under the Biden administration but blocking adults without children from entering "continues to make absolutely no sense."

But keeping or doing away with the rule proves to be a no-win situation for an administration thinking ahead to the 2022 midterms.

If the rule is completely rescinded, it is likely to lead to rising numbers of migrants trying to enter at the southern border, which many U.S. voters are not happy about.

A recent poll by the National Republican Senate Committee and the Republican Governors Association showed that 53% of voters said they would be "less likely" to support Democratic candidates for Congress in the midterms because of "the recent surge of illegal immigrants at our southern border."

And 56% said they blamed the president for an "increased amount of illegal immigration" that they believe resulted from eliminating "tough Trump policies with regard to immigration."

Justice | An unpopular immigration policy may end, but not for all