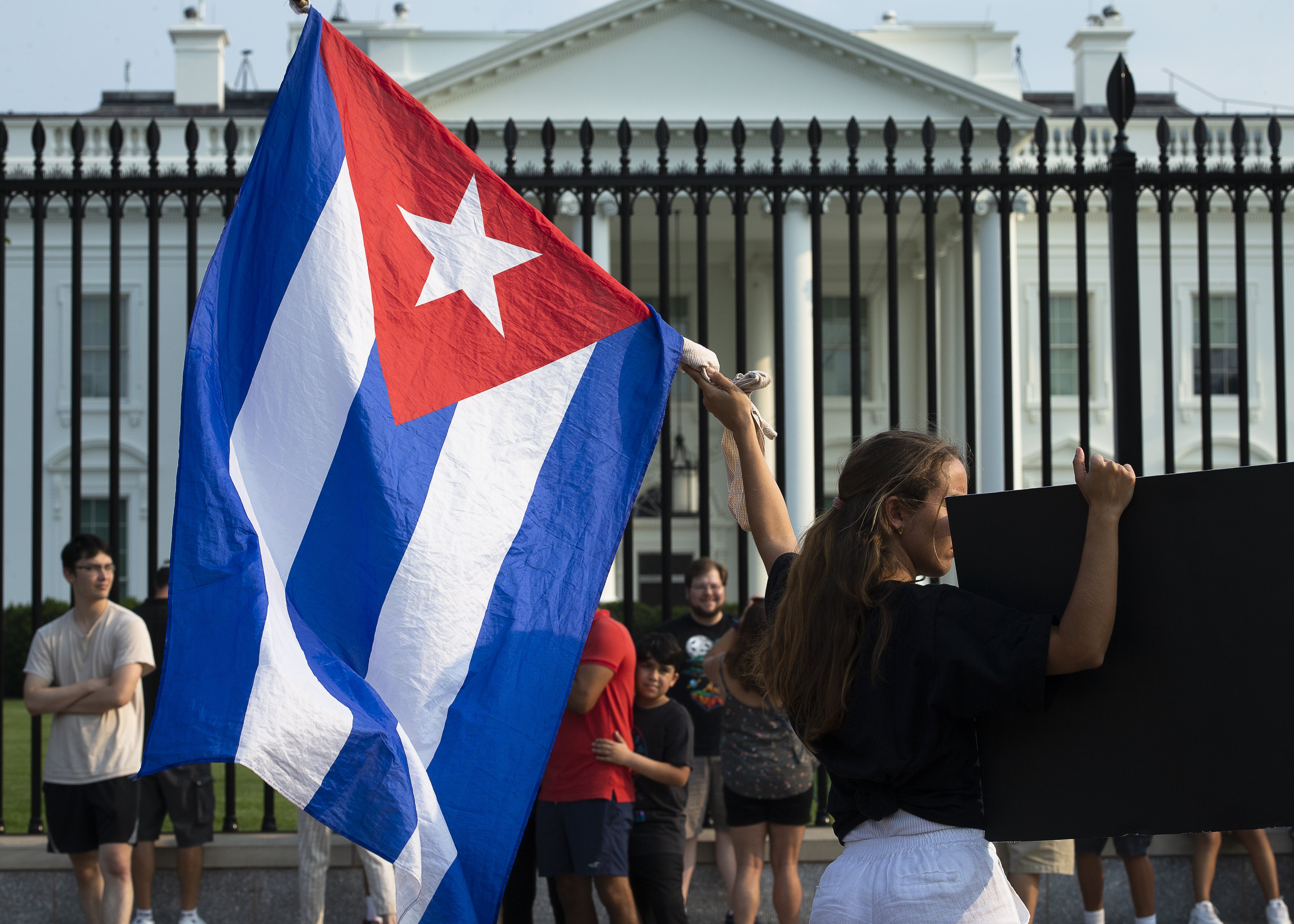 People in Washington demonstrate near the White House July 19, 2021, following July 11 protests in Cuba against the government and a deteriorating economy. (CNS photo by Tyler Orsburn)

The president of the U.S. Conference of Catholic Bishops and the chairman of the USCCB's international policy committee expressed their solidarity and that of all the U.S. bishops "with our brothers in the Cuban episcopate, and with all men and women of goodwill in Cuba."

Released late July 19, the statement acknowledged "the ongoing protests in Cuba and among the diaspora in the United States."

It was jointly issued by Archbishop José H. Gomez of Los Angeles, USCCB president, and Bishop David J. Malloy of Rockford, chairman of the USCCB's Committee on International Justice and Peace.

"As the Cuban bishops declared in their July 12 statement, 'A favorable solution will not be reached by impositions, nor by calling for confrontation, but through mutual listening, where common agreements are sought and concrete and tangible steps are taken that contribute, with the contribution of all Cubans without exception, to the building-up of the Fatherland,'" the two U.S. prelates said.

"In the same spirit as the Cuban bishops, we urge the United States to seek the peace that comes from reconciliation and concord between our countries," Archbishop Gomez and Bishop Malloy said.

Thousands of Cubans in Havana and in 14 other Cuban cities took to the streets July 11 to protest economic hardships, lack of basic freedoms and the Cuban government's handling of the coronavirus outbreak, making for what some have described as the most significant unrest in decades.

They were mirrored by a vocal street protest in Miami's Little Havana neighborhood late afternoon July 11. Protests are ongoing in Cuba and in the U.S.

Since July 11, the Cuban government reportedly has responded by arresting people, including clergy, not only on the streets but also in their homes. There was at least one confirmed death after police shot a man taking part in the anti-government protest. The government also has restricted internet and phone services.

Archbishop Gomez and Bishop Malloy said that for decades the USCCB, "in conjunction with the Holy See and the Cuban bishops, has called for robust cultural and commercial engagement between the United States and Cuba as the means to assist the island in achieving greater prosperity and social transformation."

"We pray that Our Lady of Charity, our mother, watches over her children in Cuba, and that, together, our countries can grow in friendship in the interests of justice and peace," they said.

On July 20, The Wall Street Journal reported: "The whereabouts of hundreds of arrested demonstrators is unknown and others are being held incommunicado without charges nine days after nationwide demonstrations rocked the Caribbean nation."

"More than a week after the unprecedented demonstrations, hundreds of people are lining up outside police stations across the island asking about missing relatives," the newspaper said.