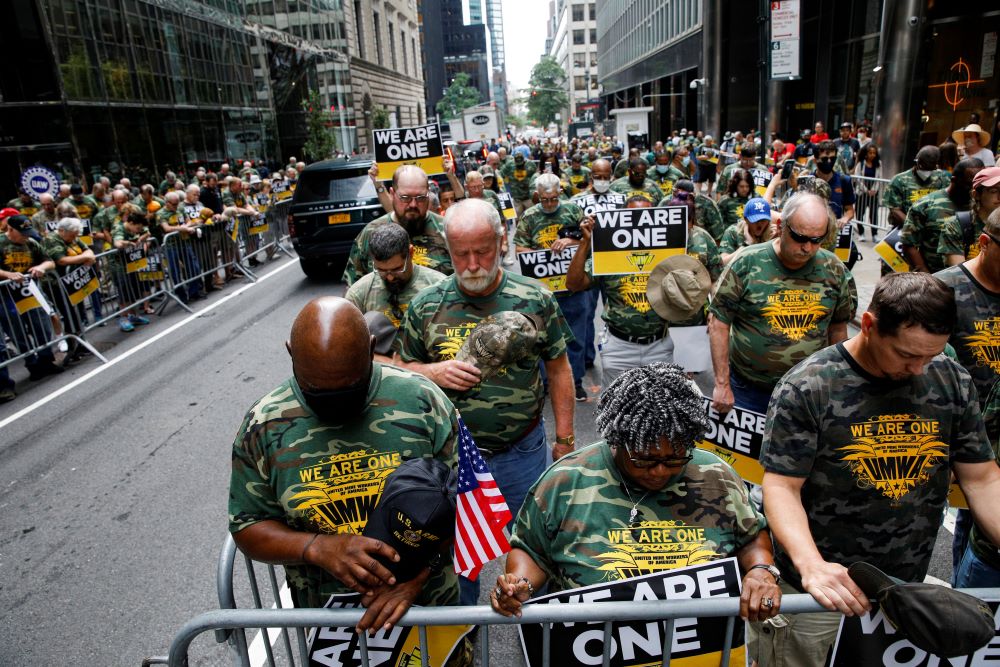 Members of United Mine Workers of America and other labor leaders bow in prayer while picketing July 28, 2021, outside BlackRock's headquarters in New York City as part of the union's strike at Warrior Met Coal Mine. (CNS/Reuters/Brendan McDermid)

When Leo Mendoza's parents got COVID-19, both had to go without pay while they recovered. His father, who drives pilots and airline crews in Los Angeles to and from the airport to their hotel, and his mother, who packages lunches served at public schools, are both immigrants from Mexico who came to the United States with the hopes of working and providing for their family. Yet during the pandemic, Mendoza's father was expected to come to work even while he was sick.

Millions of Americans are protesting work conditions by leaving their current jobs as part of what is being called the "Great Resignation." While the Mendozas have not left their jobs yet, they say they are frustrated with how they were treated during the pandemic and are beginning to consider their options.

What does the church have to say about this? Not only has Catholic social teaching emphasized that Catholics are called to treat workers with dignity and respect, but the church's long support for labor unions may offer a Catholic response to "the Great Resignation."

"I think in many ways, we're in the middle of a slow moving general strike in which millions of workers are no longer willing to accept the kind of low-wage, no-benefit jobs that have left them feeling so burned out and insecure,” said Lane Windham, associate director at Kalmanovitz Initiative for Labor and the Working Poor at Georgetown and co-director of WILL Empower (Women Innovating Labor Leadership).

Windham, who has spent 20 years working in the union movement, thinks the U.S. is not experiencing a labor shortage, but rather a wage and worker rights shortage.

Unions can offer an alternative to resignation, said Clayton Sinyai, executive director of the Catholic Labor Network, "What they offer you is a voice in the workplace where you are, and you don't have to leave. Unionized workplaces tend to be more stable," he told NCR.

Sinyai said this economic moment could provide a gift for a country where union membership is rather low — about 10%, according to the U.S. Bureau of Labor Statistics.

Both the recent wave of worker strikes and the explosion of resignations exemplify the ways unionizing a workplace can address issues around fair treatment of workers, he said.

As a graduate student at Loyola Marymount University and a senior administrative coordinator at Huffington Ecumenical Institute, Leo Mendoza has been able to work and study from home during the pandemic, but his parents have not. His father has no formal education since leaving Mexico and has had to work in manual labor jobs. As his dad approaches 60, Mendoza wonders how long he can work in these fields.

A living wage and dignified employment should not be a privilege for only those who received higher education, said Leo. "It should apply to everybody."

"What gives me hope at this moment is seeing the tremendous amount of solidarity that people are starting to have with others that normally wouldn't get considered or given the time of day, like for example, essential workers," he said.

Unions could protect essential workers like the Mendozas as well as undocumented workers, labor experts said.

Juan L. Belman Guerrero, director of student programming at Kalmanovitz Initiative for Labor and the Working Poor, works at the intersection of labor rights and Catholicism.

In 2011, Belman's dad was working in construction when he was pulled over on his way home from work and threatened with deportation. After that, Belman Guerrero decided he wanted to dedicate himself to knowing more about the working rights of immigrants in the US.

"For myself, I remember growing up I didn't know much about unions. It's a matter of having the right information and making sure that workers and Latinos know what their rights are," he told NCR.

Immigrants often are reluctant to speak out against employers because of their undocumented status, even if the working conditions are undignified, Belman said. 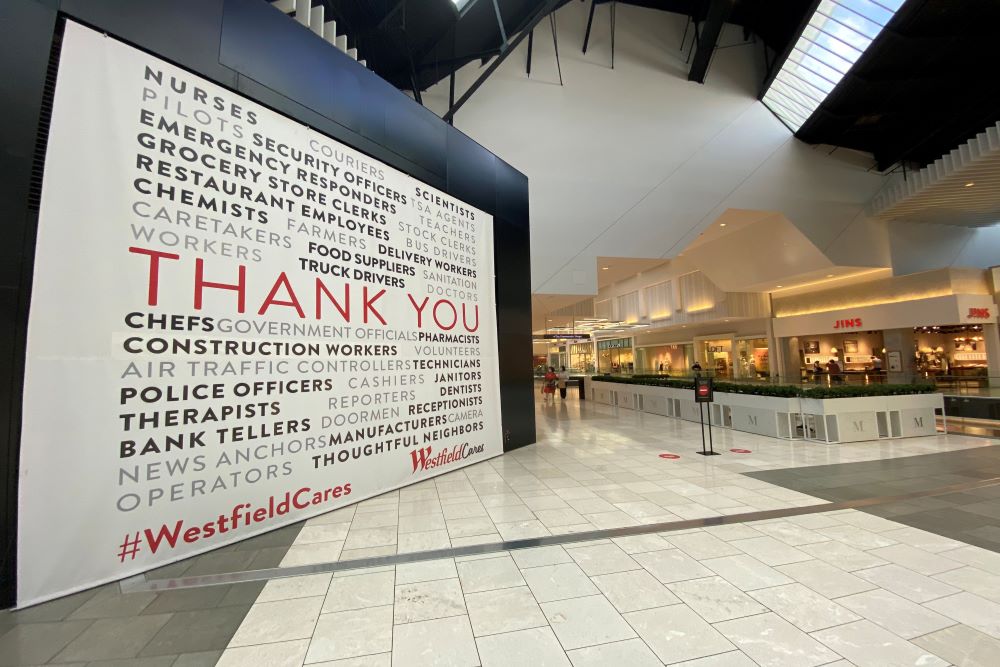 A sign at the Westfield Santa Anita mall in Arcadia, Calif., thanks first responders and essential workers June 25, 2020. (CNS/Reuters/Mario Anzuoni)

Regardless of immigration status, workers deserve a living wage, he said, especially essential workers who put themselves and their families at risk during the pandemic.

Belman urges Catholic politicians to support legislation that provides protection for workers trying to organize, such as the PRO Act, as well as immigration reform.

Exploitive work situations not only impact the worker, but the whole family unit, which Catholics are called to protect, labor experts said.

Sinyai believes it is time for Catholics to dream of a society and economy that is more consistent with the demands of justice, including a living wage and dignified benefits that allow workers to support their families and have paid time off with family.

Windham emphasized the unions are a way for Catholics to live out Catholic social teaching.

“Catholic social teaching has long supported all people's right to engage collectively and to be part of a union, and our current pope has made that all the more clear," she said.

Now people of faith must listen to what workers are saying, she said.

"And what they are saying is the way things are, the bad jobs we've been having for 30 years, the bad pay, the horrible hours, the no child care, it's not working for us," she said. "And then you throw a pandemic on top of it and ask people to risk their livelihood and they're just not going to do it."

A version of this story appeared in the Feb 4-17, 2022 print issue under the headline: Catholics respond to the 'Great Resignation'.