What's behind the way we eat 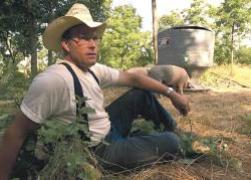 Joel Salatin, owner of Polyface Farm in Virginia, talks about his farming practices in the documentary "Food, Inc." (Photo courtesy of Magnolia Pictures)

The U.S. food supply is controlled now by a handful of corporations that put profit ahead of food safety, the livelihood of farmers, the safety of workers and the environment, according to a new documentary, “Food, Inc.” The film investigates the unintended consequences and hidden costs of our current system of producing food.

This new exposé of our food-producing system is especially significant because it draws together the system’s many diverse elements in entertaining and informative ways and will be widely distributed in local theaters throughout the summer months. Its producers are hopeful the documentary will rattle the industry and shake up complacent consumers.

We have chickens with huge breasts, the perfect slab of ribs, insecticide-resistant, genetically engineered soybeans, even tomatoes that never spoil, yet we also have new strains of harmful bacteria that cause illnesses for an estimated 73,000 annually and spur meat and vegetable recalls that make headlines on a regular basis.

As “Food, Inc.” makes clear, the key weapon employed by big agribusiness and its allies is consumer ignorance. The consumer, who enjoys deceptively low prices, must see through a fraudulent veil to figure out just where their food is coming from, who makes it, and what the producers’ business practices involve.

The documentary features narration by investigative journalists Eric Schlosser, author of Fast Food Nation: The Dark Side of the All-American Meal, and Michael Pollan, author of The Omnivore’s Dilemma: A Natural History of Four Meals, along with local food entrepreneurs like Stonyfield Farm’s Gary Hirshberg and Polyface Farm’s Joel Salatin, who are finding ways to work inside and outside the system to improve food quality while using humane practices with animals.

“Food, Inc.” was the brainchild of Schlosser and director/producer Robert Kenner.

As the camera glides over the colorfully packaged edibles displayed at the typical U.S. food emporium, Schlosser narrates: “The way we eat has changed more in the last 50 years than in the previous 10,000, but the images used to sell the food are the picket fence, the silo, the 1930s farmhouse and green grass.

“It’s spinning a pastoral fantasy. There are no seasons in the supermarket. There are no bones anymore in the meat aisle. This is a deliberate veil drawn between what we eat and how it’s produced. If you follow the trail back you will find not farmers and ranchers but enormous assembly lines where both the animals and the workers are abused.”

It started with the fast food industry in the 1960s when a factory system was introduced to the back of the restaurant, replacing the local entrepreneurship of mom- and-pop diners and local restaurants. “They taught workers to do the same thing over and over so they could pay them lower wages,” Schlosser says.

Far-reaching consequences result from this system. “Big fast food chains want big suppliers that produce a lot of meat efficiently and cheaply. So now a handful of companies control all food production.”

Tyson Foods, for example, is the biggest meat producer in the history of the world. “They redesigned the chicken so that they have huge breasts to satisfy desire for boneless white meat. Tyson owns the birds from day they are hatched to day they are slaughtered.”

The filmmakers interview a farmer who contracts with Tyson, Carole Morison. As she enters the large chicken-raising facility on her farm she observes: “It’s nasty in the coop; there’re dust and feces everywhere. This isn’t farming; it’s mass production. Companies keep farmers under their thumb with the huge debt involved in getting started. The farmer has no say in business decisions. It’s like being a slave to the company.”

Tyson and Perdue occupy 80 percent of the chicken market. They control the supply and set the rules for smaller meat farmers. The animals are genetically modified, live in tightly packed sheds in complete darkness, stand in a community pool of stool, and ingest quantities of antibiotics constantly.

The film takes us to the largest killing floor in the world in Tar Heel, N.C., a Smithfield Pork facility, where 32,000 hogs per day are slaughtered. Most of the labor is with illegal immigrants, with occasional raids on their company-sponsored sheds to give the appearance of adherence to labor laws.

We also journey to a sprawling beef feedlot, where squeamish viewers will want to avert their eyes. Because of the horrid conditions there, meat is often contaminated despite the antibiotics, so a filler material has been designed that is filtered through ammonia that will, the processors hope, make the ground meat safe to eat despite the presence of E. coli.

Not only are few companies involved but also few crops. “So much of a supermarket’s variety turns out to be just clever rearrangements of corn,” according to Pollan. “A hundred years ago a farmer produced 20 bushels an acre; now 200 is no problem. Big grain-trading companies like Cargill and Archer Daniels Midland lobby Congress to give us the farm bills we get nowadays that favor corn production, then they find uses for it.”

Most processed food now contains some variety of high fructose corn syrup or some other additive derived from corn. Plus corn can be fed to animals, even fish, in products like tilapia and farmed salmon.

A spider web of railroad tracks crisscrosses the nation moving corn to feedlots. “We feed cattle corn because it fattens them quickly,” Pollan says, “but that high corn diet leads to production of ever new strains of E. coli. Their bodies are not designed to digest corn. ”

Pollan sums up: “The idea that you’d have to write a book about where our food comes from is a sign of how bad things are.”

All this happens under the noses of regulatory agencies, the U.S. Department of Agriculture and the Food and Drug Administration. The film shows the “revolving door” of executives from giant food companies in and out of Washington.

Holy Cross Br. David Andrews, former director of the National Catholic Rural Life Conference, now working for the Washington consumer organization Food and Water Watch, told NCR: “It takes a lot of effort to lift the veil. ‘Food, Inc.’ does it successfully, so much so that the industry fights back now with their own Web sites countering it.

“While making the film,” director Kenner said, “I met a cattle rancher who told me ‘You know, we used to be scared of the Soviet Union or we used to think we were so much better than them because we had many places to buy things, and choices. We thought if we were ever taken over, we’d be dominated, we’d have to buy from one company, and that’s not the American way. You look around now, and there’s one or two companies dominating everything. We’ve become what we were always terrified of.’

“It seems so un-American that we would be dominated and intimidated by these companies.”

Salatin, owner of Polyface Farm in Virginia, where he lets his livestock graze on grass rather than being force-fed corn in a feedlot, chats amiably in the film about a possible future direction for our food policies and practices.

“Imagine what it would be if, as a national policy, we said we’d be only successful if we had fewer people going to the hospital next year than last year? The idea then would be to have such nutritionally dense, unadulterated food that people who ate it actually felt better, had more energy and weren’t sick as much. That’s a noble goal.”

Rich Heffern is an NCR staff writer. His e-mail address is rheffern@ncronline.org.

On the Web
How to find local, sustainably-raised food and humanely raised meats learn more about factory farming of animals:

Local Harvest
www.localharvest.org
Use their website to find farmers’ markets, family farms, and other sources of sustainably grown food in your area. You can locate produce, grass-fed meats, and many other kinds of good food that is sustainably raised and grown.

Justice | What's behind the way we eat

Working group urges UN to step up the fight against homelessness