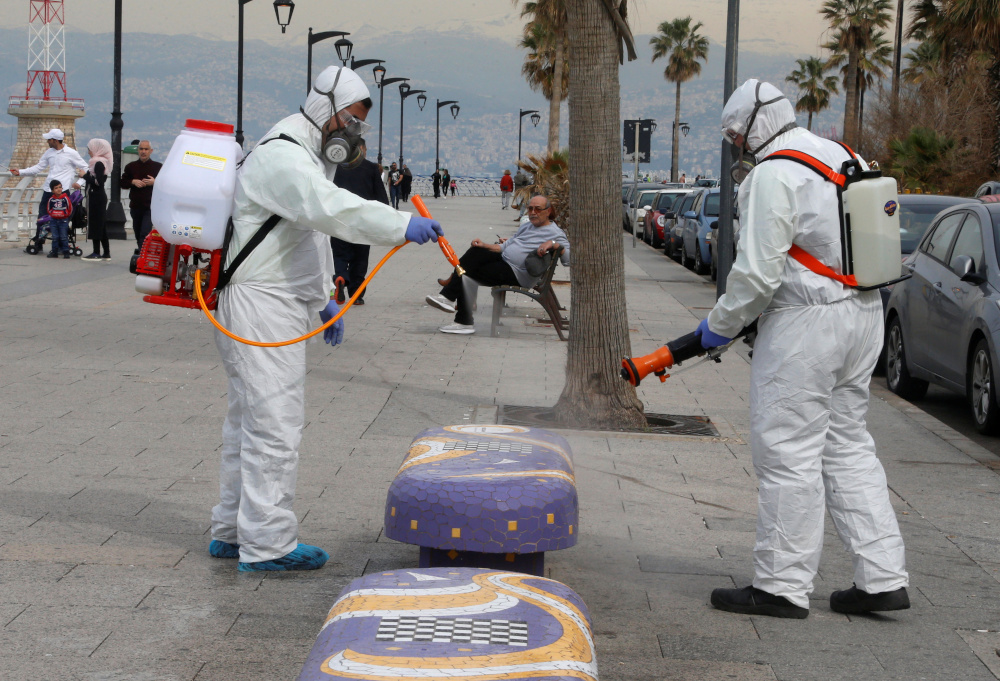 Employees from a disinfection company sanitize a bench as a precaution against the spread of the coronavirus in Beirut March 5, 2020. The number of cases is steadily increasing in Lebanon, which announced its second death from COVID-19 March 11. (CNS/Reuters/Mohamed Azakir)

A group of priests in Lebanon have quarantined themselves while a pair of their elders are fighting coronavirus. A Catholic hospital in another part of the tiny Mediterranean country has also seen a spread of the COVID-19 as fear of the disease grips the cash-strapped nation.

The number of cases is steadily increasing in Lebanon, which announced its second death from the virus March 11. Officials are concerned that Lebanon is not equipped to face a mass outbreak.

Already hit by economic collapse and anti-government protests, Lebanon is now grappling with an outbreak of the deadly illness — its latest in a long list of crises. Lebanon is one of several Middle Eastern countries combating the infection and its economic implications.

"What is sad in Lebanon is that in the first few days all the (coronavirus) cases were coming from Iran or Italy. Now we have cases (of people) who have never been in Iran or Italy and were not connected to people in Iran or Italy," Michel Constantin, Catholic Near East Welfare Association's regional director for Lebanon, Syria and Egypt, told Catholic News Service by phone.

"That's why we believe the virus is not contained anymore. It's spreading, but we are still not in the high level of infection. It's not like Italy. In Lebanon, we are registering some five to seven cases a day," said Constantin. However, he said the infection is creating "a very big panic in Lebanon."

Constantin described "an accident in a private hospital for the Maronite church called Notre Dame de Secours in Byblos."

"It seems that they didn't take the right precautions in one of the cases because they weren't sure and took some time before sending the case to the big hospital, where people are quarantined. We had five people and two nurses in this Catholic hospital infected (with the coronavirus)," Constantin said.

Most of the coronavirus cases in Lebanon are being treated at the Rafik Hariri University Hospital in the Lebanese capital, Beirut.

"One is 82. The other is perhaps 80. One is in a critical condition, while the other is better. We now have 15 Jesuit priests locked inside the residence who have decided to remain in isolation. All the employees are outside. The church, offices, the residence, the bedrooms, everything is being disinfected," Constantin said.

Lebanese authorities have made the decision to close schools, universities, cafes, pubs, parks, museums and other public places in a bid to curb the COVID-19 spread. Sports tournaments have been postponed and cultural events canceled.

Lebanon announced it would deny entry to nonresident foreigners arriving from China, South Korea, Iran and Italy, which are among the hardest hit by the epidemic.

With a grinding liquidity crunch and dwindling foreign reserves, Lebanon has struggled to secure the dollars needed for medical imports even before the novel coronavirus arrived.

The country is very clearly in a dire situation economically and financially, while finding itself having to combat the coronavirus at this time, as well, Habib Malik of the Lebanese American University told CNS. 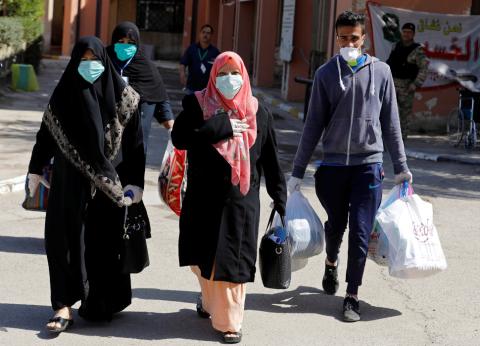 Iraqi women who have recovered from the COVID-19 wear protective face masks as they walk with a man after leaving the quarantine hospital in Baghdad March 9, 2020. (CNS/Reuters/Khalid al-Mousily)

"People are very, very nervous. If a global economic recession is going to kick in because of this epidemic, then this will simply mean that there will be less money for countries like Lebanon, ailing for other reasons. Right now, the (Hassan) Diab government is being very honest and realistic with the people and the debtors that Lebanon would like to negotiate a restructuring of the debts," he said.

Lebanon's public debt is worth around $89.5 billion, with some 37% of that in foreign currency, according to the Reuters news agency.

The nation of 6.8 million people is hosting about 1.5 million Syrian refugees, as well as nearly 20,000 refugees from other countries.

"To date and based on available evidence, there have been no reports of COVID-19 infections among refugees and asylum-seekers. However, the virus can affect anyone, and it is our collective responsibility to ensure that the global response includes all people," Filippo Grandi, the U.N. High Commissioner for Refugees, said in a statement March 10.

"In Kurdistan where we mainly work, the situation is a little bit better than other cities in Iraq because they are making the needed precautions and taking the temperatures of everyone who comes in. So, it's better," he said.

"The big chaos is in Baghdad and other cities in the south, because many of the cases had visited Iran. There was a pilgrimage in these days in Iran and that is where they got infected," he added.

The Mar Narsay dispensary in the northern city of Dahuk is a recipient of CNEWA aid. Fr. Aphrem Philipos, who administers the facility, told CNS by phone that so far there were no registered cases of coronavirus in Dahuk, but as of March 10, there were four in Irbil, the capital of Iraqi Kurdistan, and 10 in Sulaimaniyah. "There is more safety in our city."

Authorities are "quarantining people who are experiencing problems. The government has also closed all of its offices, except for those of security and health departments. The country's borders have been closed," Philipos said.

"Any place where they believe there is a problem, it must be closed. Mosques are now closed, there is no prayer. Churches are closed. They don't have prayer or Mass. Also, halls are closed for wedding and other receptions as are cafes," he added.

It's believed that at least seven people have died from the coronavirus in Iraq and 71 cases have been officially recorded. Iraq's Cabinet has also urged citizens to avoid travel outside the country and not to commute between provinces, according to local news reports.

Iraqi Health Minister Jaaffar Allawi said Baghdad has been successfully fighting the virus compared to France, Italy and the U.K., adding that the country has received support from China.