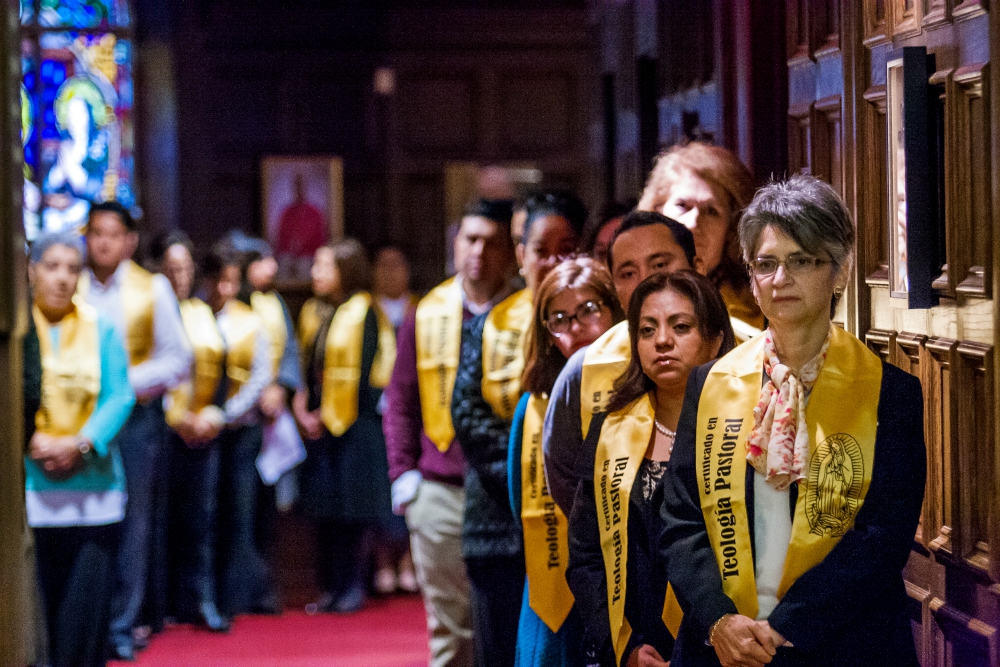 Lay students receiving a pastoral theology certificate in Spanish line up before Mass and a graduation ceremony in January 2016 at Holy Spirit Church in Atlanta. (CNS/Georgia Bulletin/Thomas Spink)

Priests are graying, fewer in number, with little relief in sight.

That reality was the impetus for a resolution endorsed by the Association of U.S. Catholic Priests, calling upon Catholic bishops in the United States to enlist the aid of lay pastoral workers to administer parishes.

Passed by the association at its convention in Atlanta last June, the resolution calls upon the church to allow "well prepared pastoral ministers who, working collaboratively with canonical pastors, can know, guide and accompany the faithful on their journey of faith via parish communities."

The resolution urged that bishops employ lay workers, deacons and religious who are currently in pastoral ministry to lead parishes under the direction of ordained pastors, a framework allowed in canon law.

These lay leaders and deacons should have "the flexibility to make ordinary decisions and actually lead the parish according to its gifts and needs."

The document envisions clusters of parishes, led by laypeople and deacons, who would make day-to-day decisions about their churches while reporting to an ordained pastor.

The priests' association urged bishops to provide more training for such lay leaders of priestless parishes. Such local leaders would enable parishes to minister to those who need pastoral care, including the sick and the bereaved, in a way that priest pastors, who are sometimes asked to oversee as many as three parishes at a time in some dioceses, are unable. The resolution stated that lay pastoral administrators should be paid a living wage, and be provided benefits and job security.

Lay leaders of priestless parishes, including women, can lead worship services and perform the duties of pastors, with the exception of sacramental tasks reserved for the ordained, the resolution said.

The Center for Applied Research in the Apostolate (CARA) at Georgetown University notes that the number of priests in the U.S. is now about 37,000, a decline from 58,632 in 1965. The Catholic population has increased from 48.5 million to 74.2 million in that time, while attendance at Mass has declined from 55 percent of all Catholics in 1965 to 23 percent in 2017.

Out of 17,156 parishes in the U.S., more than 3,500 have no resident pastor. Laypeople and deacons administer 347 parishes, according to CARA.

Authors of the resolution from the priests' association said that the decline in clergy numbers and Catholic practice are related.

Fr. John Hynes, pastor of St. Catherine of Siena Church in Wilmington, Delaware, was co-chair of the committee that wrote the resolution. He said the document is a response to the impact of an aging, declining-in-numbers priesthood in the United States, and the continued consolidation of parishes due in part to the lack of potential leaders.

But continuing the status quo is not a long-term solution. "It's like we are cheating the people," said Hynes. "We need lay leaders in parishes to ensure that the range of Catholic life is fulfilled."

Already, a number of dioceses are employing lay pastoral leaders. But the effort is not consistent. Sometimes lay administrators are dismissed when a new bishop is brought to a diocese. That is why there is a need for the body of bishops to explicitly endorse the concept and provide consistency, said Hynes.

Msgr. Raymond Cole, a retired priest of the Diocese of Metuchen, New Jersey, and co-chair of the document committee, said it borrows from "Co-Workers in the Vineyard of the Lord," a 2005 U.S. bishops' statement that encouraged lay pastoral workers.

But, he said, the concept "has to be opened to further growth and modification." In informal responses, bishops have responded favorably to the resolution, according to Cole. And some dioceses, such as Youngstown, Ohio, and San Bernardino, California, already use laypeople as leaders of parishes, consistent with canon law.

There is still resistance, said Cole, who surmised that those bishops who oppose the use of lay workers as parish leaders have not been heard from. That opposition is formidable.

"It's change. It's asking for a major shift in the way we do things," he said.

But the resolution argues that inaction is dangerous.

"If USA Church leadership postpones dealing with this issue, the window of opportunity will slowly close. Then we will experience a greater collapse of parishes than we are currently experiencing, a loss of morale and health among priests, and further decline of the morale and trust of people who depend upon us to meet their spiritual needs. As our Catholic presence diminishes, so will our presence in society in all of its aspects," it says.