Exhibit offers a window into this deeply religious Renaissance man 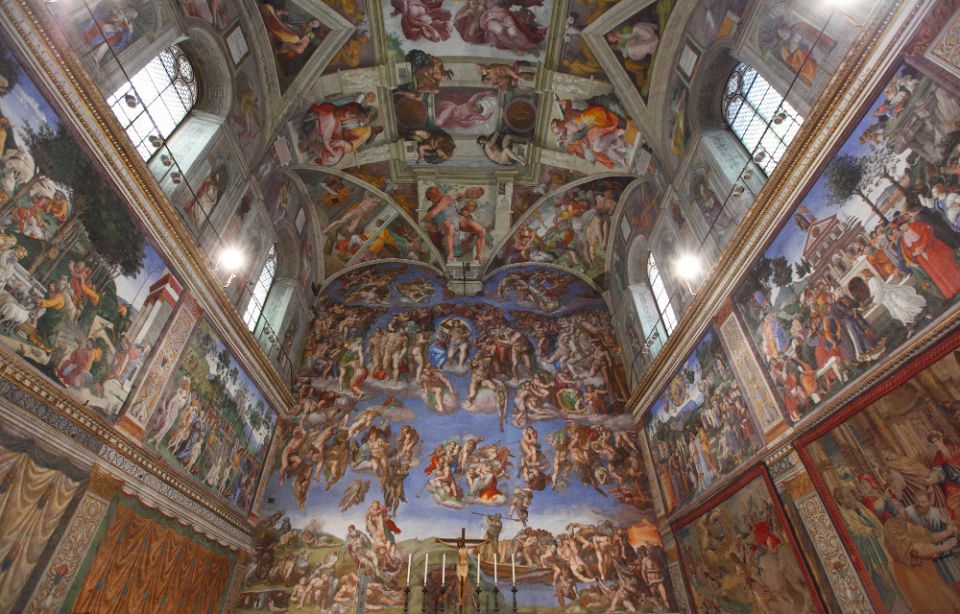 The Sistine Chapel in the Vatican Museums is seen at the Vatican in this July 14, 2010, file photo. (CNS/Paul Haring)

The Italian artist born Michelangelo di Lodovico Buonarroti Simoni in 1475 rarely appears to have been of his own time. At 20 or 21, Michelangelo passed off a sleeping cupid he'd sculpted — now lost — as an ancient Roman statue. Nearly a decade prior, he had painted "The Torment of St. Anthony" (today in the collection of Kimbell Art Museum in Fort Worth, Texas), which suggests a much older artist's perhaps life-weary perception. The absurdist collage of demons worthy of Hieronymus Bosch — who here tug at the Egyptian monk's hand, there appear poised to smack him with cudgels and surround him and threaten to plunge him to his death — are terrifying. But more menacing is the saint himself. His expression, circumscribed by his halo and long white beard, indicates a man who has literally seen it all; no wonder he won't yield to the infernal temptation.

But this painting too has artificially aged, albeit in a metaphorical manner. The young artist copied an engraving — made just prior to or the year of Michelangelo's birth — by German artist Martin Schongauer. Again, the young artist channeled a more mature posture.

Yet, as he grew older, Michelangelo faced a different scenario. Rather than the work appearing too old, the artist became that himself.

"One of the tragic things about Michelangelo is that he lives practically twice as long as the life expectancy in the Renaissance: almost 89 years, where the average age is 40 to 45," said William Wallace, distinguished professor of art history at Washington University in St. Louis and author of a forthcoming book on Michelangelo, which will be his eighth on the artist. "He outlived his entire family and almost every one of his friends."

Wallace's late mentor, Howard Hibbard, a longtime Columbia University art historian, once quipped of Michelangelo, "He started dying at about 40 and did it for 50 years."

That meant Michelangelo, whom Wallace calls "hugely devout," spent a lot of time thinking about death, which brought him closer to his faith, Wallace said. A profound religious sense emerges in many of Michelangelo's poems, part of a body of the artist's work about which many people likely know little.

"When people think about Michelangelo, they first and foremost think of the Sistine ceiling. Then they probably remember, 'Oh yeah, he did the David and the Pietà,' " Wallace said. "They realize, 'OK. He's a painter and a sculptor.' Most Americans forget that he's also one of the world's most important architects. He built St. Peter's, after all." 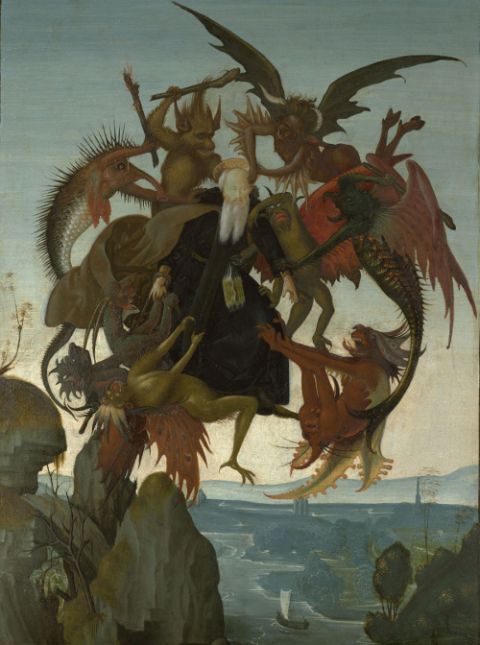 "The Torment of St. Anthony" by Michelangelo, circa 1487-88 (Kimbell Art Museum)

It's rare for Americans to be aware of Michelangelo's poetry, and his drawings come even further down on the list of works of which they're aware, according to Wallace. The latter are the focus of an exhibition titled "Michelangelo: Divine Draftsman and Designer," on view through Feb. 12, 2018, at New York's Metropolitan Museum of Art.

"The drawing show opens a window onto all the different facets of this multisided creative individual, who works on both the left and right side of the brain, which is incredibly unusual," Wallace said. "Certainly, the only way we are going to see Michelangelo's architecture in America is through his drawings."

Foremost in Michelangelo's architectural repertoire was St. Peter's, to which he devoted the last three decades of his life. Even in his 70s and 80s, Michelangelo knew he'd never see the project, which took 150 years, completed.

"We speak of that church as his, because he had such a profound and strong effect," Wallace said. "It was the salvation of his soul. That was what he was seeking. It wasn't the glorification of himself or of art."

In his letters, Michelangelo said he couldn't leave Rome, even as people tried to lure him back to Florence to die in his hometown. He indicated leaving Rome would be a sin, said Wallace, who sees a "very nice parallel" between the elderly Michelangelo working on a church he wouldn't be able to see and Moses leading the children of Israel to a promised land he'd never be permitted to enter.

Basilian Fr. Thomas Rosica, CEO of the Salt and Light Catholic Media Foundation in Canada, has long regarded art as an important tool for teaching, preaching and ministry. In particular, he is inspired by Caravaggio and Michelangelo.

"When Michelangelo was on his deathbed, his students at his bedside wailed, 'Michelangelo, how will Rome ever get along without you?' " Rosica said. "To which, it is reported, Michelangelo faintly waved his hand to the window, with its vision of his sculptures and architecture, and whispered, 'Rome will never be without me.' "

The Metropolitan Museum exhibition catalog frames things differently. "Although he spent the last 30 years of his life in Rome, to the end his love was for Florence, his patria (homeland), and all things Florentine," it records. "In Rome, he surrounded himself with Florentines, many of whom were political exiles."

The artist repeatedly, even two days before his death, instructed his nephew and close friends to bury him in Florence, the catalog adds; Michelangelo's tomb, in fact, is in Florence's Santa Croce.

Another tomb that is well-documented in the exhibit is that of Pope Julius II, a preliminary drawing of which is in the Met's collection. The pope commissioned Michelangelo to create the tomb eight years before the former's death, and it was intended for St. Peter's. But, after the pope's death, a new contract needed to be signed with his heirs in 1513, as other projects had sidetracked the artist.

The pared-down final tomb was completed in 1545 at San Pietro in Vincoli, "far away from the papal majesty of Saint Peter's Basilica," the Met notes.

Given the length of Michelangelo's life, and the tendency of some commissions to linger for decades, Wallace thinks of Michelangelo as having lived through three ages of religion.

"He was born in a time when there was only one religion in his mind, in everybody's mind: It was the universal Catholic church; everything else was heresy," Wallace said. "He lived long enough to watch [Martin] Luther and Henry VIII break away from the church, and suddenly the sense of a universal church was under attack. But then he also lived long enough to watch the church fight back through the Counter-Reformation."

The Sistine ceiling relates to the era of the universal Catholic Church, while the "Last Judgment" and St. Peter's itself relate to the Counter-Reformation, said Wallace.

"The greatest affirmation of Catholic faith is the church," he said. "For the last 18 years of his life, Michelangelo is devoted to building the greatest church of Christendom."

Wallace allows that Michelangelo, particularly in his friendship with one Vittoria Colonna, who died in 1547, adopted a new kind of thinking about the church that was potentially radical, although not Lutheran per se. Michelangelo came to realize that the church was partially corrupt and needed reforming. He associated with others who didn't necessarily want to overthrow or abandon the church, but who wanted to chart a more spiritual path.

"Michelangelo is very attracted to these people, because they are intellectuals," Wallace said.

The artist and Colonna exchanged gifts, both writing and artwork, which they understood to be spiritual in nature, the exhibition catalog notes. In one, Michelangelo wrote, "I could make something by my hand, but then, having recognized and seen that the grace of God cannot be bought, and that to have it with discomfort is a grave sin, I say the fault is mine, and I willingly accept these things."

She wrote to him, in part, "I had the greatest faith in God that he would grant you a supernatural grace to make this Christ, and, when I saw it, it was so wonderful that it surpassed all my expectations in every way." 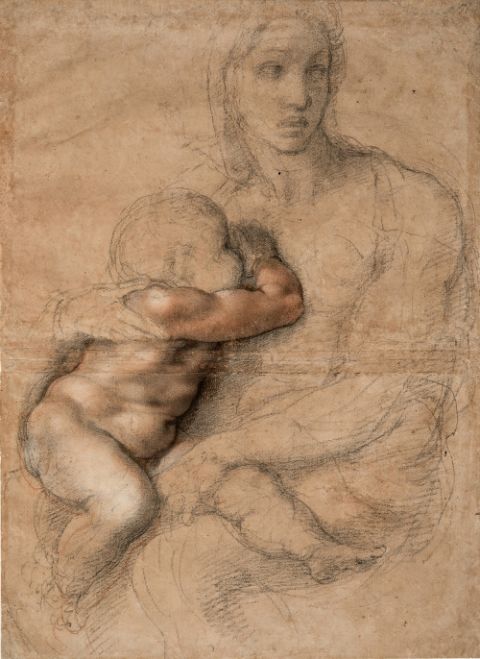 Unfinished cartoon for a Madonna and Child by Michelangelo Buonarroti, 1525-30 (Casa Buonarroti, Florence)

A much more contentious relationship existed between Leonardo da Vinci and Michelangelo, fueled by the former's jealousy, according to Wallace. And some of the fascination with secrets allegedly embedded in the former's work — of the Da Vinci Code flavor — have swirled around Michelangelo, too, as in a 2009 book, The Sistine Secrets, which claims that the artist hid bold attacks on the Catholic Church in his Sistine paintings.

Why, Wallace wonders, would it take 500 years to see these hidden symbols, if indeed Michelangelo had concealed them?

In fact, according to Wallace, things would have happened in the opposite direction for Michelangelo, who wasn't sufficiently educated to read the Bible in Latin.

"Michelangelo is working in the place with the smartest theologians in the world. When he comes to the point of having to say, 'My gosh. I need to paint Daniel.' Or, 'I need to paint Zachariah. I know a little bit, but who is Zachariah?', he goes and he talks to some theologian in the Vatican and said, 'Please tell me more about Zachariah,' " Wallace said.

"What's remarkable is that he listens to some very learned theologian, who probably has read the Torah and really understands this literature and history, but then he visualizes it."