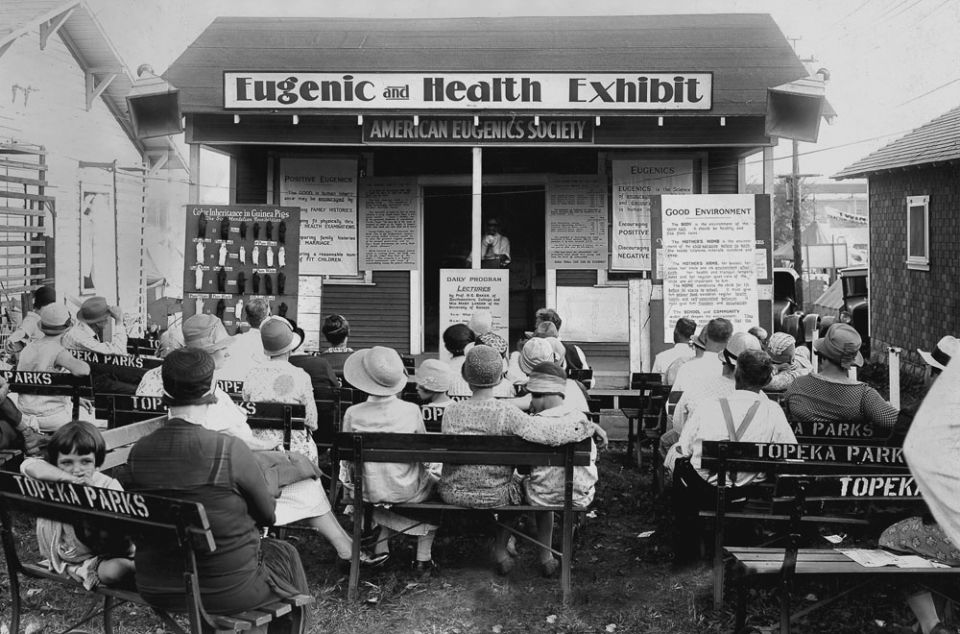 A Eugenic and Health Exhibit at the Kansas Free Fair in 1929 (PBS/Courtesy of American Philosophical Society, American Eugenics Society Records)

"The Eugenics Crusade," a two-hour documentary written and directed by Michelle Ferrari, tells the largely unknown story of America's quest to breed healthy babies — the impulse to perfect humanity — beginning in the late 19th century.

By the mid-1920s, eugenics was mainstream and codified by laws that restricted immigration and allowed for the sterilization of tens of thousands of American citizens deemed to be "morons," "unfit," or poor, illiterate or promiscuous.

As the film narrates, in Buck v. Bell, the U.S. Supreme Court upheld a Virginia statute in 1927 that permitted the forced (without consent) sterilization of those deemed unfit and a burden to society if they procreated. It was a "fake" case, actually; the attorney representing Carrie Buck was hired by and took orders from attorneys for the Virginia State Colony for Epileptics and the Feebleminded. This institution created this test case to insure they could continue to carry out their policies and procedures to purify populations.

This decision by the Supreme Court has never been overturned and still stands. In fact, forced sterilization is permitted in half the states in America by laws that have not been challenged or overturned.

Related: Documentary on forced sterilization of Latina women is a must-see in election year

Eugenics (meaning "well born") was coined in 1883 by a cousin of Charles Darwin, Sir Francis Galton. His vision was that by using genetic statistics, humans could take charge of their own evolution. He based his ideas on the work of the priest-scientist Gregor Mendel, who is considered the father of genetics through his work on generational inheritance of traits passed down through pea plants.

But it was American Harvard University-educated biologist Charles Davenport who established eugenics in the United States. He believed that not only physical traits could be passed down but also criminality, pauperism and sexual deviance, as well. He held that new immigrants were diluting white American stock and convinced the Carnegie Foundation to fund his work which, among other things, led to laws that based on faulty science, defined who was unfit, allowed forced sterilizations, regulated immigration to northern European countries and limited those from southern Europe.

Though the faulty work of eugenics lasted less than 40 years (discredited during the Depression, when even the rich became paupers), American eugenics influenced Adolf Hitler and the Nazis, and its legacy is with us still.

"The Eugenics Crusade" tells a chilling story and shows how easy it is to use fear of "the other" to bring about the most inhumane treatment of human beings.

[Sr. Rose Pacatte, a member of the Daughters of St. Paul, is the founding Director of the Pauline Center for Media Studies in Los Angeles. "The Eugenics Crusade" premieres Oct. 16 on PBS.]