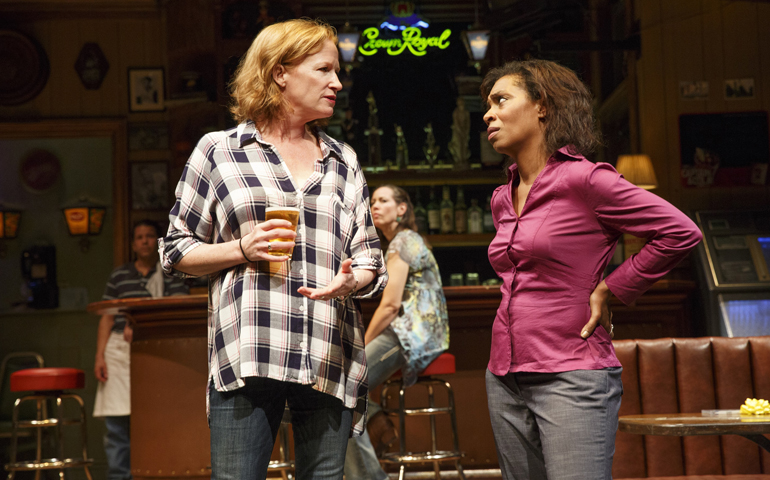 A flicker of humanity flashes at the end of Lynn Nottage's latest play, "Sweat," directed by Kate Whoriskey at Off-Broadway's Public Theater. Hope is a hallmark of the Pulitzer Prize-winning playwright and it is needed after the two and a half hours of economic hardship, tattered friendships and thwarted dreams among the workers in a steel-tubing factory in Reading, Pa., as they face the closing of the plant that has employed generations of their families.

"Started in `74, walked in straight outta high school. First and only job," says Tracey (Johanna Day) whose friendship and working relationship with Cynthia (Michelle Wilson) and Jessie (Miriam Shor) goes back for decades. All are in their 40s at the start of the play in 2000 when rumors of layoffs begin. Time alternates with 2008 when the plant has closed.

After work the women hang out together at a local bar managed by Stan (James Colby), who worked at the plant for 28 years before injuring his leg in a machine accident at the plant. (Set designer John Lee Beatty has created a bar so realistic I felt I could walk right in and order a beer.) The four of them have the camaraderie of people who have shared lives for years. This unity is marred, though, when Cynthia, the African-American member of the group, is promoted to management. Tracey, who also had applied for the job, says Cynthia was chosen because of her race. Her resentment drives a wedge between them. In the end, they will all be unemployed, but without the strength of the friendship that had sustained them.

While this might sound bleak, and it is, Nottage is skilled at creating people we care about and cheer for. These characters are based on her many visits to Reading over the years where she got to know the mayor and the citizens, including those who sleep in the woods because they lost their homes. The city was ranked as the country's most economically depressed in 2011.

The playwright's empathy for her characters is another hallmark of her work. In "Ruined," for which she won her Pulitzer in 2009, we feel for the young women in the bar and pool room run by Mama Nadi in a small town in the civil war-torn Democratic Republic of Congo. The girls must provide more than food and drink to the soldiers and miners who arrive daily, and while it seems Mama is pimping them, which she is, she also is providing them a home and family life together and protection from the gang rapes and homelessness they would face on the outside.

My favorite Nottage work is Intimate Apparel (NCR, April 30, 2014). I cared deeply for its heroine, Esther, who was played movingly by Viola Davis Off-Broadway in 2004. Esther was a 35-year-old, hard-working seamstress living in a boarding house whose longing for love led her to be charmed out of her life's savings by a man she met through the son of her church's deacon. I loved her no-nonsense attitude and humor and I wanted her to be happy.

In this latest work by Nottage, I could relate to the women because I've had times of being unable to find work and I know the fear and demoralizing sense of that experience. The Public Theater's artistic director, Oskar Eustis, explained in a program note why the play is timely.

"The decline of unionism, the weakening of the federal government, loss of legitimacy of the idea of collective action and the increasing power of the market to monetize everything have helped return us to a level of inequality not seen since the Gilded Age," he wrote.

He praised Nottage for tackling the subject "on the ground," in the lives of individuals who were being overwhelmed by huge historical shifts. "She writes, not from the airy tower of an intellectual, but from the lived experience of working people.

"However, she also does what a great writer does, and makes these idiosyncratic, terribly specific individuals representatives of us all. They are working class everywoman and everyman, reflecting back to ourselves the truth of our country and our times."

The play's portrayal of the decline of factory jobs in the Rust Belt was also a topic in the presidential race, with both candidates appealing to those voters.

"Sweat" was commissioned and first produced by Bill Rauch and the Oregon Shakespeare Festival. It then traveled to Arena Stage in Washington, D.C. The New York premiere continues through Dec. 18.

[Retta Blaney is an award-winning journalist and author of Working on the Inside: The Spiritual Life Through the Eyes of Actors, featuring interviews with Kristin Chenoweth, Edward Herrmann, Liam Neeson, Phylicia Rashad, Vanessa Williams among others.]