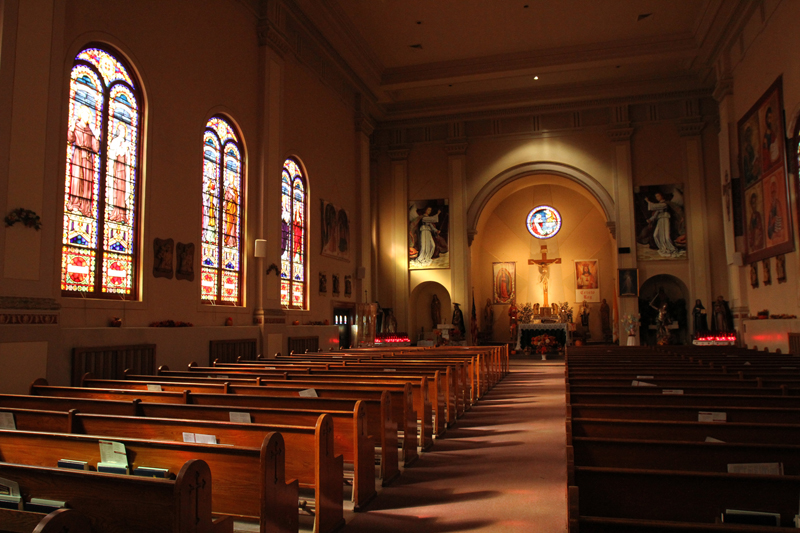 The interior of St. Roch Church in the Staten Island borough of New York is seen between Sunday morning Masses on Nov. 2, 2014. The NY Archdiocese announced fall 2013, as part of a massive consolidation and closing process involving dozens of churches, masses and sacraments will no longer available on a weekly basis at St. Roch Church. (RNS/Gregory A. Shemitz)

Been there, done that.

Massive consolidation of Catholic parishes has a familiar ring to mainstream Protestants who have been shedding congregations since the 1970s.

"But we have to have an equal conversation about how do we close existing congregations," Darryl Stephens, director of United Methodist Studies at the Lancaster Theological Seminary in Lancaster, Pennsylvania, told NCR.

Stephens, a United Methodist pastor as well as theologian, has written extensively about the best way to close congregations.

Catholic dioceses, such as Philadelphia, New York, Boston, Hartford and, most recently, Pittsburgh, now considering consolidating 188 parishes into 48 groupings, are relative newcomers to the process of closing churches.

The buzzword among Protestant leaders is "congregational vitality," an idea popularized by evangelicals who promoted the idea of "affinity churches," in which new members are added via the outreach efforts of established members. The focus is on evangelizing among friends and neighbors. The paradigm has been "you contact the people you know," said Stephens.

It proved successful, particularly among more conservative members who gravitated towards social networks in suburbs across the U.S. Some argued that mainstream churches were unable to keep pace because they became too liberal. But, said Stephens, evangelical numbers are beginning a decline as well. The issues go beyond ideology and theology.

Demographics is often destiny. One such demographic is the birth rate, which tends to be lower among liberal Protestants. Another is that many mainstream Protestant churches were built in urban areas, where many of their congregants have fled, or in small towns or rural regions that have experienced decline. Most congregations, he said, reflect the demographics of the group that founded them. So while urban areas may now be filled with African-Americans and Latinos, mainstream Protestant churches continue to reflect the European heritage of their founders, now advanced in age and declining in numbers.

The United Methodist Church has some 32,000 congregations across the country, with a saturation level comparable to the U.S. Post Office. There is simply little room left for new congregations to be established, said Stephens. About a third of the existing congregations are expected to close by 2030.

"By any common-sense measure we have too many congregations," he said. Some United Methodist congregations stumble along with declining membership, sometimes as low as 30 or below. Those remaining are often older and poorer than those who have left.

United Methodist leadership is exerted via 50 conferences across the U.S., representative bodies of clergy and laypeople. Congregations that are struggling are sometimes closed by the conferences, other times the congregations come forward with the realization that they will have to close. It is rarely an easy decision.

Stephens said it's better for struggling congregations to plan their own deaths. As in many Catholic parishes, there will be opposition. Some will look back to how the foundations of their church buildings were laid by great-grandparents, and how landmark events in their families' lives centered around a church building.

"People are grieving, there is loss," said Stephens, noting that at such times it's up to the wider church to step in with pastoral care. "How do you help people feel a larger vision of church? When people only see the local congregation they are missing a larger vision of what church is about."

Struggling churches can close and have a happy death, said Stephens, but they need to plan.

One example can be found in the case of the Richfield, North Carolina, United Methodist Church. The congregation there has ample money and regularly contributes to the town's food drives. Its members are faithful attendees almost every Sunday.

But in a declining mill town, the church failed to attract new members for decades. The congregation is down to 12.

With the assistance of a Church Legacy Initiative sponsored by their United Methodist Church Conference and supported by a grant from the Duke Foundation, the members of Richfield United Methodist planned their congregation's demise. The initiative bills itself as a "hospice care" for churches, and has been assisting a dozen congregations in the process of closing.

Richfield United Methodist has decided to close in July 2018. Meanwhile, members want to spend the next year furthering its legacy by participating in the town's Thanksgiving Food Drive; Christmas caroling at area nursing homes; the town's Easter Sunday service, and a drive for toiletries for a house for men and women in recovery.

The church plans to transfer its parsonage to Pfeiffer University, a United Methodist-affiliated school which will use it for students studying early childhood education. It is hoping to find a home for its church building, possibly repurposing it as a kitchen or warehouse to provide meals for elderly residents.

Stephens, who attended a Catholic high school, said there are differences between the structures of both churches and the challenges they face. Immigration, especially the presence of heavily-Catholic Latinos, has helped Catholic parishes thrive. And, unlike the Methodists, one large issue facing Catholic parishes is a lack of potential pastors (among Methodists, there are plenty of ordained ministers but relatively few jobs; many pastors are now part-time ministers).

Still the Methodist experience in closing congregations offers lessons. Stephens suggested that newly-merged churches sell all their property, and start anew with a different building, with the goal being the establishment of an easily-recognized, new church community.

Methodists have also learned that there is a dynamic in numbers. Members of small churches, with fewer than 75 members, are able to establish an intimate relationship with the pastor, who will know their names. When congregations get larger after a merger — the tipping point is considered 150 members — the pastor by necessity cannot have such a close relationship with that many people. A new style of leadership needs to emerge in such cases, with more lay leadership exerted, said Stephens. Larger congregations often split into smaller groups.

Church history backs recognizing the death of congregations. Many of the churches described in the Acts of the Apostles no longer exist, noted Stephens, as the universal church moved beyond its Middle Eastern and North African roots. While Methodists and Catholics have long been divided by Reformation issues, they do share a common belief. Christians of all stripes say that from death comes new life. That applies as much to churches as it does people, said Stephens.

This story appears in the The Field Hospital feature series. View the full series.
A version of this story appeared in the Nov 17-30, 2017 print issue.