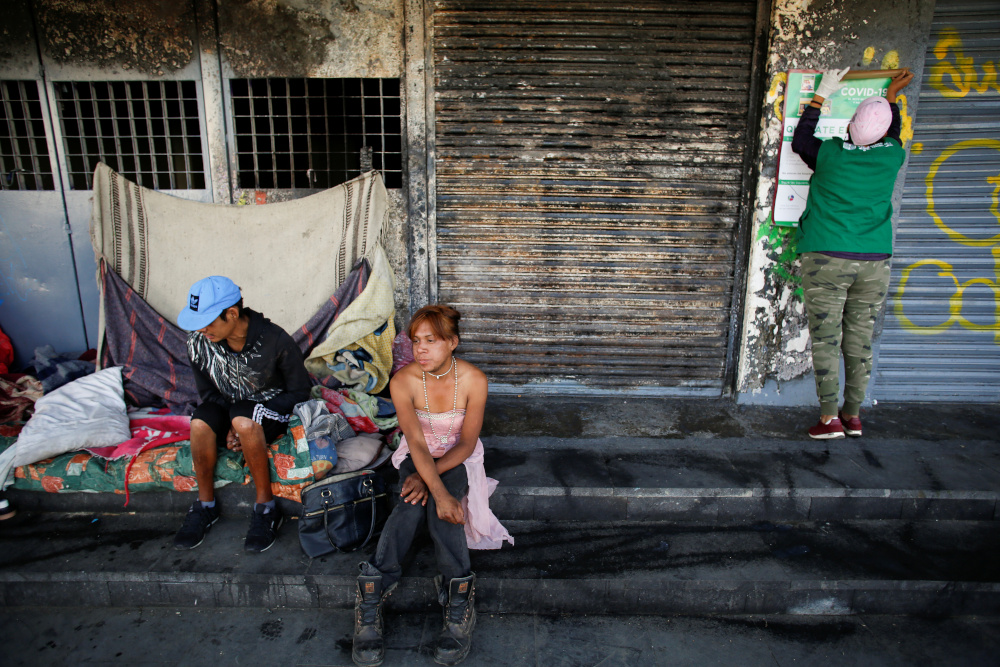 A city government worker places a poster with information next to homeless people in Mexico City March 31, 2020, during the COVID-19 pandemic. (CNS/Reuters/Gustavo Graf)

Mexico's bishops have called for the federal government to reconsider its COVID-19 response, urging the president to set aside a suite of mega-projects and instead put the funds toward families facing pandemic hardships.

The bishops also announced an initiative — "Families without hunger" — to combat rising hunger as millions of Mexicans lose work and sources of income with the spread of COVID-19.

"We invite those with the decision power over large national projects and public works to consider the opportunity to allocate these resources, during the months in which many Mexicans are without work, to mitigate the food shortages in many homes. ... Health, food and work are inescapable demands in this COVID-19 health emergency," the bishops said in April 24 statement.

"We exhort and ask all Mexicans, including (governments) to forget personal, party, ideological, political and religious interests and unite in saving every human life."

The statement alluded to projects being pushed by President Andres Manuel Lopez Obrador, including an $8 billion refinery, two railways and an airport near Mexico City. The president has provided funding for these mega-projects amid the COVID-19 crisis.

Lopez Obrador also promised belt-tightening such as slashing bureaucrats' salaries and eliminating 10 government agencies, while rejecting business bailouts and tax breaks. His response — in a country with no unemployment insurance — has been to push up pension payments and provide loans of 25,000 pesos ($1,000) to small businesses.

Hugo Lopez-Gatell, health undersecretary, said the figures likely undercount cases by a factor of eight. Critics, meanwhile, say the government has depended more on disease modeling to respond, rather than testing.

Lopez Obrador has spoken optimistically, despite the gloomy outlook throughout Latin America, where most governments have taken more drastic steps such as complete quarantines.

"We're doing well because the epidemic has been tamed, instead of taking off as happened in other places," Lopez Obrador said April 26. He added parts of the country could return to normal as early as May 17, and school would resume June 1.

Mexico's bishops are planning for a longer-lasting pandemic and are mobilizing diocesan Caritas chapters and parish teams to respond. In their call for solidarity, the bishops asked for donations to buy "despensas" (care packages) which would be delivered by parish teams. They also announced partnerships with business and social organizations.

"We won't go knocking on doors to see who's hungry," said Fr. Rogelio Narvaez, president of Caritas Mexico, who urged people to contact local parishes if they're in need and for neighbors to check on each other.

The bishops have also established a help line for people seeking psychological and spiritual attention.

"People call in a desperate situation, mothers and fathers, who can't feed their families," he said.

"People are in a bind. ... They don't know where they're going to get money from," said Fr. Robert Coogan, an American priest in the northern city of Saltillo.

"Churches are in a bind. Because there are no Masses, there is no Sunday collection, so they don't have any money," he added.

At Corpus Christi Parish in Ciudad Juarez, Fr. Roberto Luna said many in his parish of factory workers "are without work or are receiving half their salaries, which creates needs."

"People are scared," he added, mentioning an increase in the number of people wanting to get their spiritual affairs in order. A person stopped by the parish and asked, "Padre, please baptize my 10-year-old son because I think that I'm going to die, that this pandemic is going to get me," he said.

In the western state of Michoacan, Fr. Andres Lario said many people live "day-to-day," picking limes and "if they go one day without working, they don't eat the next day."

Such is the hunger that drug cartels are distributing care packages, said Larios.

He told people on social media: "Go to the closest parish. All the priests in Apatzingan (his diocese) have agreed that no one goes hungry. Each priest will do whatever he can so you eat today."

The state government has announced penalties for people venturing out, something Larios said isn't easy to observe for people going hungry.