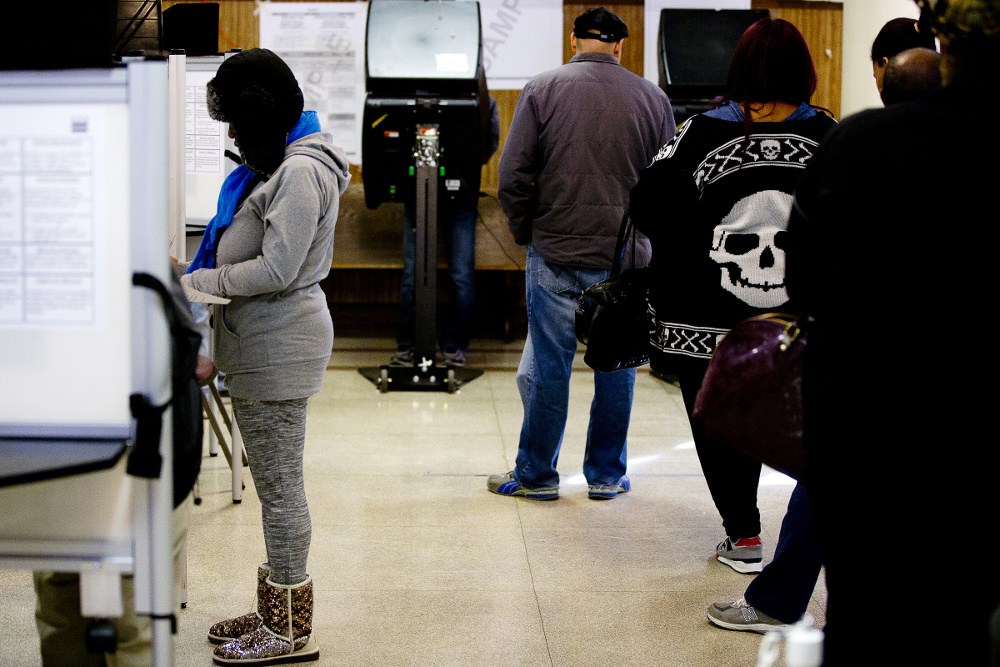 People wait in line to vote. Abdul El-Sayed, a 32-year-old doctor in Detroit, hopes to be elected as the nation's first Muslim governor in 2018. (CNS photo/Tyler Orsburn)

Perhaps no state has embraced the political outsider as much as Michigan, where a venture capitalist won the last two governor's elections and a real estate baron carried the presidential vote. Now Abdul El-Sayed is putting that affinity for newcomers to the test.

Democratic leaders are stunned by the sudden emergence of the former Rhodes Scholar, who served as Detroit public health director, in the primary field after he quickly raised $1 million.

He is one of four viable Democrats and, for now, three Republicans in a race that his party considers a must-win to re-establish itself after eight years of GOP control of state government.

Michigan has one of the largest Arab populations outside the Middle East, but is it ready to elect a Muslim as chief executive? El-Sayed says yes, though he insists the election will be about his qualifications and grassroots movement.

"I think folks are looking for something fresh, new, exciting, competent. And we offer that," said the self-assured El-Sayed, who emphasizes his work rebuilding Detroit's health department after the city's bankruptcy.

Political insiders are not sure about the religious complexities but are impressed by his fundraising.

"No one expected El-Sayed to raise that kind of money — no one," said pollster Ed Sarpolus.

The governor's race in 2018 is wide open with Republican incumbent Rick Snyder, a former business executive, leaving after two terms. Before Republicans swept to power in 2010, Democrats held the governor's office and one house of the Legislature.

The diverse Democratic field includes front-runner Gretchen Whitmer, a former legislative leader who has raised $1.5 million and has secured labor union support; Shri Thanedar, an immigrant entrepreneur from India who has given his campaign $3.3 million but remains largely unknown for now; and Bill Cobbs, an African-American former Xerox executive who has not collected much money.

The leading GOP contender is state Attorney General Bill Schuette, who joined the race this week. Other Republicans running are Jim Hines, who has given $438,000 of his own money, and conservative state Sen. Patrick Colbeck.

El-Sayed, the son of Egyptian immigrants, was born in Michigan and grew up in the affluent Detroit suburb of Bloomfield Township. His father and stepmother are mechanical engineering professors who now work as college administrators.

El-Sayed has been known for his speaking ability since his days at the University of Michigan, where he gave the senior speech to fellow graduates. The commencement speaker that day, former President Bill Clinton, said he wished "every person in the world" who is pessimistic about the nation's religious divide could have heard El-Sayed, who talked about the many opportunities at hand to "change the world."

Potentially the most progressive candidate in the field, El-Sayed frequently touts government's ability to help people and cites his initiatives in Detroit to provide free glasses to schoolchildren and increase lead exposure tests.

He criticizes unauthentic "corporate, bought-out" politicians and disavows corporate PAC donations. His fundraising base is dominated by physicians, tech executives and financiers, many from out of state.

El-Sayed is hoping to benefit from an energized Democratic backlash against President Donald Trump, who narrowly carried Michigan in 2016, and from the repercussions of a lead contamination scandal in the city of Flint blamed primarily on Snyder's administration. Trump has imposed a travel ban on Muslim-majority countries and blamed "both sides" for violence between white supremacists and their opponents in Virginia.

"What better way to send Donald Trump a message than to elect a millennial Muslim guy in a state that he barely took?" said El-Sayed, a former college lacrosse player with a stocky build.

Just two Muslims serve in Congress, neither with an Arabic surname: Reps. Keith Ellison of Minnesota and Andre Carson of Indiana. El-Sayed and Deedra Abboud, a Democratic Senate candidate in Arizona, are among the first Muslims to pursue major statewide offices.

In a 2016 Pew Research Center survey, 42 percent of U.S. adults said they would be less likely to support a Muslim presidential candidate. El-Sayed, who has faced attacks on social media because of his Islamic faith, keeps his campaign office location secret for safety reasons.

While Whitmer is considered the Democratic favorite, political analysts believe El-Sayed could appeal to anti-establishment activists and backers of former Democratic presidential candidate Bernie Sanders in next summer's primary.

One voter whom El-Sayed has won over is Sonique Watson, a 26-year-old professional blogger from Detroit who said she felt "a spark" because he is approachable and seems more like a passionate public servant than a politician. She likes his focus on the Flint crisis and not cutting "costs and corners" in government.

"All Abdul has to do is speak. He caught me just speaking," Watson said.

Yet there are skeptics.

"There's no reason for people to fool around here and take a flyer with someone who can give a nice speech but really is not ready for the job," he said.

Jermain Jones, a 37-year-old Detroit-area political organizer, said it is impossible to overlook the impact of El-Sayed's religion in rural or blue-collar areas.

"Even the Democratic establishment I don't think is ready to push an Islamic candidate in a state like Michigan," Jones said. "Islamophobia is strong in America right now."