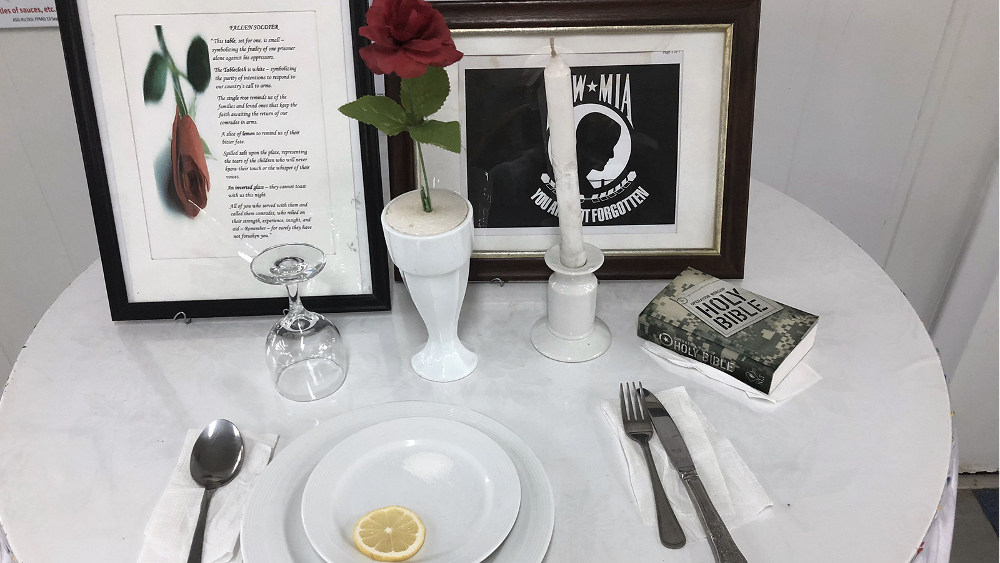 A Bible placed on a memorial table at a Wyoming Air Force base is at the center of an ongoing battle over what constitutes religious liberty and what violates it.

In response to demands by the Military Religious Freedom Foundation, Col. Stacy Huser, commander of the 90th Missile Wing at F.E. Warren Air Force Base near Cheyenne, Wyo., recently ordered that a Bible be removed from the base's "Missing Man" table. The table, a POW/MIA memorial common in military base dining halls, hospitals and ceremonies since the Vietnam War, is set for a meal in honor of prisoners of war, the missing in action and the fallen. A Bible is traditionally placed on the table.

But Mikey Weinstein, founder and president of the foundation, said the Bible violates the civil rights of military personnel, many of whom "have been abused in the military for not being Christian enough." Weinstein, a former Air Force officer and firebrand lawyer, claims to represent more than 50,000 anonymous clients worldwide, many of them Christians.

Weinstein approached Huser in May on behalf of 36 unnamed base officers and enlisted personnel. According to Weinstein, Huser "jumped right on it" and thanked him for "taking care of our Airmen." A replacement "book of faith" is in the works that will feature teachings from five religious traditions and include blank pages representing nonbelief. Alternate religious texts, including the Torah and the Book of Mormon, are being rotated through the Missing Man table until the interfaith book becomes available.

Huser said in a media statement that the Bible was removed to increase "the sense of belonging for all our Airmen; a large part of that effort is ensuring the religious and nonreligious feel included and cared for."

The Family Research Council, a conservative faith-based advocacy group, is asking via petition that Secretary of the Air Force Heather Wilson restore the Bible at Warren Air Force Base. The FRC said the generic book is "an affront ... to the very real faith that sustained many of our heroic POW/MIA warriors."

According to Chris Gacek, FRC senior fellow for regulatory affairs, such cases represent a "trivialization of religious freedom rights."  Placement of the Bible on the Missing Man table constitutes a minor, passive and nonparticipatory presence of a religious symbol, he said, something that reasonable interpretations of First Amendment law would not consider offensive. Further, said Gacek, in military cemeteries and memorials, where thoughts often turn to meaning-of-life issues, religious symbols of various faiths seem natural and even vital to many.

"The commander made a big boo-boo when she substituted another book," said Gacek. Creating the interfaith book could be seen as violating the First Amendment by demonstrating government bias in favoring one kind of religious content over another and establishing a preferred religion — or in this case, many religions.

The outcome of such demands and litigation threats often rests on the prevailing views of the current presidential administration. In 2017, Attorney General Jeff Sessions signaled that he would intervene in religious liberties cases only with a high level of need, a standard the Missing Man table controversy doesn't meet "even remotely," said Gacek.

In addition to petitioning Wilson, the FRC is appealing to members of Congress and to the public, urging a considered approach as opposed to the recent "hair trigger" removals of statues, monuments and other public symbols after complaints that they are offensive. "Are you going to rip out the crosses on the graves at all the American (military) cemeteries in Europe?" asked Gacek.

For his part, Weinstein stands firm, evoking former Supreme Court Justice Sandra Day O'Connor and abolitionist Frederick Douglass, and claims that the placement of the Bibles is "the worst form of bigotry and prejudice ... raping the civil rights of [those who object to the Bible's display]."

Weinstein recently claimed victory by having the Buffalo VA Medical Center remove their Missing Man table Bible. And in a U.S. naval hospital in Okinawa, Japan, where MRFF's demands were refused, an investigation is underway.

To Weinstein, only three table options are acceptable: Don't put the Bible on it, put a blank book on it or put out the multifaith book. Otherwise, he said, "Don't do a table."

Gacek, on the other hand, contended that America's Founding Fathers understood "that a society with any hope of being well-ordered" is dependent on shared, religiously rooted values. "The U.S. was not founded by people who were atheists."