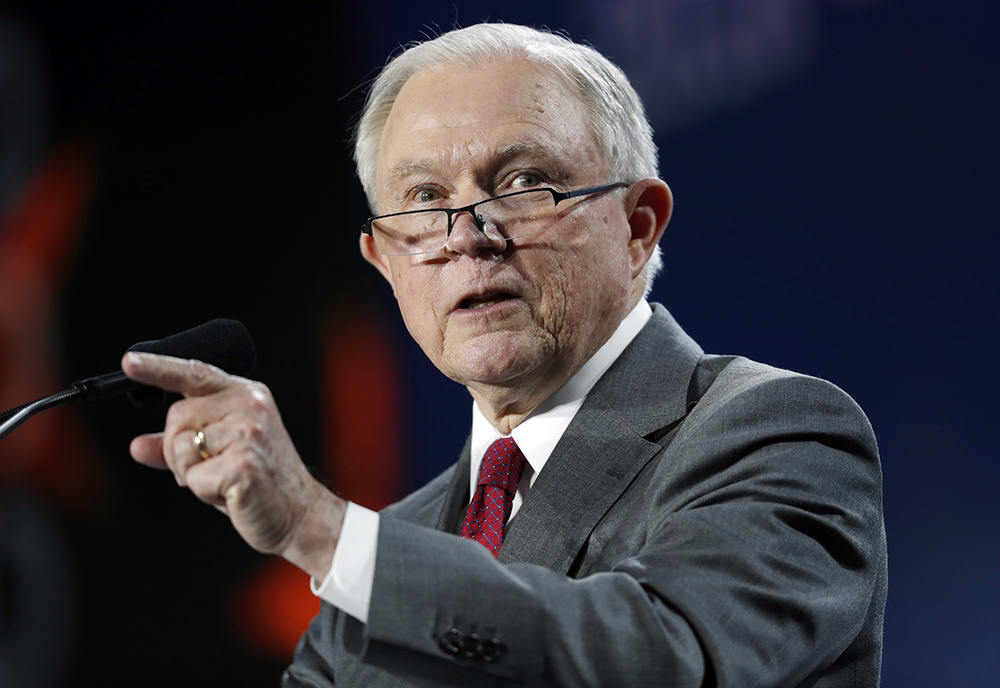 U.S. Attorney General Jeff Sessions makes a point during his speech at the Western Conservative Summit on June 8, 2018, in Denver. (AP/David Zalubowski)

More than 600 United Methodist clergy and laypeople have signed a formal denominational complaint against fellow United Methodist Attorney General Jeff Sessions, condemning his role in the Trump administration's "zero-tolerance" policy of separating children from their parents along the U.S.-Mexico border. The charges include child abuse, immorality, racial discrimination and "dissemination of doctrines contrary to the standards of doctrine of the United Methodist Church."

The complaint was sent  to two churches June 18, one in Alabama and the other in the Washington, D.C., suburbs, said to be affiliated with the chief lawyer of the U.S. government.

"We, the undersigned laity and clergy of the United Methodist Church, issue a formal complaint against fellow United Methodist layperson Jefferson Beauregard Sessions," reads the letter, which was provided to Religion News Service.

"While we are reticent to bring a formal complaint against a layperson, Mr. Sessions' unique combination of tremendous social/political power, his leading role as a Sunday School teacher and former delegate to General Conference, and the severe and ongoing impact of certain of his public, professional actions demand that we, as his siblings in the United Methodist denomination, call for some degree of accountability."

Dave Wright, an ordained United Methodist elder and chaplain at the University of Puget Sound, is the chief author of the letter. He said he hopes the complaint will result in pastoral conversations between Sessions and church leaders.

"My ideal outcome is that his pastors in church leadership who know him will speak with him, and that in those conversation he will be challenged to think through the level of harm he is causing and have a change of heart — which is about as Methodist as you can get," Wright said.

Of the four charges against Sessions, the first three — child abuse, immorality and racial discrimination — are in reference to the border policy. The last, regarding the dissemination of doctrines against Methodism, follows Sessions' attempt to defend separating families during a speech Thursday, in which he rebuked "church friends" who criticized the policy by insisting its enforcement is biblical, citing Romans 13.

It is "very unusual" for a complaint to be brought against a layperson in the United Methodist Church, Watson said. In recent history, several professors noted, most complaints have been brought against clergy who have performed or entered into same-sex marriages, as the country's second-largest Protestant denomination has been roiled by debate over the inclusion of its LGBT members.

John Feagins, an ordained UMC elder in the Rio Texas Conference who has taught church polity to pastors, said the letter sets in motion a process that allows a pastor or district superintendent to resolve the issue with the accused pastorally, possibly through a process involving a third-party mediator that United Methodists call "just resolution." Just resolution focuses on "repairing any harm to people and communities, achieving real accountability by making things right in so far as possible and bringing healing to all the parties," according to the Book of Discipline.

The letter concluded: "We look forward to entering into the just resolution process with Mr. Sessions as we seek to journey with him towards reconciliation and faithful living into the gospel."

If no resolution can be reached, that person's case could go to a committee on investigation or eventually a church trial. In a worst-case scenario, the court could remove him or her from membership, but the denomination's rulebook also makes allowances for lesser punishments. That could include things like losing the ability to hold office as a delegate or teach Sunday school.

Sessions, who attended the Methodist-affiliated Huntingdon College in Montgomery, Ala., has served as a lay leader and chairman of the administrative board in his family's church, Ashland Place United Methodist Church in Mobile, Ala.

Feagins noted that ending Sessions' membership would not be the same as excommunication, which does not exist in the United Methodist Church.

"The goal of a process like this is not the expulsion of someone, but the resolution of conflict — that's very important, because these things are about a person's relation to the church," Feagins said. He said that while he did not sign the letter, he did help author a resolution in his own conference with similar language that asked the attorney general to halt the policy.

Sessions did not publicly respond to the UMC complaint.

No Methodist politician has been similarly charged in a letter of complaint in recent history — at least not "of this nature," said Kenneth J. Collins, a professor at Asbury Theological Seminary, pointing to the sheer number of people who signed on to the complaint against Sessions. Former President George W. Bush and former first lady Laura Bush are United Methodists, as is former Secretary of State and Democratic presidential nominee Hillary Clinton.

Both Laura Bush and Clinton also have spoken out this week against the border policy defended by the attorney general.

"I think a lot of people from a variety of theological positions are very concerned about what's going on regarding the separation of families," said Watson. "It is really extraordinary for a public official and a layperson to be brought up in this way, but on one level, it doesn't surprise me given the nature of what's going on."

The letter noted that various elements of the United Methodist Church already have spoken out against the policy and Sessions' defense.

Earlier this month, Bishop Kenneth H. Carter, president of the Council of Bishops, signed on to a statement along with a number of prominent faith leaders urging the Trump administration to stop separating families. The Rev. Susan Henry-Crowe, general secretary of the denomination's General Board of Church and Society, released a statement Friday calling Sessions' use of Scripture to justify the practice a "shocking violation of the spirit of the Gospel," pointing to the Social Principles of the United Methodist Church, and Bishop David Graves, who heads up the attorney general's home conference, published a statement Monday asking lawmakers to reunite families.

The signers of the complaint against Sessions — who all are clergy and laypeople, but not bishops — said the attorney general's "actions and the harm he is causing to immigrants, migrants, refugees, and asylees calls for his church to step into a process to directly engage with him as a part of our community."

"While other individuals and areas of the federal government are implicated in each of these  examples, Mr. Sessions — as a long-term United Methodist in a tremendously powerful, public position — is particularly accountable to us, his church," it continues. "He is ours, and we are his. As his denomination, we have an ethical obligation to speak boldly when one of our members is engaged in causing significant harm in matters contrary to the Discipline on the global stage."

The complaint is just the latest in a deluge of faith-based pushback against the policy of separating families along the border.

The president of the U.S. Conference of Catholic Bishops issued a statement last week condemning the policy, and individual bishops have suggested sending a delegation to the border, protesting outside courthouses and instituting "canonical penalties" for Catholics who carry out the policies. That same week, the Southern Baptist Convention also passed a resolution at its convention calling for immigration reform that maintains "the priority of family unity."

A slate of other Christian denominations such as the Presbyterian Church (USA), the Episcopal Church and the Evangelical Lutheran Church in America have also either issued statements or had their leaders sign on to letters blasting the policy, as have numerous non-Christian groups such as the Islamic Society of North America, the Union for Reform Judaism and Buddhist leaders.

Only the United Methodists, however, can threaten the attorney general with spiritual discipline as well as opprobrium. Ted A. Campbell, professor of church history at the Perkins School of Theology at Southern Methodist University, said he could think of only one instance when a lay member had been removed from church membership. In the 1970s, he said, a member of a "fundamentalist" church had joined a small United Methodist congregation in Tennessee with the intent to convert its members to his beliefs.

"Apparently, the guy was so obnoxious they couldn't get rid of him, so they dusted off that part of the Book of Discipline and actually went through the process of a trial of a church member and removed him," he said.