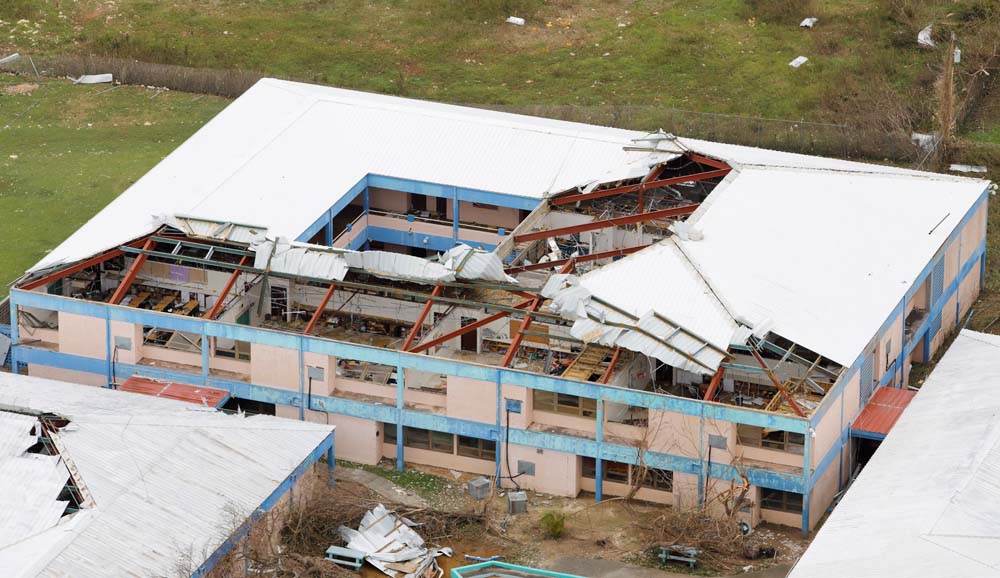 A severely damaged school in St. Croix in the U.S. Virgin Islands is seen in an aerial view taken Sept. 21 in the aftermath from Hurricane Maria (CNS/Jonathan Drake, Reuters)

NEW HAVEN, CONN. — A father of three who has lived in Connecticut for almost 25 years decided to seek sanctuary in New Haven's First and Summerfield United Methodist Church after his request for an emergency stay of removal was denied Nov. 29.

According to the Hartford-based Eyewitness News website, Nelson Pinos is an undocumented immigrant from Ecuador who turned himself in to Immigration and Customs Enforcement in 2012 in an attempt to regularize his immigration status. He was issued a final order of removal in 2015 but was allowed to remain in the country if he checked in with authorities periodically.

After being told to leave, and missing his flight back to Ecuador, Pinos can now be arrested if encountered by immigration authorities. However, First and Summerfield is able to protect him because authorities do not typically conduct enforcement actions in "sensitive" spaces such as churches.

The church has also sheltered Marco Reyes, another immigrant from Ecuador who was recently allowed to return to his family without fear of arrest as he pursues a court case.

WASHINGTON — PICO National Network, a network of faith-based organizations that works to solve problems in communities, and the National Latino Evangelical Coalition joined with several members of Congress Nov. 29 for a briefing on the need for hurricane recovery aid in Puerto Rico and the U.S. Virgin islands.

Members of the group included officials and residents from Puerto Rico and the Virgin Islands; the Rev. Gabriel Salguero, president of National Latino Evangelical Coalition; Denise Collazo, chief of staff of PICO; and six members of Congress, all Democrats.

"The National Latino Evangelical Coalition is very concerned that our fellow citizens in Puerto Rico and the U.S. Virgin Islands receive on-going, timely and equitable support and treatment commensurate with the devastation they have faced. Our faith compels us to speak up with the millions of our sisters and brothers," said Salguero.

EAST GOSHEN, PA. — Three dozen demonstrators, many of them members of the East Goshen United Church of Christ, participated in a prayer march in protest of the Sunoco Mariner East 2 pipeline Dec. 2 the West Chester, Pennsylvania, Daily Local News reported.

The protesters carried signs along the pipeline right-of-way for a half mile, pausing for prayer several times. The pipeline route runs less than 100 feet from an assisted living facility and from Sts. Peter and Paul School, a Catholic elementary and middle school.

Melissa DeBernardino, whose children attend Sts. Peter and Paul, said the archdiocese has not responded adequately and plans to remove her children from the school if the pipeline is completed.

The pipeline is planned to span 350 miles and carry ethane, butane and propane from shale deposits in West Virginia, Ohio, and Pennsylvania. A representative of Sunoco said the company has exceeded federal safety requirements.