Leadership style, a comparison between Dr. King and Pope Francis 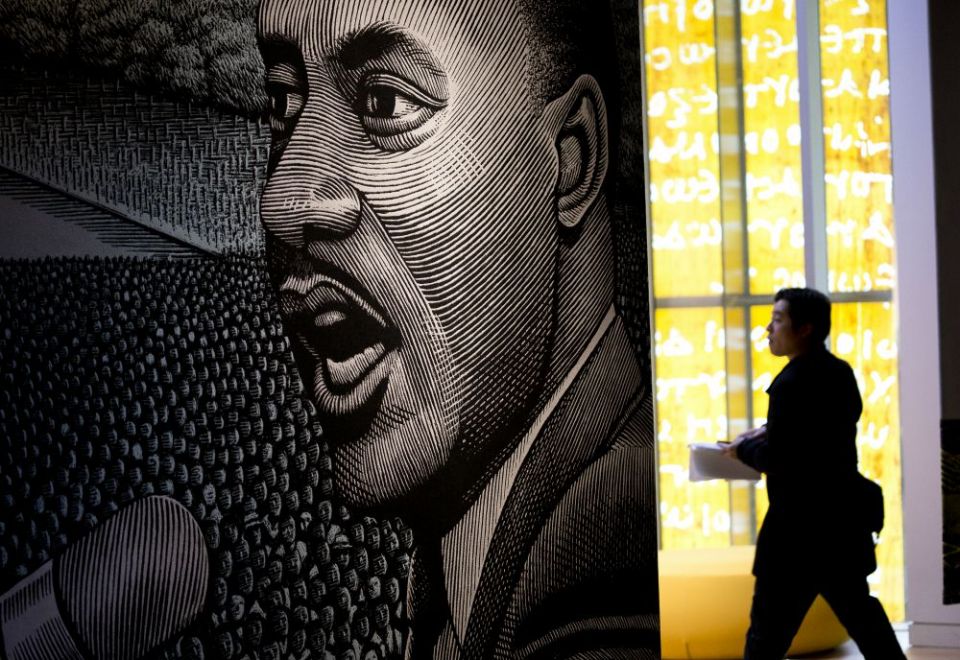 A mural of Martin Luther King Jr. is seen inside the "Bible in America" exhibit at the Museum of the Bible in Washington Nov. 15, 2017. (CNS/Tyler Orsburn)

Martin Luther King Jr.'s words left an indelible mark on our eyes and our ears. Nothing but the Gettysburg Address is so imprinted on the scroll of American history than the "I Have a Dream" speech, to cite only the most incandescent of his exhortations. That legacy also bolsters the case for Providence. If he had preached earlier or later in the century, his eloquence and charisma might have been limited by circumstance. One could argue that he appeared on stage at just the right time, now unimaginable at any other.

As it happened, Dr. King delivered his soaring message as television coverage was ramping up its McLuhan-esque "medium is message" magic of immensely powerful, enigmatic impact. Its scope ballooned to national and international dimensions. A decade or two earlier, he would have been limited principally to radio and movie theater film clips. His influence would surely have been felt, but his suddenly emergence as a major figure in the cultural and political realm would likely have needed much more time to ripen. And the time for such a prophet and activist was ripe right then.

Not only were his person and his speech and his courage instantly on view to millions of Americans, his actual words can still be recalled and quoted, from the Birmingham jail to the Lincoln memorials. His marches into the teeth of danger and death in the blast of fire hoses and at-the-ready firearms are internally retained by millions of people, friends and enemies.

That drama, therefore, has roots in concrete memory, functioning still to inspire inheritors of the struggle for justice that has suffered recurrent setbacks and disillusionments. A model of spoken word and brave action whose star might have faded as the cause itself felt defeat and lack of faith has remained a source of unparalleled inspiration to start anew. Other black leaders occupy stellar places in that pantheon of civil rights leaders, but Dr. King is the illustrious canopy whose presence precedes them in a kind of mystical eminence founded and sustained by those concrete luminous words and actions.

It is difficult to envision leadership of that stature arising in any such way these days, sorely needed as it is. For one thing, words seem far less able to capture the public imagination. There are simply too many of them being sprayed and bombarded across our audio/visual bows in laser profusion. Language becomes debased and without meaning in relentless barrages that fade as soon as they appear. Lies infiltrate whatever truths may shoot by in undifferentiated fashion. Obviously Donald Trump has sped up the assault on words by playing fast and loose with their inherent dignity. Reactions to him accelerate the maelstrom. Academics like to claim there is "discourse" on issues vital to national life. Language is so degraded it's hard to find much evidence of such high-minded discussion. A tidal wave of heated, nonsense words flood the airwaves and riddle the internet, but who remembers a word of it?

Thankfully, then, Dr. King got his words in while you still sort-of could, and, thankfully, they were so biblically sound, aesthetically imagined and profoundly preached that they are remembered.

Words did not suffice for him, however, unless they were backed up by street cred. He took seriously the saying that "faith without works" is dead, or, in secular parlance, words without willingness to put them into practice were practically meaningless. I say "practically" because words can have meaning in themselves, as Jesus demonstrates, but actions in an age that takes a less credible view of faith can be more important than attempting to persuade others that faith itself has validity. Actions can be the means of initial persuasion. Dr. King wasn't fearless, but he approached agents of death as if he were. He proved himself.

Our time is suffused with ordinary courage to take such risks for justice. We will sign petitions, scoff at claims that actions are effective, give a few dollars to a cause that might do it for us, but we're mostly scared. We've hunkered down in face of fears of terrorists, financial prosperity, reputation and a myriad other threats, real or conjured.

Remembering Dr. King reminds me of Pope Francis' style of leadership. He is a compassionate prophet full of pleas for the poor, the victims of brutality, the visionaries of a kinder, gentler church and the welfare of suffering human kind in general. In that, he reflects a loving, self-less posture that sends a clear message no less profound than Dr. King's. So far, though, nearly five years into his papacy, he has not appeared at the barricades or directed the church to place its assets, its personnel or its ethical partisanship behind any social or political efforts to shift power away from the tyranny of wealth and oppression, except very indirectly.

Pope John Paul II (be careful what you wish for) gained stature by aiding the particular force, solidarity, to gain success over communism. He deputized then Cardinal Joseph Ratzinger to run followers of liberation theology out of town. Those kinds of actions probably contributed more than anything else to the "Great" designation tacked on to his memorial. By no means does that require Francis to follow similar strategies, but he might translate some of his wise words into actions that give form to them. Making Junipero Serra a saint was not a step in that direction, I dare say. Francis may not by nature be open to this kind of broad partisanship and the confrontation that goes with it. His style is rightly his own. He appears to share Dr. King's sense of where the love and goods of the church should flow, but is very different in approaching that mission.

In his New Testament epistle, James put it succinctly in Chapter 2, verses 14-17;

"If a brother or sister is poorly clothed and lacking in daily food, and one of you says to them, 'Go in peace, be warmed and filled,' without giving them the things needed for the body, what good is that? So also faith by itself, if it does not have works, is dead."

Leadership style, a comparison between Dr. King and Pope Francis

Merton and King: spiritual brothers who never had a chance to meet