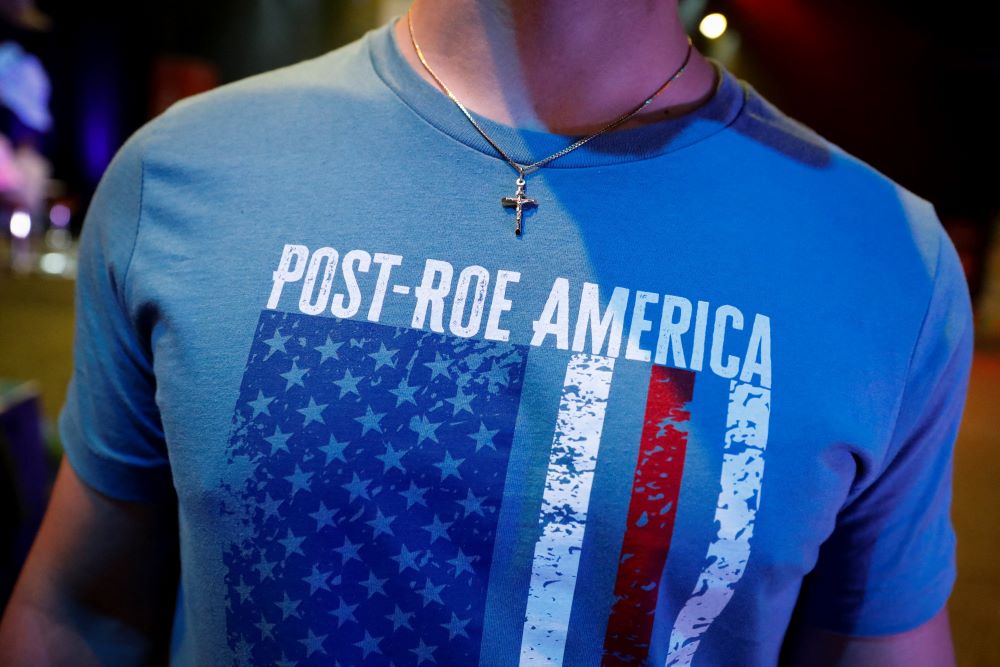 A student wears a crucifix and a pro-life T-shirt during a July 22 Turning Point USA Student Action Summit in Tampa, Florida. (CNS/Reuters/Marco Bello)

After receiving a text that there was a problem with one of her prescriptions and making two unsuccessful phone calls to clear up the issue, Annie England Noblin went to her pharmacy in the Missouri Ozarks.

Noblin hoped to go home with her prescription for, among other medications, methotrexate, a drug that can help reduce inflammation. "I take methotrexate basically so that I can function," said Noblin, who has been diagnosed with seropositive rheumatoid arthritis.

But when Noblin reached the front of the line, the pharmacist told her that her diagnosis would need to be confirmed by her doctor to ensure she was not using methotrexate for an abortion. Under a law triggered by the June 24 Dobbs ruling, abortion is banned in Missouri except for medical emergencies.

"I was absolutely livid to be told that in the pharmacy line, you know, in front of like everybody standing there," Noblin told NCR. "That's embarrassing, and it's infuriating, and it's demeaning."

Noblin's story is one of several that have come to light in several U.S. states since the Supreme Court overturned its 1973 decision in Roe v. Wade, which had guaranteed a constitutional right to abortion. 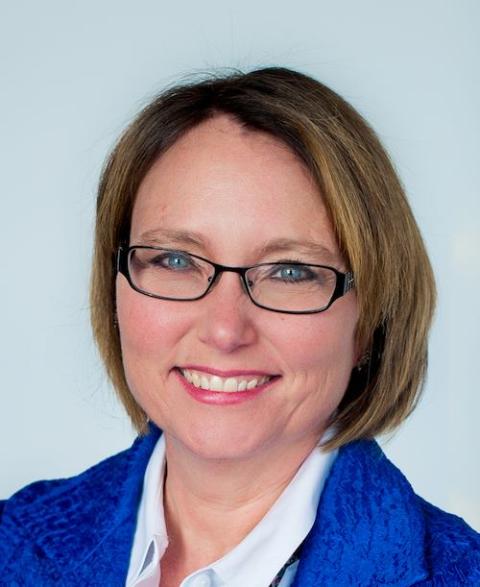 Originally a chemotherapy drug, methotrexate is among the most prescribed medications in the U.S. because it can be used to treat cancer, Crohn's disease, psoriasis, rheumatoid arthritis, lupus and other conditions. A small minority of patients are prescribed methotrexate to end ectopic pregnancies, and, in even rarer cases, the drug is used for medication abortions.

Ectopic pregnancies occur when the fertilized egg implants outside the uterus, and they never lead to a viable pregnancy. Instead, these pregnancies can cause life-threatening internal bleeding and maternal death.

Some states that have recently passed abortion bans mention methotrexate as an abortion-inducing medication. While these laws do not prohibit methotrexate's use for managing chronic illness, pharmacists and some doctors have become concerned about the potential legal and criminal consequences of violating these laws.

Noblin said she had never had a delay filling her prescription before. While she eventually got her medication, she worries about what might happen when she needs a refill.

"So much of your physical health sort of is hanging on the fact that you need to be able to take this medicine," she said. "And I always think, what if the next time I go to have it filled, they won't fill it?"

Zoe Rothblatt, associate director of community outreach for the Global Healthy Living Foundation, told NCR that, through GHLF's online community, she has heard of three ways people with chronic illness have been affected by more restrictive abortion laws: complete loss of access to the drug, difficulty accessing it and increased stress around sourcing the medication.

Women are disproportionately represented among people with conditions like lupus and rheumatoid arthritis. "This is an issue that can impact anyone with a uterus, and we're very mindful of that, but right now, we've been hearing this happen from women," Rothblatt said.

Meghan Clark, associate professor of moral theology at St. John's University, told NCR in an email that there has been a failure in the wider Catholic consciousness to develop an understanding of women's health that goes beyond pregnancy and childbirth.

"For decades, a generalized acceptable suspicion of women and their doctors has been cultivated by not only segments of the prolife movement but official voices of the Catholic Church," she wrote. 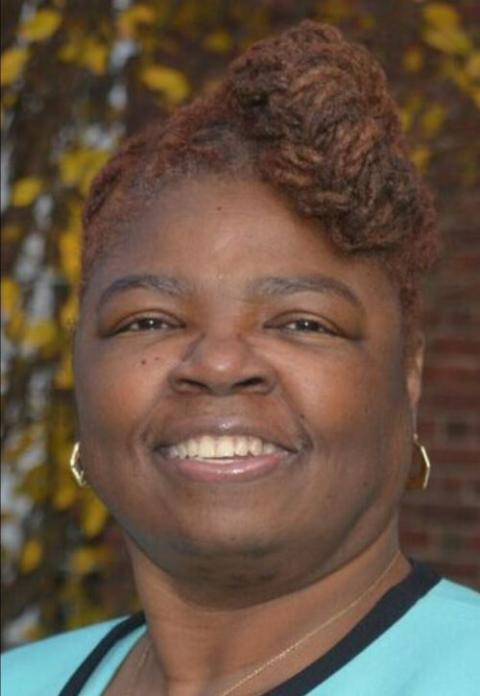 Valerie Lewis-Mosley, a retired nurse and adjunct professor of theology at Caldwell University in Caldwell, New Jersey, and Xavier University's Institute for Black Catholic Studies in Louisiana, said that she is concerned that health disparities may widen as a result of restrictions on methotrexate, particularly because of already concerning rates of Black maternal mortality and the disproportionate number of Black women among people with lupus.

"All of life is sacred. All of those issues that impact life are sacred. And so the focus on just the anti-abortion stance diminishes really the true sanctity and human dignity of life," Lewis-Mosley said.

Lewis-Mosley, who has lupus and has been prescribed methotrexate, said that some people with autoimmune diseases already had difficulty with medication access in the past few years because of misinformation about hydroxychloroquine, an antimalarial used to treat lupus and rheumatoid arthritis. Former President Trump and some of his supporters had wrongly said the medication was an effective COVID-19 treatment. That misinformation led to shortages of the drug. 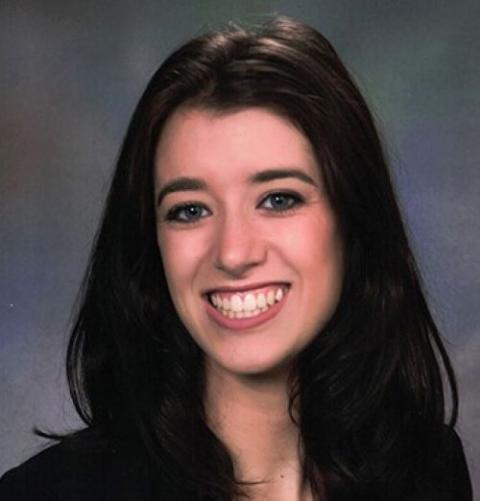 The New Republic reported on July 20 that CVS, one of the nation’s largest pharmacy chains, had issued instructions to pharmacists in six states with restrictive abortion laws to make sure before dispensing methotrexate that it would not be used to terminate a pregnancy. CVS pharmacists in those states were asked to confirm the diagnosis code provided by a doctor for the prescription.

These demands for additional documentation have resulted in delays for chronically ill patients. "Just missing an injection by a day can really have consequences for patients, and it's not something to be taken lightly," Rothblatt said.

For people who take methotrexate to treat inflammatory arthritis, "if a patient was delayed for too long, they could end up in a situation where they have a bad flare and have irreversible joint damage," Rothblatt said.

The biggest impact for people taking methotrexate now appears to be fear about whether they will be able to get the drug. Anna Hyde, vice president of advocacy and access at the Arthritis Foundation, told NCR that methotrexate is often prescribed in 30- or 90-day supplies, so some people with arthritis are still waiting to see if they will have problems accessing their prescription.

M. Therese Lysaught, a bioethics professor at Loyola University Chicago and a corresponding member of the Pontifical Academy for Life, noted that stress exacerbates conditions like lupus, rheumatoid arthritis and eczema, which are all treated by methotrexate.

Lysaught is among many Catholic ethicists who expressed concern about the women struggling to access methotrexate in the wake of the Dobbs decision.

Lysaught said that Catholic tradition has long taught that pregnant people with cancer can take methotrexate as a form of chemotherapy, even when that chemotherapy will terminate the pregnancy. Catholic moral theology teaches that in some cases the good consequences of an action outweigh the bad, or unintended, consequences.

"If it's OK to take methotrexate when you are actually pregnant to treat your cancer, knowing that it will kill your child even if that is not what you desire, then it's not even a question whether a woman can decide to take methotrexate when she is not pregnant to treat the different illness," Lysaught said. "That's the context in which we have to understand how completely and utterly bizarre and problematic this new issue is."

Tobias Winright, associate professor of health care ethics at St. Louis University, told NCR in an email that, unlike fundamentalist and evangelical Protestant health care ethics, which "tend to overgeneralize and to sweep on broad strokes — for example, prohibiting all abortions," Catholic moral tradition embraces nuance.

"Unfortunately, ever since the convergence of fundamentalists/evangelicals and Catholics in the 1970s and 1980s in opposition to abortion, I worry that many Catholics — laity and clergy, including bishops — are now unaware of the more nuanced Catholic moral tradition and see ethical issues such as these in an oversimplified way," Winright wrote.

Nathaniel Hibner, director of ethics for the Catholic Health Association of the United States, which is made up of more than 600 hospitals and 1,600 long-term care and other health facilities, told NCR, "We certainly have responsibility to try and respond to the needs of individuals who are experiencing chronic illness as a ministry of the church focused on the healing presence of Jesus."

"Our advocacy teams hopefully are becoming more aware of this situation and finding allies and partners in the legislative, pharmaceutical and professional society, so they might be able to influence regulations that are arising as well as try to protect and empower physicians and pharmacists to continue to provide the excellent care that they've been doing well before this case was handed down," he said.

A version of this story appeared in the Aug 19-Sept 1, 2022 print issue under the headline: New abortion restrictions threaten autoimmune patients' access to lifesaving drug.