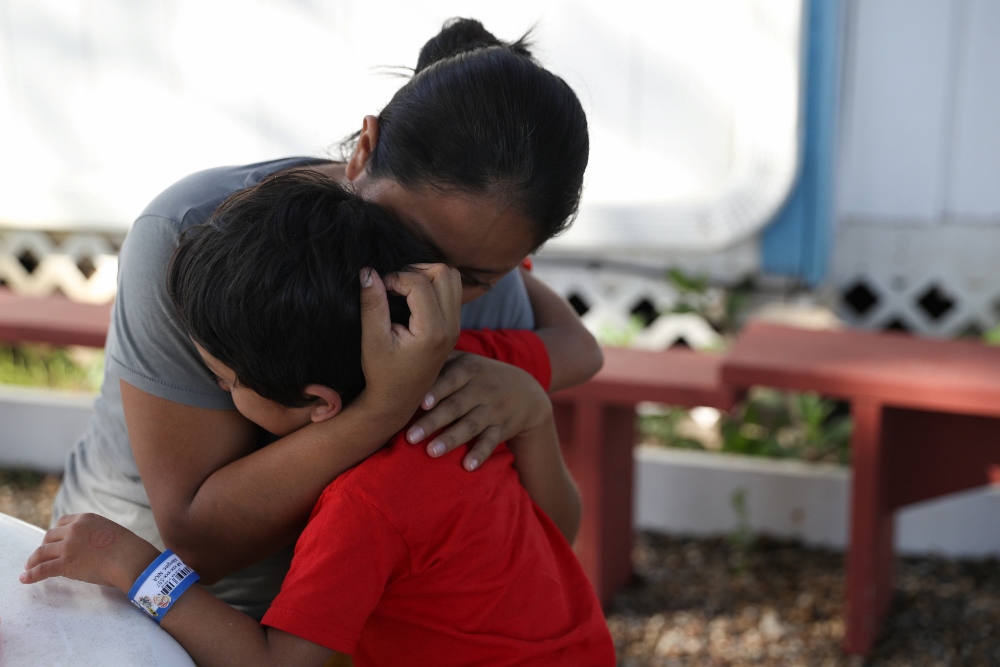 An asylum seeker from Honduras hugs her 6-year-old son July 13 at La Posada Providencia shelter in San Benito, Texas. The mother and son were reunited after being separated near the Mexico-U.S. border. (CNS/Reuters/Loren Elliott)

Patricia lived her entire life in the Valle de Juarez region of Mexico. She held a government job for a while and after that ran a store selling household goods. Then "strange, hooded" people visited her shop demanding a cuota or "share." But the amount was impossible to pay.

When headless and tortured bodies of those who couldn't pay appeared around town, Patricia, who asked to be identified by only her first name, packed up her four children and fled to nearby Ciudad Juarez, but the violence followed her. Gangs threatened her and her family unless she left the country, so Patricia sought asylum in the U.S. with her children.

After passing her credible fear interview and being supported by relatives and shelters, including Casa Vides in El Paso, Texas, Patricia is now living independently and working legally while her children thrive in school.

But still there is that fear that lurks in the back of her mind — the fear of deportation if she loses her asylum case. Patricia knows families that were sent back to Mexico, some who were killed after returning.

In another part of Texas, Adelia, identified by a pseudonym because she asked to stay anonymous, remains in a detention center in the town of Pearsall after arriving from Honduras with her son nearly seven months ago to seek asylum due to domestic violence.

Roughly the size of Missouri in square miles, Honduras has tight knit communities that make it difficult for domestic violence victims to find safety if they move away from abusers but stay within the small country.

"A lot of time, persecutors will go hunt people down," said Sara Ramey, Adelia's attorney and executive director of the Migrant Center for Human Rights. "Their abuser will come and find them and continue the persecution."

"If she had stayed one more month in Honduras, she would be dead because there was a man who hit her, who hit her too much and if not for the neighbors, he would have killed her with a machete," said Adelia's daughter, who requested anonymity.

Despite the extremity of the violence they are fleeing, both Patricia's and Adelia's chances of winning asylum cases and being allowed to stay in the U.S. with their children have recently been reduced.

On June 11, Attorney General Jeff Sessions took the unusual step of intervening in the immigration court system to overturn several Board of Immigration Appeals decisions, including one successful claim based on domestic violence.

In his decision in the case of a Salvadoran asylum seeker known as Matter of A-B-, Sessions said that claims based on domestic violence or gang violence should not usually qualify migrants for asylum.

But at least Patricia and Adelia will get the chance to argue their claims in court. Thousands of asylum seekers may not get that chance after U.S. Citizenship and Immigration Services (USCIS) quietly issued a policy memorandum July 11 that applies Sessions' decision to credible fear interviews in a way that could make it much more difficult for asylum seekers to even pass the first step for requesting protection.

Credible fear interviews are conducted when a migrant who recently arrived in the U.S. and would otherwise be subject to expedited removal expresses a fear of returning home. If the asylum officer finds a credible fear, the immigrant is at least temporarily allowed to remain and offered a full hearing to determine whether he or she qualifies for asylum.

"I think one of the things that's most disturbing about the policy memorandum is it goes much further than the reversal of the decision in the Matter of A-B-," said Camilo Perez-Bustillo, director of advocacy, leadership development and research at the Hope Border Institute in El Paso.

The memorandum directs officers to consider, in asylum claims based on "membership in a particular social group," that the standards Sessions set in his decision generally exclude claims based on domestic violence or gang violence committed by non-government actors.

This raises the standards for credible fear interviews, which determine whether an asylum seeker may pursue a case at all.

The threshold for establishing a credible fear is supposed to be low, said Victoria Neilson, senior attorney at the Catholic Legal Immigration Network (CLINIC), and the new higher standard might weed out some immigrants who could have successfully applied for asylum, even with Sessions' new guidelines. 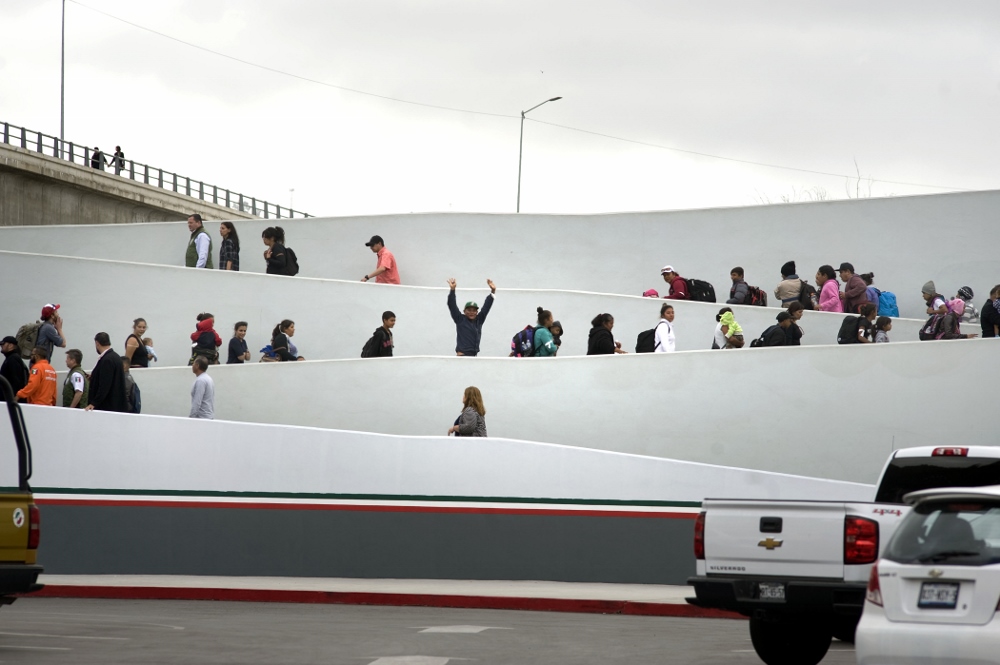 A young man waves his arms as he and other Central American migrants walk to the U.S.-Mexico border crossing April 29 in Tijuana, where they presented themselves for asylum. (CNS/David Maung)

Migrants who aren't familiar with the U.S. legal system and don't have legal counsel may not realize which parts of their story they should highlight to give them the strongest asylum claim, Neilson explained, causing valid claims to be overlooked at the credible fear stage.

The memo details how to determine what constitutes a particular social group as well as stating that for valid claims based on persecution by non-government actors, the government must condone the persecution or be "completely helpless" to prevent it.

The memo's only bolded statement says, "In general, in light of the above standards, claims based on membership in a putative particular social group defined by the members' vulnerability to harm of domestic violence or gang violence committed by non-government actors will not establish the basis for asylum, refugee status, or a credible or reasonable fear of persecution."

Neilson said that asking officials to pre-judge claims is counter to the fundamental asylum law principle that each case is unique and should be judged on its merits.

Sessions' decision and the policy memo also overturn precedent that recognized domestic violence as not simply a private crime but "a symptom of failed government and a failed understanding within society of women's rights as human beings," Neilson said.

"Similarly, the idea that gang violence is just sort of a one-off criminal act I would say disingenuously mischaracterizes the role that the gangs play in these three Northern Triangle countries where in many situations the gangs have essentially supplanted the government in those countries and rule over the people there through violence and terror," she added.

While the memo is couched in legalistic language, it's possible to read between the lines and see its intent to restrict asylum, especially for Central Americans, Perez-Bustillo said.

Nielsen and others echoed that interpretation.

"Does anybody really believe that Jeff Sessions is just interested in the academic distinction between what is and is not a particular social group?" asked Tisha Rajendra, a theology professor at Loyola University Chicago, whose focus areas include migration, human rights and Catholic social thought. Instead, she said, it seems obvious the administration wants to narrow the grounds for asylum and particularly exclude people of color.

This narrowing comes despite the fact that the United Nations has encouraged governments to expand the "particular social group" category to recognize people who do not fit neatly into the traditional categories for asylum seekers but are still fleeing for their lives, Rajendra said.

"The overriding principle of asylum law and refugee law is the principle of non-refoulement, the idea that you cannot deport somebody to their death," Rajendra said. 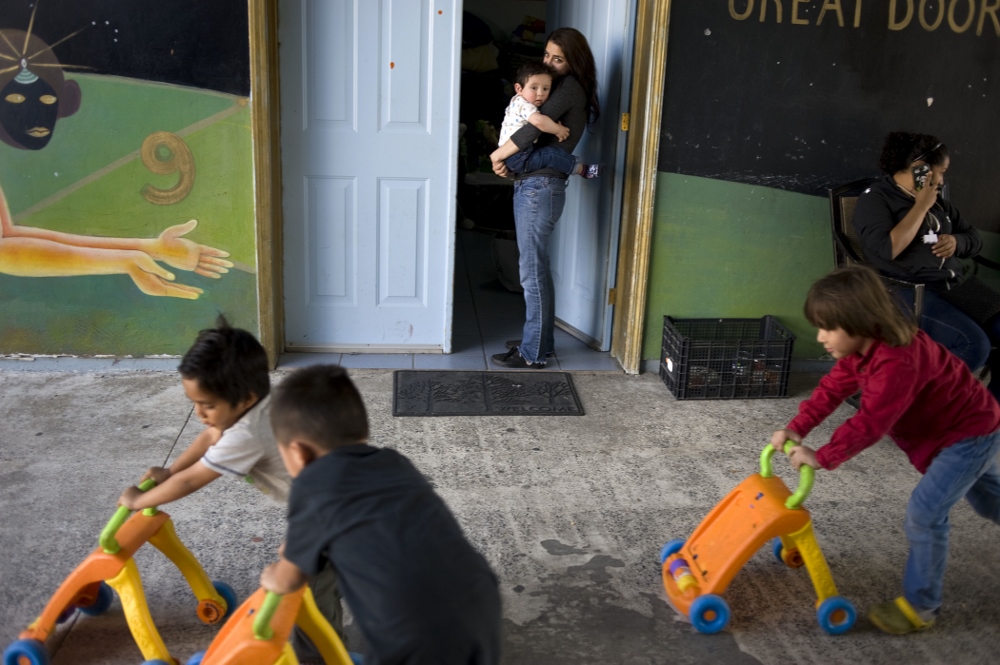 A volunteer watches children play at a shelter for migrant women and children in Tijuana, Mexico, June 20. The shelter is run by the sisters of the Missionaries of St. Charles Borromeo and has about 80 people who intend to seek asylum in the United States. (CNS/EPA/David Maung)

While it's clear the U.S. can't protect everyone, "if somebody is here saying 'they will kill me if I go back,' does it really matter from an ethical perspective whether 'they' are a government or a husband or a gang or a paramilitary force?"

The principle of non-refoulement has in the past overridden any concerns that an asylum seeker entered the country incorrectly, Rajendra said.

But in a section that emphasizes officers' ability to exercise discretion, the memo lists factors that they might weigh against asylum seekers who are otherwise qualified. Those factors include "circumvention of orderly refugee procedures," stays in or travel through other countries and past attempts to seek asylum.

Although the memo says officers should pay attention to the "totality of circumstances" and that "the danger of persecution will outweigh all but the most egregious factors," those statements are sandwiched between discussions of illegal entry as an adverse factor, except in certain circumstances such as escape from imminent harm.

"Basically, that criterion which should be fundamental and primary gets swallowed up," said Perez-Bustillo, who had noted earlier that the U.S. government is "construing discretion in multiple contexts to restrict rights rather than expand them."

He called making illegal entry an adverse factor a clear violation of international law, and noted that there is no requirement in U.S. or international law for asylum seekers to cross at ports of entry. "To the contrary, an asylum claim has to be appropriately addressed wherever it's presented."

From a Christian perspective as well, shielding people from danger should take priority over securing the nation's borders or determining immigrants' merit, said M.T. Dávila, a lecturer in Religious and Theological Studies at Merrimack College in North Andover, Massachusetts.

Catholic teaching goes even further than international asylum law, asserting that people have a right to migrate to protect themselves or their families, or to support their families economically, Rajendra said.

Dávila encourages people of faith to learn about laws that protect migrants' rights, and to realize that a true Christian anthropology emphasizes interconnectedness and dependence on God and others.

The law and Christian values "shouldn't be in tension, and where there's a tension, human dignity should resolve that tension," she added. "If borders don't uphold human dignity, then they're not serving the people of God."

[Maria Benevento is an NCR Bertelsen intern. Her email address is mbenevento@ncronline.org. Nuri Vallbona is a freelance documentary photojournalist. She worked for the Miami Herald from 1993 to 2008 and has been a lecturer at the University of Texas and Texas Tech University.]

Read this next: Immigrant families endure separation, court and uncertainty of 'zero tolerance'
A version of this story appeared in the Aug 10-23, 2018 print issue under the headline: New US asylum guidelines limit migrant chances.