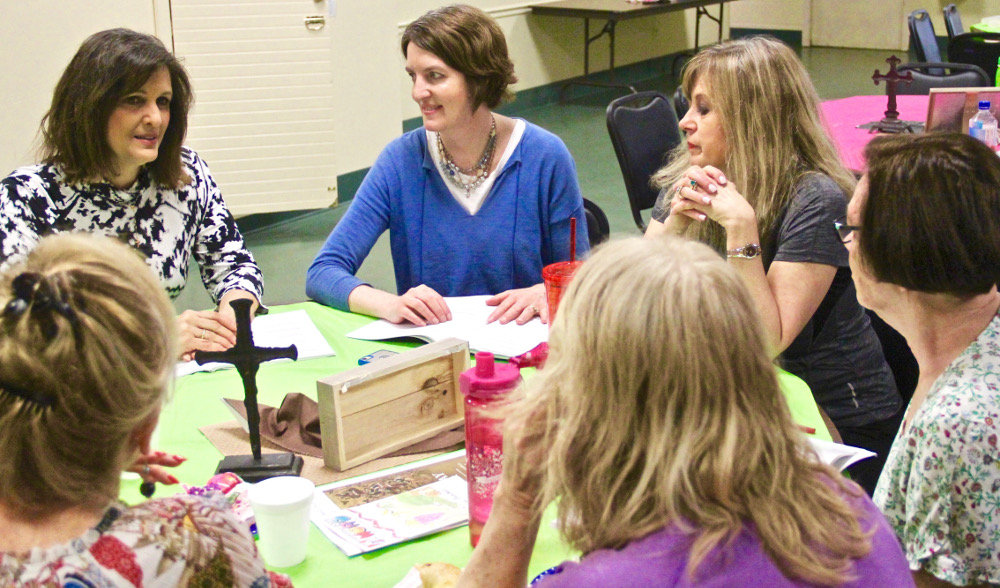 A faith-sharing roundtable discussion held by Nourish (Courtesy of Nourish)

A new program in Illinois is seeking to address a spiritual concern that has, until now, often gone unnoticed and unattended.

Nourish provides support for those caring for the permanently or temporarily disabled, rooted in a Catholic spirituality. It is a resource that, until recently, had been an unavailable comfort to many struggling to care for their loved ones.

The program is the result of a collaboration between Deb Kelsey-Davis and Kelly Johnson. They began the program at their local parish, St. Mary of Gostyn in Downers Grove, in the Diocese of Joliet, Illinois. Kelsey-Davis, a registered nurse and certified lay minister, left a corporate career when caring for her aged mother-in-law left her feeling spiritually drained.

"I realized that, even as a nurse, I didn't have everything I needed to care for her," Kelsey-Davis told NCR. "I became isolated and depressed."

Feeling that her experience was "God's way of saying 'you need to be doing something different with your life,' " Kelsey-Davis left her job "to devote my time and my talents to family caregivers and nourishing them," she said.

She turned to her parish for help setting up a workshop for family caregivers, and found that she could count on the clergy and lay staff to help her get the project off the ground.

Johnson, director of adult faith formation at St. Mary of Gostyn, also has caregiving experience; her son was diagnosed with brain cancer at the age of 5 (he is now attending college). She told NCR that in addressing the spiritual needs of parishioners, "caregiving kept seeming to pop up." So when Kelsey-Davis suggested a workshop for caregivers, Johnson began to help her put the program together.

"We quickly realized it wasn't a one-and-done kind of thing; this needed to be an ongoing ministry," Johnson said. As the director of adult faith formation, she thought "Great! Not a problem; I'll order some materials! Then I turned around to do so and found there were no materials to get. So Deb and I set about the task of creating the materials."

The women also realized that if there were no materials for them, there was also a dearth of material for all Catholic caregivers, and they decided to make the materials available for other parishes as well.

Designing the materials came with a "learning curve," according to Kelsey-Davis, but the women began by looking at which issues were most important to caregivers statistically and went from there, also drawing on existing literature and their own experience. Kelsey-Davis started a Facebook group for home caregivers, which provided "a wealth of information in observing what people are really struggling with," she said.

It is also important that the materials are "firmly rooted in our Catholic faith," Johnson said. Each topic includes a spiritual component. "There is a sense of understanding the graces and blessings that are a part of [the] caregiving journey."

Many traditional Catholic prayers are also included in the material, as well as new ones penned by Kelsey-Davis and Johnson.

The material is divided into three parts: First, planning and support mechanisms; second, roles and communications. "That touches upon things like family dynamics and learning to let go and work as a team" within the family, said Kelsey-Davis. The final section is on safety and quality of life.

The women found that there was demand for the program. Once they had begun to produce materials for local caregivers, other Catholic faith communities caught on. To the surprise of both Kelsey-Davis and Johnson, one diocese was soon adopting and implementing the material on its own.

After piloting the program at St. Mary of Gostyn for two years, Kelsey-Davis and Johnson decided to launch Nourish on a larger scale with a workshop, the same way they had begun, with the help of the diocese.

The founders of Nourish call the workshops "Prepare to Care," partly to bring people in during the early stages of caregiving.

According to the Family Caregiver Alliance, there were more than 40 million caregivers in the United States as of 2015, but Kelsey-Davis said many do not identify as caregivers, but just children, parents or other friends and family doing their duty toward their loved ones.

Those in this "invisible workforce," as caregivers are sometimes known, can find themselves mentally, emotionally and spiritually overwhelmed quickly, so Nourish seeks to find them early on in their journey so they can get the help they will need.

Nourish groups have monthly meetings for caregivers to connect and discuss a topic relevant to their lives. Past topics covered at St. Mary of Gostyin's Nourish group include, "The Realities of Stress and Learning to Cope" and "The Spirituality of Asking For and Receiving Help."

INourish helps connect caregivers through the Facebook group as well as webinars for group leaders.

"We didn't realize it would be an evangelical tool, [but Nourish] has started bringing people back to the church."

That first workshop found that there was a void Nourish could fill all over the region. Several people who work in parishes, jobs that can become exceptionally busy, attended. Even some pastors were there. By the end of the workshop, Kelsey-Davis and Johnson had found six more parishes interested in their program.

Since then, Nourish has continued to grow. The number of parishes working on their own Nourish groups has grown to 12 between their first workshop in September 2017 and mid-April. Nourish groups have been started in parishes in at least three dioceses. By April, Kelsey-Davis and Johnson say they were fielding calls from other interested dioceses almost every day.

Val Maty, the Joliet Diocese associate director of family ministry, told NCR that, like Johnson, she has seen a deep need for a program like Nourish. Maty refers people seeking spiritual services in the diocese to groups that can help them, but until Nourish appeared, she "did not have any support groups that were Christian-based" for caregivers.

Kelsey-Davis and Johnson have noticed that Nourish, as a parish-based program, is becoming a spiritual aid in another way. Many of the people who began attending the support groups had left or stopped attending church.

"We didn't realize it would be an evangelical tool," Kelsey-Davis said, but Nourish "has started bringing people back to the church."

[James Dearie is an NCR Bertelsen intern. His email address is jdearie@ncronline.org.]

This story appears in the The Field Hospital feature series. View the full series.
A version of this story appeared in the June 1-14, 2018 print issue under the headline: New parish-based program offers care to caregivers.