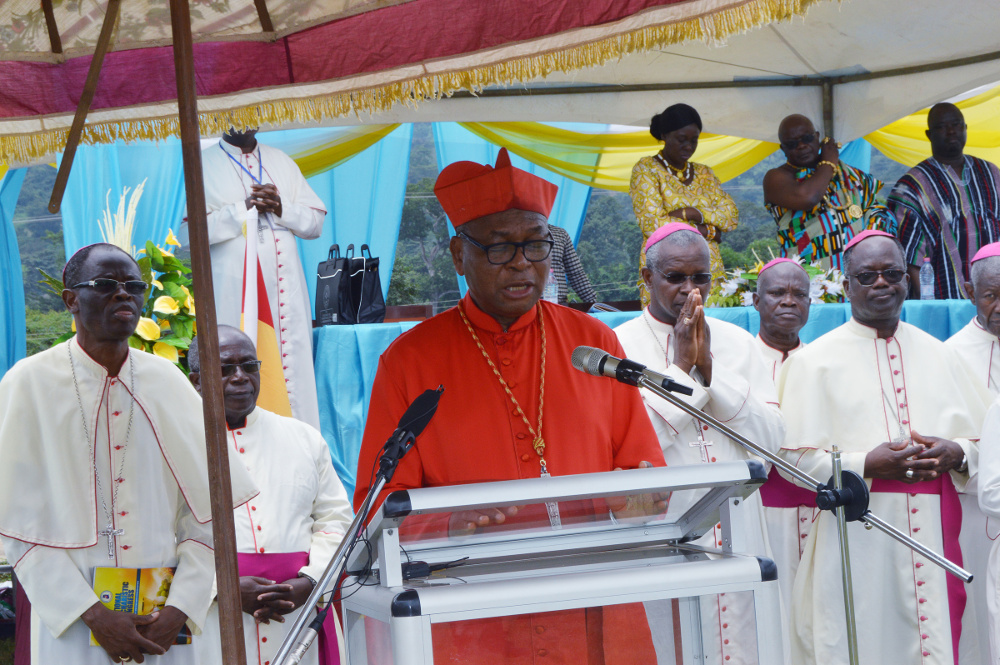 Pope Francis did not change church teaching on the rules for receiving Communion, but rather assured people who are in difficult situations that the church cares for them and the mercy of God extends to them, a Nigerian cardinal said.

Nigerian Cardinal John Olorunfemi Onaiyekan of Abuja, speaking at Ghana's National Eucharistic Congress in Jasikan Aug. 11, said it was unfortunate that pressure has mounted on the Catholic Church in some places to relax the rules about the reception of holy Communion.

Such pressure, he said, can be seen in efforts to allow divorced and remarried Catholics to receive Communion without an annulment of their marriage or without abstaining from sexual relations with their new partners.

The age-old principles of the unity and indissolubility of marriage cannot be compromised to accommodate "modern trends," he said.

"In a world going down the drain through widespread moral laxity, the church of God cannot abdicate her responsibility to uphold the high standards of the Gospel of the Lord Jesus Christ," Onaiyekan told Catholics gathered for the congress.

Pope Francis' apostolic exhortation, "Amoris Laetitia" on the family, clearly reaffirms the traditional doctrine of the church, he said.

In the document's final chapter, Francis raised the issue of some Catholics in problematic situations, not as the norm but as exceptional cases, the cardinal said. The pope spoke about those cases to encourage people who are in difficulty, and to assure them that the church is not unaware of their burdens and struggles, and that no one is excluded from the mercy of God.

But the mercy of God does not replace or cancel the laws of God and the rules of the church, the Nigerian cardinal said.

Participation in the Mass, even without receiving Communion, is not a futile exercise, Onaiyekan said. In Catholic tradition, that participation is referred to as "spiritual communion," and is an expression of faith that God find his way to anybody who is well disposed, whether or not that person is in a regular position to receive Communion.

"We must be thoroughly convinced that nobody is worthy to receive the Holy Eucharist," the cardinal said. "It means therefore, that whoever is in a position under the rules of the church to approach the holy Eucharist must do so with fear and trembling and with deep humility."

Because the church believes Jesus is truly present in the Eucharist, he said, "it follows naturally that the celebration of the Eucharist is the most sacred and holy act of the highest level."

And, he said, when the Second Vatican Council urged people "to fully participate in the holy Eucharist," it meant "that we should not just go to Mass and spend the time saying the rosary or worst still, reading newspapers or gossiping with others at the back of the church."

Over the centuries, Onaiyekan said, the church developed elaborate rules about the celebration of the Mass in order to maintain the right attitude and approach to the Eucharist itself.

But, he said, the rules "are not so rigid that there is no room for the Spirit to inspire us in many ways. In particular, especially in the Second Vatican Council, the church has opened a leeway for local churches in different parts of the world to look into the traditional patrimony of faith and religion of their people and creatively bring some of those elements into the celebration of the Eucharist."

But, he said, "these should not turn the Mass into a social entertainment or disco."

"Even when we beat African drums, it is always important to maintain the solemnity which the holy Eucharist deserves," he said. "In this regard, we do well to go back to the religious traditions of our people. The Spirit has inspired them to express their faith in God with music and dance that are meant precisely for that purpose and not for any daily social celebration."

The eucharistic congress was organized by the Ghana Catholic Bishops' Conference to coincide with Ghana's 60th anniversary of independence and included the rededication of the country and its citizens to Jesus in the Eucharist.