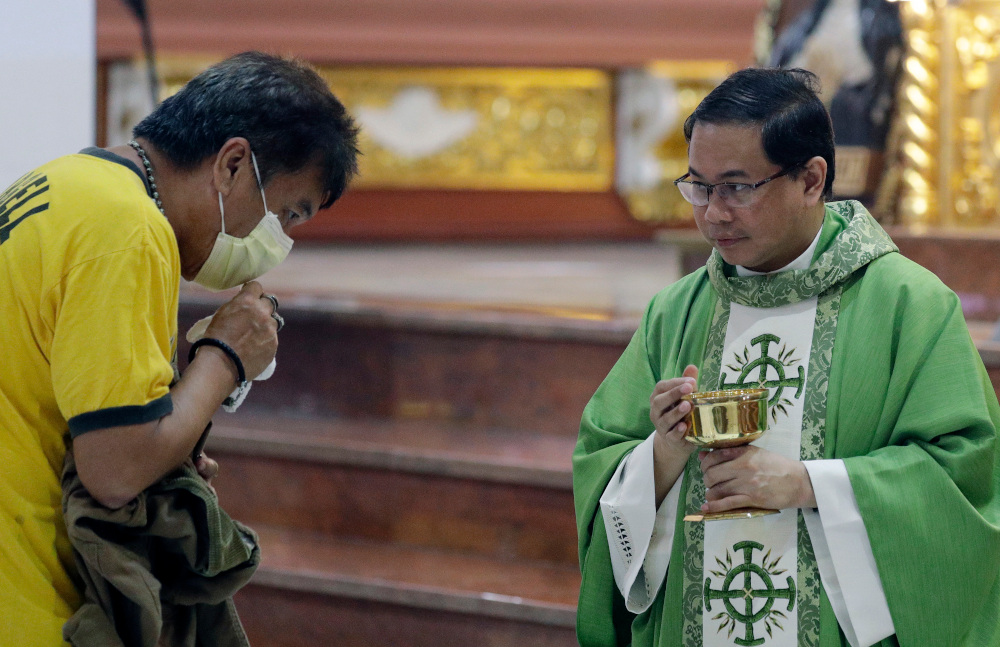 In this Feb. 10, 2020, photo, Catholic priest Fr. Joseph Arellano, right, looks at a man who forgot to take off his protective mask and tried to insert the host in his mouth during communion at a mass at the Minor Basilica of San Lorenzo Ruiz in Manila's Chinatown, Philippines. In a popular Catholic church in Manila, nearly half of the pews were empty for Sunday Mass. The few hundred worshippers who showed up, some in protective masks, have been asked to refrain from shaking or holding hands in prayers. (AP/Aaron Favila)

In a popular Catholic church in the Philippines, nearly half of the pews were empty for Sunday Mass. The few hundred worshippers who showed up were asked to refrain from shaking others' hands or holding them during prayers to prevent the spread of the virus that started in China.

In Hong Kong, Cardinal John Hon Tong, wearing a mask, announced the suspension of public Masses for two weeks and urged churchgoers to instead watch them online.

Buddhist temples, Christian churches and Muslim mosques have been ordered closed since Jan. 29 in mainland China, where the new coronavirus strain was first detected in the central city of Wuhan, the epicenter of the outbreak. Mosques have canceled weekly Friday prayers since January under an order to avoid "collective religious activities."

Religious leaders should encourage Muslims to "trust the party" and avoid crowds, the Communist Party-controlled body that oversees China's officially authorized mosques said in a statement.

The restrictions and dwindling crowds in religiously diverse places of worship underscore the extent of the scare over the outbreak that has permeated many aspects of life in the hard-hit Asian region. The virus has killed more than 1,500 people and infected more than 67,000 others, mostly in China, where several cities that are home to more than 60 million people have been placed under lockdown in an unprecedented effort to contain the disease.

All but three of the deaths have been in China. Japan, Hong Kong and the Philippines have reported one fatality each.

In Japan, where Buddhist temples and Shinto shrines are tourist destinations, a sharp decline in the number of foreign visitors has been a palpable setback. At normally popular Suzumushi, or Crickets, temple, a sign read, "Due to the impact of the COVID-19, no waiting expected," using the name given to the disease by the World Health Organization.

"We assimilate with parishioners and many other people. We know that the talk of the town is really this virus and it's obvious that many are scared," said the Rev. Siegfred Arellano, a priest at the Binondo church in the Philippine capital's Chinatown.

After consulting health experts, the Catholic Bishops Conference of the Philippines announced steps late last month to fight the virus. Churchgoers were advised to avoid hand contact and receive the Eucharistic host, the consecrated bread that Catholics believe to be the body of Jesus Christ, in the hand instead of the mouth.

They said holy water should be replaced more often in church stoups and a protective cloth installed on the grills separating priests and worshippers in confessional boxes.

In Hong Kong, Tong initially approved precautions that included a choice for churchgoers to watch Sunday Mass online. Those who opted to go to churches were asked to wear masks and told that "singing is suspended," except for short hymns like "Allelulia." The new virus is spread through respiratory droplets, according to health officials.

Tong later announced the two-week suspension of Masses, saying the move was crucial to suppressing the outbreak, and asked Hong Kong's 400,000-strong Catholic community not to panic.

Masses in Singapore's Catholic churches have also been suspended indefinitely starting Saturday to contain the spread of the virus. The city-state has reported that 67 people have been infected, including a senior pastor and several members of the Grace Assembly of God church, which has shut down two premises and quarantined all staff.

Crowds also have thinned at Bangkok's popular Wat Pho, a centuries-old Buddhist temple complex known for its giant reclining Buddha. The temple is normally visited by thousands of tourists, many of them Chinese, during the peak travel season from December to February, but large numbers of visitors as well as locals have stayed away since the outbreak began, said Phra Maha Udom Panyapho, a monk in charge of tourism at the temple.

A Protestant church in Seoul shut its doors and switched entirely to online worship services after one of its followers tested positive for the virus on Jan. 30.

Other Protestant churches in South Korea have sprayed their halls and rooms with disinfectant, canceled children's Bible school programs and asked followers to minimize socializing. Hundreds of Catholic churches in the country have halted the use of holy water stoups, allowed churchgoers to wear masks during Masses and discouraged those with flu-like symptoms or those who came from countries with confirmed cases of infection from attending.

Unlike public areas such as shopping malls, recreational centers and parks, discouraging the devout from going to their places of worship and imposing other restrictions on sacred sites can be extra sensitive. Amid the risks, some devotees consider going to religious gatherings as a test of faith.

"The virus can't dampen my faith," said Rey Gilber, a 55-year-old father of two who went to Mass at the Binondo church in Manila with his family. "God is always there and won't abandon us."

A key mosque in Malaysia's administrative capital of Putrajaya and two other mosques briefly closed their doors last month to non-Muslim visitors amid the virus scare, but later reopened after Prime Minister Mahathir Mohamad called the move irresponsible.

Tens of thousands of ethnic Hindus, meanwhile, gathered last weekend to celebrate an annual festival called Thaipusam in the central Malaysian state of Selangor, undeterred by the outbreak. Malaysia has reported 19 cases of the virus.

Still, hundreds of staff and temple workers along with two dozen ambulances stood by. Emergency medical outposts were established as a precaution at the Batu Caves temple on a limestone hill, where pilgrims and tourists descended to watch devotees pierce their skin with hooks and skewers and carry offerings up a flight of 272 steps to the temple.

"We will not get the virus because God exists here," said Saratha, a 60-year-old housewife.

Without a cure in sight, many Asians have turned to faith.

Religious leaders across Asia have issued public prayers for the sick to recover, the contagion to stop and governments and international health agencies to find a cure.

Indonesia, the world's largest Muslim-majority country, has not had any confirmed cases and residents walk about and pray in groups five times a day in mosques without masks. More than 60 people with pneumonia-like symptoms, including several foreigners, were placed under observation but later tested negative for the virus.

"The key is to keep praying and maintain your immunity," Putranto said. "Don't underestimate the power of prayer."