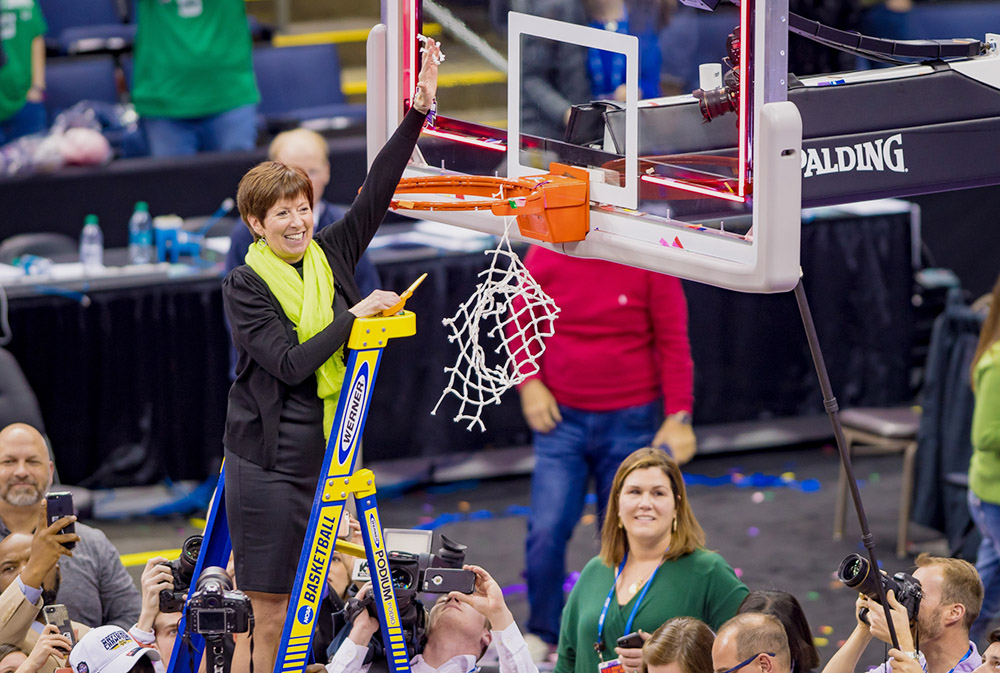 Muffet McGraw, head coach of the Notre Dame women's basketball team, cuts the net after her players defeated Mississippi State 61-58 April 1, 2018, in the championship game of the Final Four of the NCAA Tournament in Columbus, Ohio. It was the second time Notre Dame's women won the title. (CNS/Courtesy of University of Notre Dame/Matt Cashore)

Muffet McGraw, one of the most accomplished head coaches in college sports history, announced her surprise retirement last year after 33 seasons leading the University of Notre Dame women's basketball team. The Naismith Memorial Basketball Hall of Famer racked up 936 wins and two NCAA national championships in her career and has long advocated the expansion of women's leadership across society.

McGraw captured attention outside the sports world in 2019 when her Final Four press conference answer about her practice of hiring only female assistant coaches went viral.

McGraw picks up similar themes in her new book, Expect More!: Dare to Stand Up and Stand Out, which is billed as "a guide for women on reaching their potential." 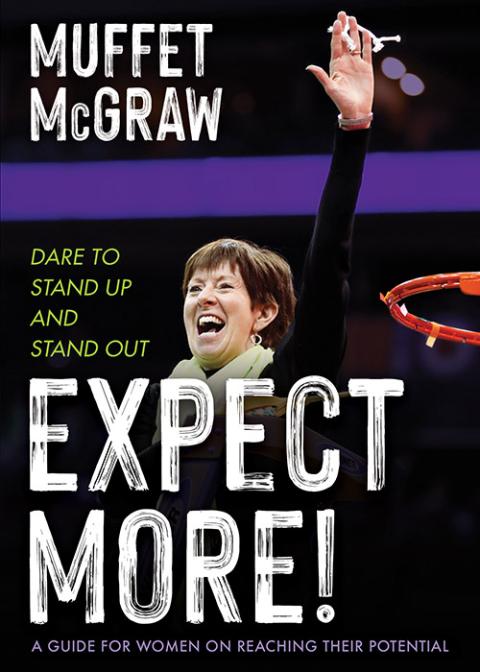 She told NCR in a recent interview that she decided to write the book because she "kept seeing what was happening to women in our game and to women across the country really, and thinking we've got to do better and we need to do more."

NCR: A big story right before the women's and men's NCAA tournaments started this year was the disparity between the weight room setups. What was your reaction when you saw that story going viral?

McGraw: Well, I was happy to see it, and I was happy that people were surprised to see it. Because I think we're shining some light on the inequities that have been there for decades.

Both the men's and the women's [teams] are playing on some college campuses. But you can't tell on the men's side if they're at Purdue or Butler. Because the NCAA has got a brand-new court with a beautiful March Madness logo in the middle of it. [The women are] playing at three schools in Texas who still have the regular court. So there's a three-point line for men and a three-point line for women. One court even has a volleyball court set up on it, with absolutely no signage. Then the courts in the Alamodome that the NCAA has provided for us simply say, "Women's Basketball" in the middle. The NCAA does not allow the women to use the March Madness [logo].

I think some of these things seem small to people watching. But there's so many. It's a pretty long laundry list of things that are inequitable. The problem to me is that they treat us as if we don't deserve better, and they're OK with it.

We have to ... enact change by raising our voices and making a stand, letting people know that we are not second-class citizens and we're not going to take it anymore.

This echoes themes from the famous press conference you gave at the 2019 Final Four when you were asked about hiring only women's assistant coaches. Your response went viral and was tweeted by people like Billie Jean King and Barack Obama. How did that moment change your life?

It really did change my life. People were waiting for someone to speak up. It really empowered me to know that my voice could speak for so many women in so many different businesses. It wasn't just sports.

To know that young women looking up could see this is a way to make change. This is something that we're allowed to do. We can use our platforms. I thought it was a really important role for me to play with my team. So that they could look up and see women do have a voice and we can make change, and this is how we have to do it.

I do feel like after my press conference, the NBA started to hire more women. Now you see the NFL is hiring women. Major League Baseball has a [general manager] who's a female for the first time ever in the sport. I think there's even one in hockey. So I think that it really kind of struck a chord with people across the country.

You had some players in recent years who were really engaged in racial justice work. Was that something that you intentionally invited them into?

Well, I've always been a proponent for women. I would always talk about women in power. When a prominent woman came to campus, she would come and speak to the team. Then I thought, I need to find out what [the players] are interested in. So we went around the room one day in the locker room and I just said, "What do you want to fight for? What's a big issue for you?"

That happened to be around the time of the "I Can't Breathe" T-shirts [which refer to the final words of Eric Garner before his death at the hands of a police officer]. So we decided that we would do that [wear them at a game]. I wanted them to feel like they had a voice and they could decide what we were going to fight for. That was what they chose that year. I was really happy that they did.

Notre Dame is, of course, a Catholic school. The church is also grappling with questions about empowering women leaders. Did you ever feel like the Catholic identity at Notre Dame worked against your message or your progress?

I did at first, I really did. The Catholic Church is a male institution run by men. So there were a lot of challenges. The way Notre Dame was structured was very male-oriented. I thought there were some stumbling blocks initially: when you looked at the administration and how few women there were — really, still are — on campus, even in the faculty.

Being a football school and then being so male-dominant was a challenge, but it was one that I embraced. I really wanted to make change. I wanted people to see that there are women here too, and we have a big role to play.

Notre Dame [now] has a female provost. I remember talking to [Notre Dame President] Fr. [John] Jenkins before that hire and just kind of hoping and saying, "Wouldn't it be great to have a woman in that position?"

I'm not saying I influenced his decision in any way. But it is great now — 250 years at Notre Dame, we finally have a woman in one of the top three positions.

If you were to talk to Pope Francis about women's leadership, what would you want to say to him?

I think he's a little more enlightened than some that we've had. I think he's willing to at least explore the question. I think that's about as much as we can hope for right now.

What messages do you have for parents of young daughters?

The most important thing in parenting is to let your kids fail. It's really hard to do. We don't like to do that as parents, because we want to make things as easy as we can. We want to help them. We want to fix things for them. They learn so many great skills when you don't step in and do that.

For girls, it's so important that we treat them the same way we would have treated our boys. We have to treat them the same when they're growing up. Because with girls, we praise them for things like getting along and being good sports, helping out and doing all those things. We kind of praise our boys for taking risks and being aggressive and doing things like that.

We're still busy telling our girls how pretty they are instead of how smart they are. When you go to the store and you go to the toy aisle and you see pink and you see blue, you got to say, "We're going over to the blue aisle and let's get us some Legos, some things we can build with." Because the stereotypes are really hard to break.