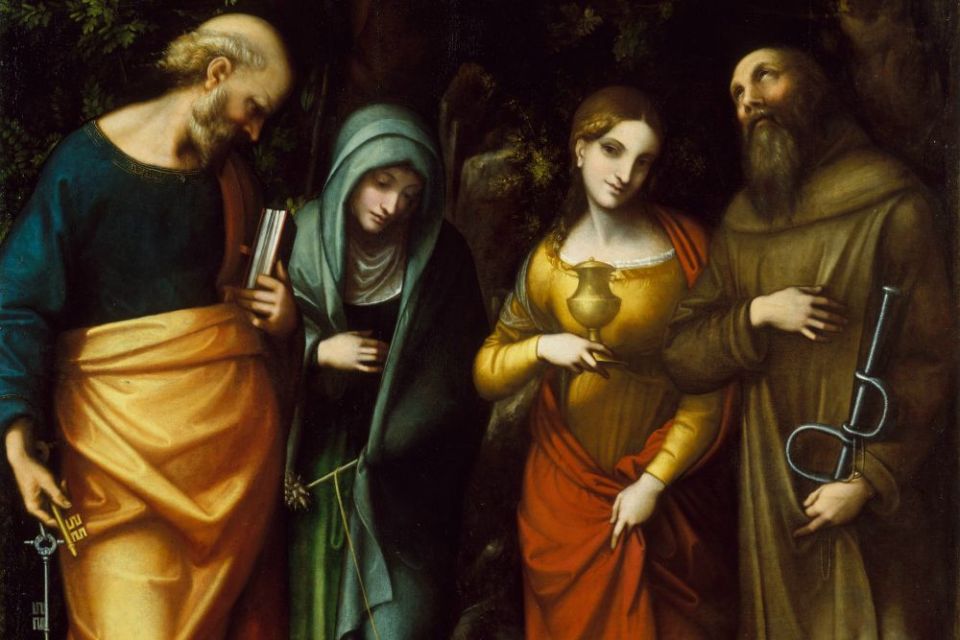 What we know about Mary Magdalene from the New Testament is precious little, but that didn't stop Pope Gregory the Great in 591 from preaching a sermon in which he conflated three accounts of almost certainly different women into one noetic portrait of the Magdalene.

As Margaret Arnold, associate rector of Grace Episcopal Church in Medford, Massachusetts, explains in her engaging new book The Magdalene in the Reformation, "Not content to leave so important a figure with the brief outline she receives in the canonical Gospels, Gregory chose the most orthodox possible method for fleshing out her personal history. Rather than invent a past, he simply identified her with two other characters in the New Testament." Think of it as sixth-century #FakeNews.

One of those other characters was the unnamed sinful (the text never says "prostitute") woman in Luke 7 who washes the feet of Jesus with her tears and pours oil on them. Jesus then forgives her sins. (Thus, we see many examples in history of the redeemed Magdalene being used as an inspiration to rescue prostitutes.) The other is Mary of Bethany, sister of Lazarus and Martha. This Mary wins accolades from Jesus for sitting attentively at his feet and listening to him while Martha runs around making sure the falafel doesn't overcook. 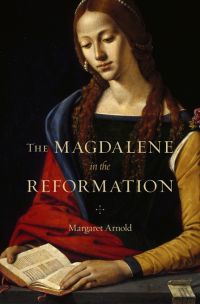 THE MAGDALENE IN THE REFORMATION
By Margaret Arnold
312 pages; Harvard University Press; 2018
$29.95

From there until today, Mary Magdalene has been used and misused for countless theological, ecclesial and even political purposes. She has been nothing if not what Arnold calls "a compelling and malleable image," whether we mean the real Mary or Gregory's amalgamated figure.

Arnold picks up the labyrinthine Magdalene story in medieval times and then spends most of the book on the varied ways both Catholics and Protestants used her in the time of the 16th-century Protestant Reformation and the Catholic reform movement that followed to buttress their arguments. It's a fascinating story, even if Arnold's version of it isn't quite complete.

"Mary Magdalene," Arnold asserts, "was central to the development of core theologies and institutions of both Catholic and Protestant reform." And for readers outside of the academy who don't keep up with the thrusts and parries of biblical scholarship, it's mostly an untold story.

Mary wound up being drafted for several purposes related to reform. First, because she was the one to announce to Jesus' followers on Easter morning that he had risen, she became a model for preachers — including women — in harmony with the Protestant idea of what the Second Helvetic Confession calls the "priesthood of all believers." For Catholics, of course, and even for many Protestants, including Martin Luther, the idea of female preachers based on the Magdalene was a nonstarter.

Beyond that, she became the holy penitent, based on the Luke 7 story about some other woman. And she became a model for meditation and introspection based on the story of Mary of Bethany sitting at Jesus' feet. Catholics emphasized at least parts of those two latter roles while Protestants, who were moving away from the idea of saints, deemphasized some of the same parts.

It's not that there wasn't some pushback against Pope Gregory's three-in-one Magdalene. Both Catholics and Protestants, especially John Calvin among the latter group, sought in various ways to disentangle the Gregory composite figure, though never with unmitigated success.

Speaking of Calvin, father of what now is called the Reformed Tradition (think Presbyterians), Arnold's focus on the Reformation is almost, though not quite, synonymous with a focus on Calvin's approach to it. The Reformation that Luther began got splintered in various ways, and in 1529, Luther and others, recognizing the need for reformers to speak with more of a unified voice, gathered in Marburg, Germany, to settle their disputes. (The French-born Calvin was just coming of age then and did not attend.)

They almost achieved consensus, except for the core issue of explaining what happens in the Eucharist. That primary battle was fought to a draw between Luther and Swiss reformer Ulrich Zwingli, who thought the bread and wine were just symbols of Christ's body and blood. A disappointed and disgusted Luther ended the gathering by declaring, "I would rather drink blood with the pope, than mere wine with the Swiss."

But who else was at the Colloquy of Marburg? The list includes Stephan Agricola, Johannes Brenz, Martin Bucer, Caspar Hedio, Justus Jonas, the important Luther colleague Philipp Melanchthon, Johannes Oecolampadius and Andreas Osiander.

What you won't learn in Arnold's book is what any of those reformers thought about Mary Magdalene or how they might have drawn on her image to press their own reformist agendas. In Arnold's account, Calvin pretty much sucks all the oxygen out of the list of possible reformers and their thinking, though she does give needed attention to how Quakers and Anabaptists think about Mary.

Still, there is much to recommend in this book.

Of particular interest is Arnold's persistent focus on one of the Magdalene's titles, "apostle to the apostles," which reflects her first-on-the-scene Easter role. Protestants and Catholics have used the idea in different ways to defend their own ideas about ordaining women or even allowing women to teach or preach. As Arnold notes, the Catholic Church found the apostle image troubling and "sought to emphasize instead the other features of her character." At the same time, she writes, "we see Luther carefully crafting an evangelical identity for the Magdalene."

In the end, a pliable Mary Magdalene winds up being a useful tool for almost everyone, especially women seeking their own place in the faith. But it would be fascinating to learn how close any of the varied portrayals of Mary have come to her own understanding of herself.

[Bill Tammeus is a Presbyterian elder and former award-winning Faith columnist for The Kansas City Star. Until October 2018, he wrote the "Small c catholic" column for NCR. His latest book is The Value of Doubt: Why Unanswered Questions, Not Unquestioned Answers, Build Faith.]